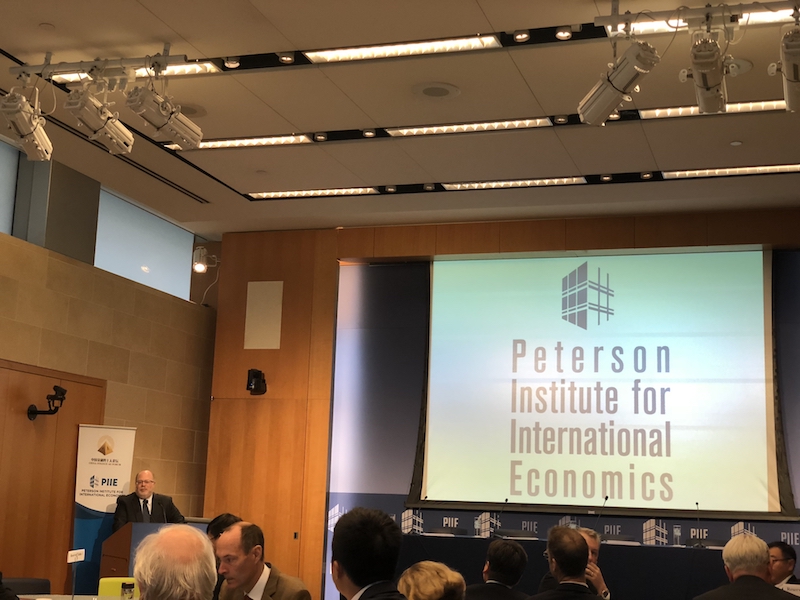 The Peterson Institute for International Economics and the China Finance 40 Forum jointly hold a discussion in Washington DC on Monday. (Photo: People's Daily)

Washington (People's Daily) -- The Peterson Institute for International Economics (PIIE), along with the China Finance 40 Forum (CF40), a noted independent economic think tank based in Beijing, held a discussion themed "US-China Economic Relations: From Conflict to Solutions" on Monday in Washington, DC.

PIIE President Adam Posen, speaking at his organization’s headquarters, presented 10 practical guidelines on the methods of handling the underlying economic conflicts between China and the US in a constructive manner.

Posen said slowing economic growth is likely to be a persistent reality for both China and the US, so international trade must be seen as helping against, not causing, the slowdown. The Trump administration's unilateral approach to trade disputes is counterproductive and is already proving self-defeating and harming growth.

The economic disputes that can be addressed using the World Trade Organization and other multilateral mechanisms should be solved in that way. Some current substantive disputes, such as over technology transfer and intellectual property, cannot be resolved in the current WTO framework, so new agreements must be reached, he said.

Posen also pointed out that bilateral trade deficits are not a reasonable or useful goal for trade policy to target. Agreements should govern commercial and government behaviors, not economic outcomes. In other words, Posen opposes managed trade. Where China wants to open its economy, subject to verifiable rules, it will benefit both China and the US.

He stressed that Chinese companies have a right to compete with their US peers, and to succeed in any sector – including in high-tech – but they do not have an entitlement to US-owned technology.

Posen said that the US should not try to block China’s increasing role in international economic governance. He said the Trump administration should not withdraw from the institutions and rules-based system its predecessors led in creating. Expanded two-way cross-border direct investment should play a role in improving China-US economic relations over the long-term.

Besides the China-US trade relationship, economists from the two countries also presented policy recommendations on opportunities and challenges as China opens its financial sector to the outside world.