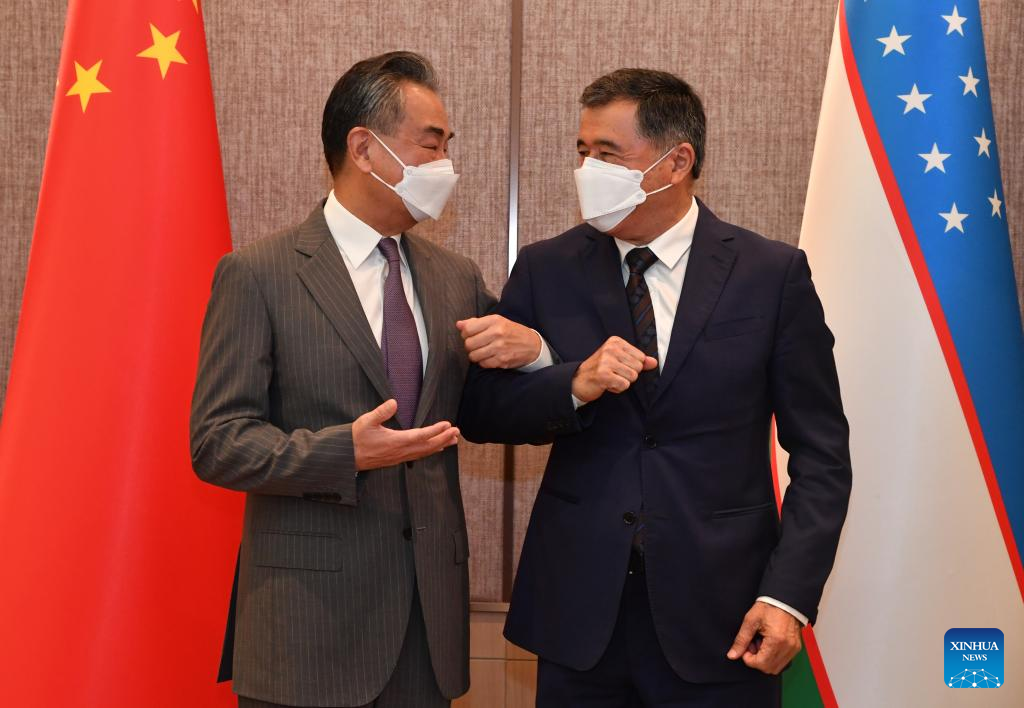 During their talks, Wang said that since the establishment of diplomatic ties 30 years ago, China-Uzbekistan relations have withstood the test of the changing international situation and grown stronger; their friendship has overcome challenges and become increasingly unbreakable; their cooperation has yielded fruitful results and gained more vitality.

Wang attributed the success to the strategic guidance of the two heads of state and the joint efforts of the people of the two countries.

China firmly supports Uzbekistan in safeguarding its national sovereignty, security and social stability as well as continuing to follow the path of development and revitalization in line with its national conditions, and opposes any external interference in its internal affairs, he said.

Wang said that China stands ready to follow the important consensus reached by the two heads of state to push forward the leapfrog development of bilateral relations and open up the next three decades of greater friendship, higher level of mutual trust, common development and shared prosperity between China and Uzbekistan.

Calling Uzbekistan and China good brothers and friends, Norov said over the past 30 years, the two countries have consistently respected each other, treated each other as equals, set an example of mutually beneficial cooperation and served as a stable anchor for regional peace and development.

The two sides have strengthened their friendship through mutual assistance in the fight against COVID-19, he said, noting that the two heads of state have maintained frequent interactions, jointly charted the course for the development of bilateral relations, and lifted bilateral cooperation to an unprecedentedly high level.

The cooperation mechanism between the two sides in various fields has operated smoothly and practical cooperation has achieved fruitful results, Norov noted.

Uzbekistan values its friendship with China and looks forward to learning from China's development experience to jointly push for a brighter future of bilateral relations, he stressed.

The Uzbek side speaks highly of China's key role in promoting the sustainable development of developing countries, especially in the fields of anti-coronavirus and poverty alleviation, he added.

Norov briefed Wang on Uzbekistan's preparations for the Shanghai Cooperation Organization (SCO) summit to be held in autumn and thanked China for its strong support.

Wang said that the Chinese side appreciates and supports Uzbekistan in actively fulfilling the duties of the SCO presidency, and is ready to work with the Central Asian country to gather more consensus and make comprehensive preparations for the summit.

The two sides agreed to continue to boost Belt and Road cooperation with high quality, select and implement a number of major projects, and raise the scale and quality of industrial and investment cooperation between the two countries.

The two sides will expand the joint production of vaccines. China supports Uzbekistan in establishing a regional center of vaccine production and research and development.

Meanwhile, China will continue to carry out Brightness Action program in Uzbekistan, provide free cataract surgeries for another 500 Uzbek patients, and set up a cooperation center for blindness prevention in the Central Asian country.

The two sides will also deepen people-to-people and cultural exchanges and sub-national cooperation. China welcomes Uzbek students back to China at an early date and will help the first group of them to return.

In addition, Wang and Norov exchanged views on issues including cooperation between China and Central Asia, and the situation in Afghanistan.