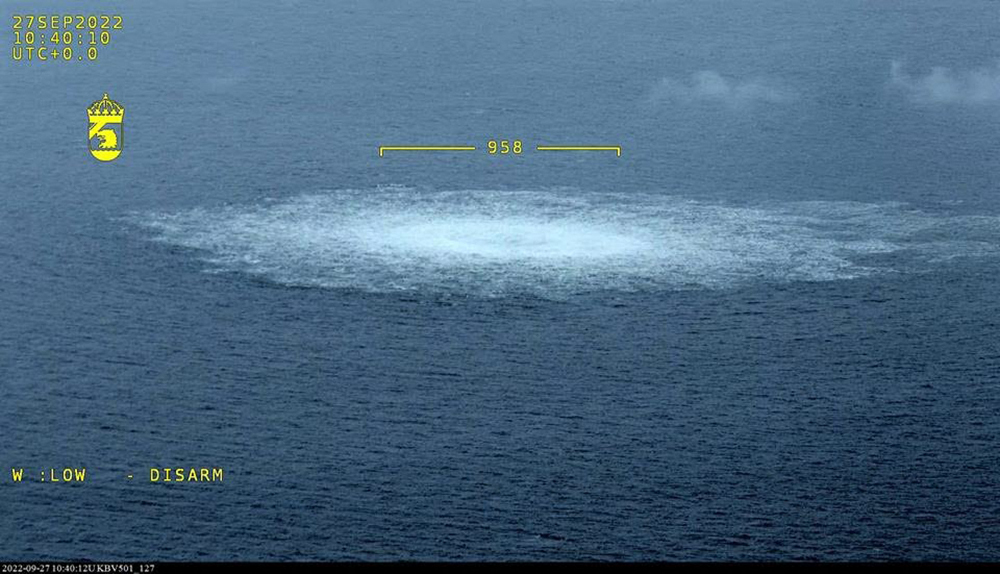 This handout photo released on September 27, 2022 and taken from an aircraft of the Swedish Coast Guard (Kustbevakningen) shows the release of gas emanating from a leak on a Nord Stream gas pipeline in the Swedish economic zone in the Baltic Sea, near the Danish island of Bornholm. (Photo: Agencies)

A Chinese envoy to the United Nations said on Friday China was seriously concerned about the recently reported leaks on the Nord Stream pipelines, and the leak was a catastrophe that China does not want to see.

The leaks led to the physical disruption of the pipeline to transport gas, exacerbating the problem of energy supply shortages in Europe, said Geng, adding that consumers around the world, including in developing countries, are likely to suffer the resulting turmoil in energy markets and rising energy prices.

While methane is still leaking from the pipelines, it will impact shipping routes and the ecological environment in the relevant sea areas, Geng said.

"At a time when Europe and the world are facing endless challenges, this is a bad catastrophe that we do not want to see," he said.

"We note that current information indicates that the leak was not an accident, but likely to be sabotage," said Geng. "If true, this would constitute an attack on multinational civilian facilities and undersea pipelines, in violation of international law."

"We also note that all relevant parties consider it necessary to conduct an objective, impartial and professional investigation into the leak," he said.

On Monday, Danish and Swedish officials said that leaks had been identified in two natural gas pipelines – Nord Stream 1 and its twin, Nord Stream 2 – under the Baltic Sea off the coast of Denmark's Bornholm island, near the exclusive economic zones of Denmark and Sweden.

Denmark's Prime Minister Mette Frederiksen said on Tuesday the leaks clearly were caused by deliberate actions and could not have been a result of accidents.

"There is no information yet to indicate who may be behind this action," she said at a press briefing in Copenhagen, adding that authorities do not see the incidents as a direct military threat against Denmark.

Meanwhile, the UN Security Council failed on Friday to adopt a draft resolution, which "condemns" the referendums held in four Ukrainian regions.

The draft resolution titled "Illegal So-Called Referenda in Ukraine," submitted by Albania and the US, was vetoed by Russia, one of the five permanent members of the council. China, India and the United Arab Emirates abstained.

China's position on the Ukraine issue is consistent and clear, Zhang Jun, China's permanent representative to the United Nations, said in his remarks in explanation of China's vote.

"We always maintain that the sovereignty and territorial integrity of all countries should be respected, the purposes and principles of the UN Charter upheld, the legitimate security concerns of all countries taken seriously, and all efforts conducive to the peaceful settlement of the crisis supported," said Zhang.

UN Security Council should play a constructive role in resolving the Ukraine issue, and give priority to regional peace and stability and the universal security of all countries, said Zhang, adding that actions taken by the Security Council should help cool the situation and facilitate diplomatic resolution rather than fueling tensions and causing further escalation.

China always stands on the side of peace, and will continue to play a constructive role, he said.