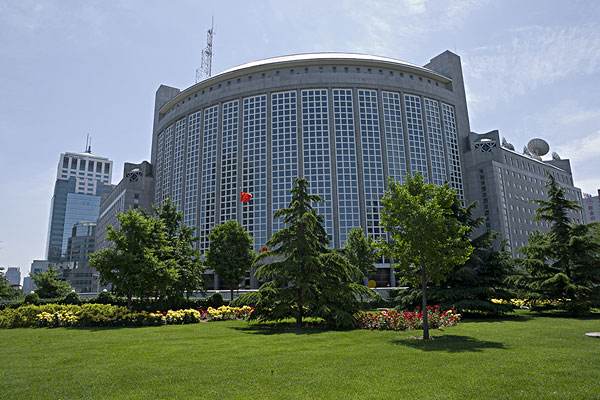 China will firmly fight back if the US continues to interfere in China's internal affairs and obstinately pursue such an agenda, the Chinese Foreign Ministry said Thursday.

“The act of the US has interfered in China's domestic affairs and violated the basic norms governing international relations. China firmly opposes and strongly condemns that,” Wang Wenbin, a Chinese foreign spokesperson, said at a press briefing.

“The issues Xinjiang faces are counter-terrorism and counter-separatism rather than human rights, ethnicity or religion. Xinjiang affairs are China’s internal affairs which the US has no rights to interfere,” Wang said.

The remark was made in response to the Trump administration imposing sanctions on the Xinjiang Production and Construction Corps (XPCC), an economic and quasi-military organization that plays a crucial role in the development of the Xinjiang region, and two associated officials, Peng Jiarui and Sun Jinlong.

“The XPCC workers live in peace and harmony as neighbors with people of various ethnic groups in Xinjiang; they share mutual support and assistance,” Wang said. “The XPCC has made an indelible contribution to the development of Xinjiang by promoting unity among all the ethnic groups, maintaining social stability and consolidating border defense.”

“The accusations made by the US side are nothing but rumors and slander,” Wang stressed.

He added that the Chinese government is determined to safeguard national sovereignty, security and development interests. It is determined to combat violent terrorism, separatism and religious extremism. Its position will not be swayed in opposing foreign interference in Xinjiang affairs and China's internal affairs in any way.

“We urge the US to retract its wrong decision immediately and stop making any remarks or moves that interfere in China's internal affairs and undermine China's interests. The Chinese side will firmly fight back if the US obstinately pursues such an agenda,”Wang said.