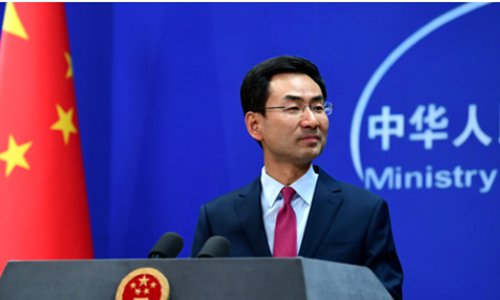 China warned Tuesday that the testing of a medium-range cruise missile by the US would start a new "arms race," one day after the US Department of Defense announced that it tested a new ground-based cruise missile which can hit a target after more than 500 kilometers of flight.

"The US move will trigger a new round of arms race, leading to an escalation of military confrontation, which in turn will have a serious negative impact on the international and regional security situation," Chinese Foreign Ministry spokesperson Geng Shuang said.

The US Department of Defense announced on Monday it had tested a type of ground-launched missile that was banned under the 1987 INF agreement, which limited the use of nuclear and conventional medium-range weapons.

The missile was launched from the US Navy-controlled San Nicolas Island off the coast of California.

Geng pointed out that the US land-based medium- and short-range missile test, which was previously prohibited by the Intermediate-Range Nuclear Forces (INF) treaty, came less than three weeks since it quit the treaty on August 2.

"This shows that the real purpose of the US' withdrawal from the treaty was to seek 'self-deregulation,' let go of the development of advanced missiles, and seek military superiority," Geng said.

"We advise the US to abandon the outdated concept of the Cold War mentality and zero-sum game, exercise restraint in the development of arms, and earnestly safeguard the existing arms control system," Geng said.

Moscow on Tuesday accused the US of ramping up military tensions with a new missile test. Russia's deputy foreign minister Sergei Ryabkov said the new US test was a "cause of regret."

"The US has obviously taken a course toward escalation of military tensions. We won't react to provocations," Ryabkov told state news agency TASS.

Ryabkov added that Moscow would refrain from using such missile systems "if and when we get them, as long as the US does not deploy them anywhere in the world."

Speaking in France Monday before news of the US test launch broke, President Vladimir Putin also said that Russia would only deploy medium- or shorter-range missiles in response to similar moves from the US.

"If the US produces such offensive systems, we will also do so," Putin said at a press conference before meetings with French leader Emmanuel Macron.

Putin said it was the US that made the decision to unilaterally withdraw.

The INF banned all land-based missiles that could travel between 500 and 5,500 kilometers, in an effort to abolish the class of nuclear arms that then most threatened Europe.