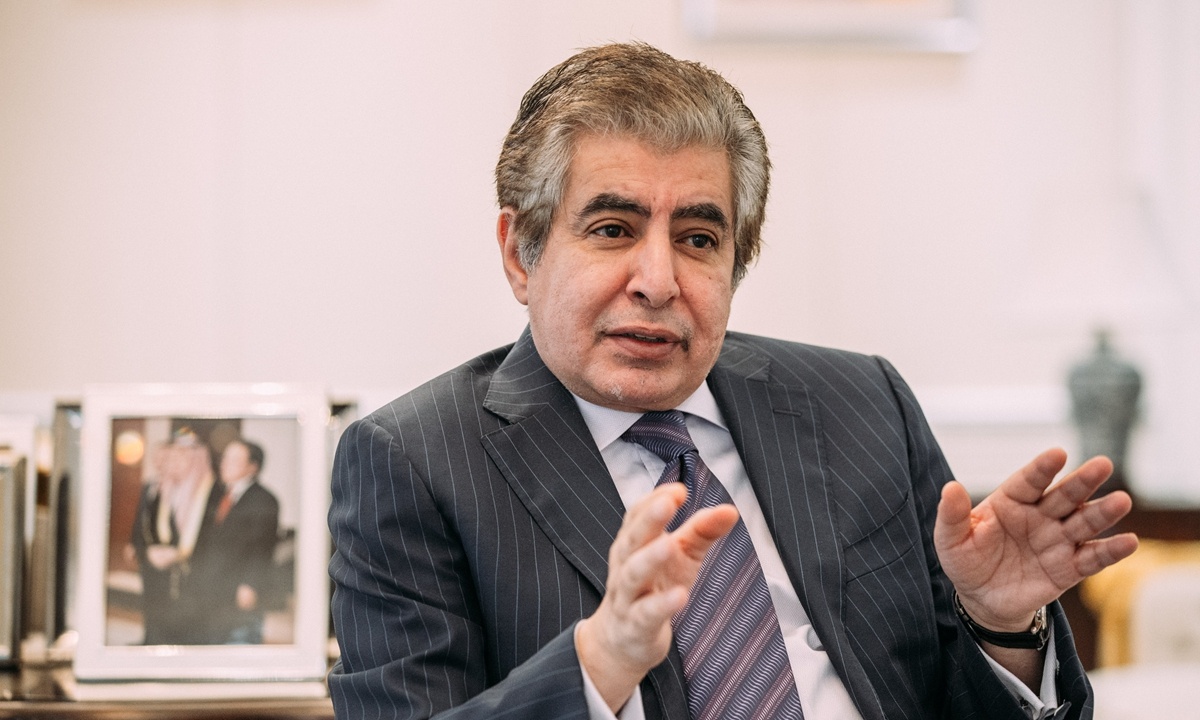 Saudi Arabia fully supports China's efforts in dealing with issues regarding the Hong Kong Special Administrative Region and the Xinjiang Uygur Autonomous Region as they are China's internal affairs, Saudi Arabia's ambassador to China said, noting that China-Saudi Arabia ties have been stable and solid both before and after the coronavirus pandemic.

As for the China-proposed Belt and Road Initiative (BRI) and China-Saudi Arabia collaboration in tackling COVID-19, Ambassador Turki M. A. Almadi told the Global Times in an exclusive interview that Saudi Arabia is the gateway in the Arab world for BRI cooperation with China and highly appreciates China's help in fighting against the deadly disease.

Principle of no interference

"Saudi Arabia's positions regarding Hong Kong and Xinjiang issues are clear: They are totally China's internal affairs," said Almadi. "We believe in the principle of no interfering of internal affairs of other countries, which is very important in international relations."

A total of 53 countries, including Saudi Arabia, have expressed their support for the passage of the Law of the People's Republic of China on Safeguarding National Security in Hong Kong, a Chinese Foreign Ministry spokesperson said in early July.

"We support the 'one country, two systems' principle, which is why we stand with China's position on this matter," the envoy noted.

He also stressed China is dealing well with the Xinjiang issue. "It is for the government of China to decide what is good for its people. China has the total sovereignty in its land." 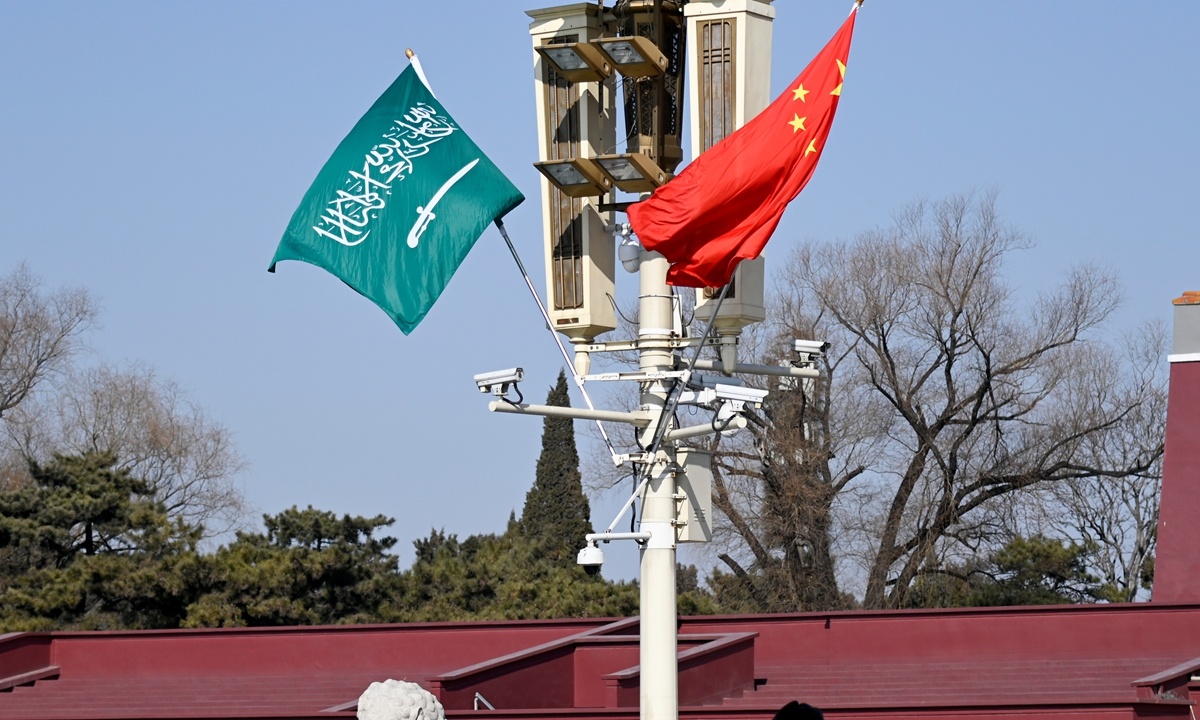 The national flags of Saudi Arabia and China are displayed from a road lamp at Tiananmen Square in Beijing on February 21, 2019. (Photo: AFP)

Asked why Saudi Arabia would hold the summit, Almadi said that "China is a very important player in the region, always has full understanding for Saudi Arabia. We want to cooperate with China in a very positive way."

"China is a good friend of us and is welcome to the Arab world, particularly to my country," said the ambassador. "China and Arabic countries share many issues, such as history, wisdom and civilization, and China's existence is very important for the Arab region."

He anticipated the summit would discuss topics such as peace and stability in the Arabic region and China-proposed Belt and Road Initiative (BRI). "BRI is a part of our strategy of cooperation with China, in terms of trade, infrastructure, transportation, culture, technology, health, and tourism."

"We are one of China's most important partners in the Middle East. Both China and Saudi Arabia have investments in the Arabic region. The two countries are on the right directions to promote BRI, and have many BRI projects in Saudi Arabia, including energy, electricity, and medical supplies, going on in Saudi Arabia."

Almadi asserted that although he is not sure whether China and Arabic countries would sign any agreements through the summit, "we will definitely see a closer China-Arab friendship." 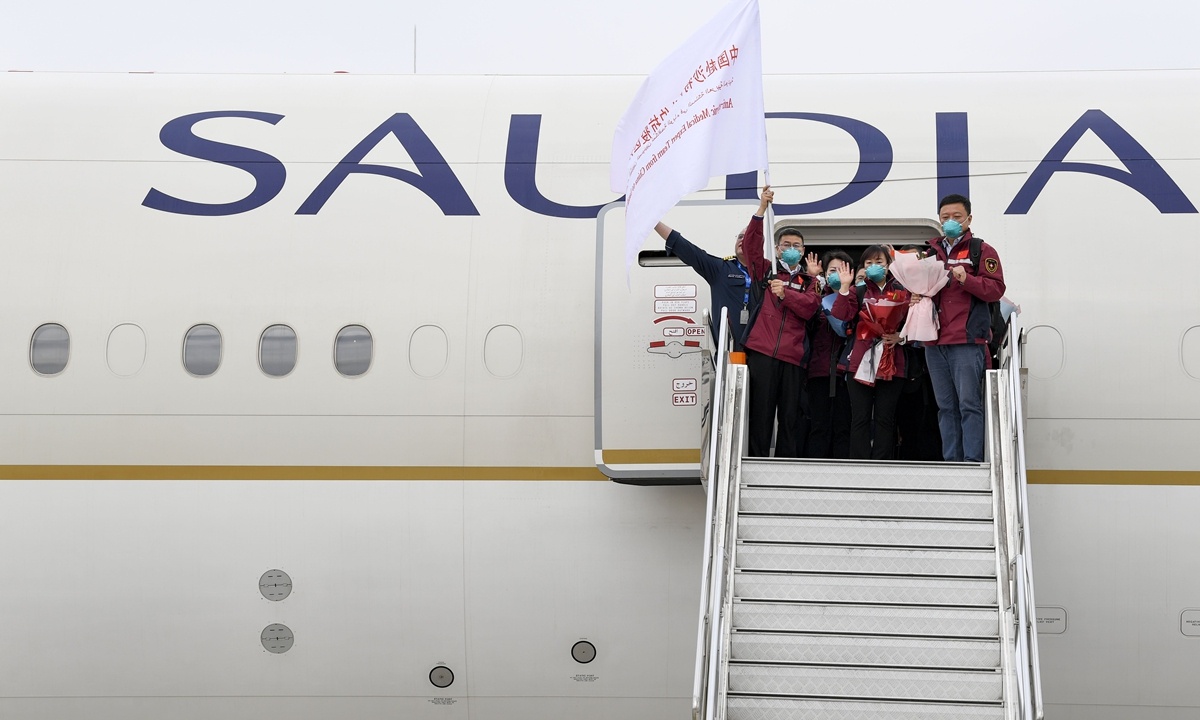 Members of a Chinese medical team board the plane to Saudi Arabia from Yinchuan, capital of Northwest China's Ningxia Hui Autonomous Region, on April 15 with medical supplies to assist in the fight against COVID-19. (Photo: Xinhua)

Fight together against COVID-19

Saudi Arabia reported 1,968 new cases of coronavirus, bringing the total number of infected people to 266,941 as of Monday.

The envoy said the situation in Saudi Arabia is under control. He stressed that the country is taking mandatory measures to ask people to wear masks in public and follow rules of social distancing.

A Chinese medical team brought medical supplies, including masks, protective suits, nucleic acid testing kits and infrared thermometers, to Saudi Arabia as early as in April in combating the COVID-19 pandemic. Wang Yi said on July 4 in a phone conversation with Saudi foreign minister that China is willing to cooperate with the Saudi side to develop a vaccine against the virus.

"China is the most important member in the international community who participates and help in this regard. China's help in fighting against coronavirus is necessary to us and we highly appreciate it," Almadi said.

He noted that China and Saudi Arabia have a comprehensive and strategic relationship and are already close enough no matter before or after the pandemic.

"Our ties will not be affected by COVID-19 at all. It will be as good as always," he noted.