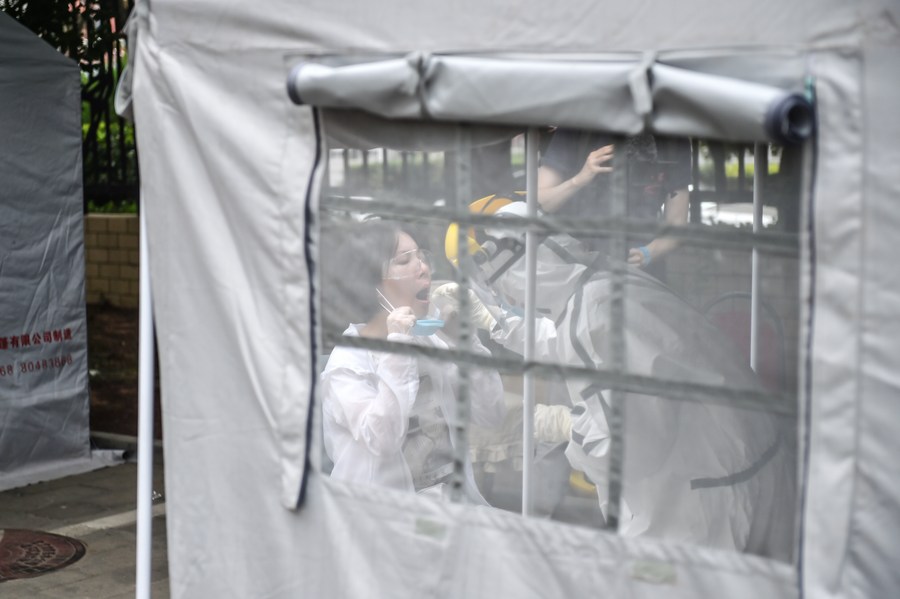 A medical worker collects throat swab of a resident at a sampling site in Dongcheng District of Beijing, capital of China, June 15, 2020. (Photo: Xinhua)

GENEVA, June 16 (Xinhua) -- The World Health Organization (WHO) said on Monday that given the recent resurgence of the coronavirus cases in Beijing, the organization is collaborating closely with China to control the COVID-19 pandemic.

The WHO is working "very closely with authorities in China to understand what exactly the risks are here and will issue any guidance internationally accordingly," Michael Ryan, executive director of the WHO Health Emergencies Program said on Monday in a press conference in Geneva.

"Beijing is a large city and a very dynamic and connected city, so there's always a concern and I think you can see that level of concern in the response of the Chinese authorities," Ryan said, emphasizing an "immediate response" and a "comprehensive set of measures" Beijing has taken.

"We are tracking that very closely," he said, adding that the WHO has office in Beijing, with "a number of epidemiologists permanently embedded" who "work on a day-to-day basis" with colleagues in China.

"We have offered further assistance and further support as it is needed, and we may be supplementing our country office team with more expertise, and in the coming days as the investigation develops," Ryan said, adding that direct cooperation again with colleagues at the Chinese Center for Disease Control and Prevention "will be important to understand the origin and spread of this disease."

Beijing has strengthened community-level disease prevention and control in response to the resurgence of domestically transmitted coronavirus cases.

"This disease is primarily spread from human to human by the respiratory routes and the contamination by humans of that environment," Ryan said, adding that "this disease can breach the animal human species barrier."

"Clearly there have been much research done on the potential for coronaviruses and other viruses to survive on many surfaces including packaging," he said, adding that he is currently "reticent to be in a position where all packaging and other things would need to be systematically tested."

"We need to understand what has actually happened in this circumstance before issuing major policies on this," he said, noting that governments, based on the information they have, could "issue whatever testing requirements are needed for the safety of citizens."

Maria Van Kerkhove, technical lead of the WHO Health Emergencies Programme, said in some respects, any country can be the next epicenter and that all countries should be ready to cope with a possible resurgence.

"It's very important that countries have the systems in place to be able to quickly identify any suspect cases, and test those cases, and follow the same pattern of events that need to happen ... so that any resurgence can be picked up quickly, and can be stamped out," she said.