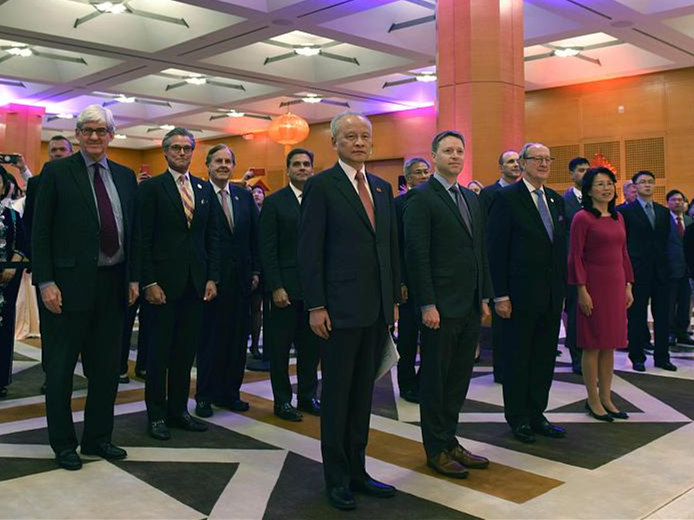 WASHINGTON, Sept. 27 (Xinhua) - Chinese ambassador to the United States on Thursday called on Washington to make right decision to put bilateral relations with China back on the right track.

Speaking at a reception here to celebrate the 69th anniversary of the founding of the People's Republic of China, Chinese Ambassador Cui Tiankai noted that China and the United States, the world's two largest economies, must make a historic choice on where they want to steer the relationship, at a time when the world is undergoing unprecedented change.

"At stake are the interests of our workers, farmers, entrepreneurs, men and women in military services and all other sectors, especially the future and fate of the young generation of the two countries," the ambassador said.

Cui said China has already made its choice, vowing a commitment to the principle of no-conflict, no-confrontation, mutual respect and win-win cooperation with the United States.

Beijing is also committed to settling differences in a constructive way, and to a sound, steady and growing China-US relationship for the benefit of the people of both countries and the whole world, the Chinese envoy said.

"We call on and expect the US side to make the same right choice," said Cui.

Noting that 2019 marks the 40th anniversary of China-US diplomatic relations, Cui said that the two countries have witnessed dramatic changes across the world and China-US relations have also evolved profoundly over the past four decades.

"History has proven that cooperation benefits both countries while confrontation hurts both, and that the only right choice for us is cooperation," the veteran diplomat added.

Addressing the audience at the reception, Matthew Pottinger, White House National Security Council senior director for Asian affairs, acknowledged China's achievements and great potential in the future, adding that there is nothing to be afraid of when Washington and Beijing are found competing with each other.

US President Donald Trump has proposed to form a constructive and result-oriented US-China relationship, which will bring unprecedented opportunity for the cooperation of the two countries, Pottinger added.

About 600 people, including US government officials, representatives from the intellectual and industrial sectors, as well as diplomats from foreign embassies, attended the reception on Thursday evening.