WASHINGTON, Oct. 5 (Xinhua) -- Chinese Ambassador to the Unites States Cui Tiankai has outlined China's stances on a slew of issues of mutual concerns with the United States, including bilateral ties, trade disputes and the South China Sea. 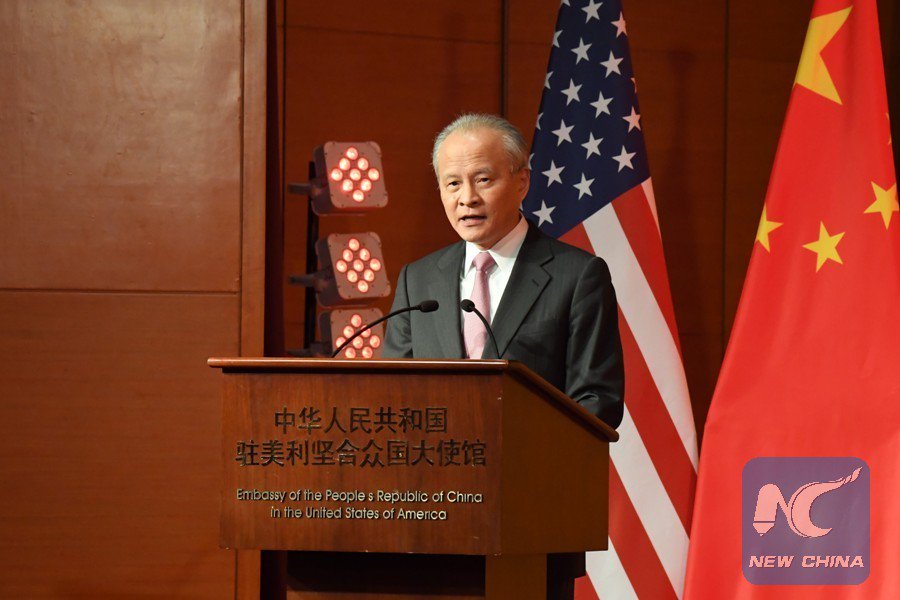 According to an interview transcript released on Wednesday by NPR, a US news outlet, Cui said "we certainly don't want to have a trade war with the United States or with any other country."

Noting that "we want to solve it through negotiation and consultation between the two sides," Cui said that "in order for the negotiation, the consultation to succeed, we do need good will and good faith from both sides."

Washington has not extended sufficient good faith in this regard, Cui explained that "the US position keeps changing all the time so we don't know exactly what the US would want as priorities."

"In the last few months there have been contacts between the two governments......I think more than once we had some tentative agreement between the two working teams. Then just overnight the tentative agreement was rejected and the demand from US changed. So this is very confusing, and this is making things very difficult," he noted. "We would like to have somebody to tell us the real story ... I think that we still need more good faith."

Commenting on the cooperation between Beijing and Washington, Cui said "I think between any two countries, maybe especially between China and the United States, there is a certain degree of competition. This is only natural. But there's also a much larger need for cooperation. This is also the reality in today's world."

"Our two countries, together with other countries, are faced with so many common challenges, the so-called global challenges or global issues, and no country can really handle all these things all by itself," he said. "We have to cooperate whether we like it or not. This is a growing mutual need and a common interest."

When asked to comment on recent reports that Washington has considered proposals to ban Chinese students from studying in US universities, Cui said that "if this is true, I think that this is a very dangerous situation."

"I could give you a very specific example. You see in the state of Indiana, there's a children's museum ... a few years ago the museum hosted a big, big event on Chinese culture ... it was a great success. And I was invited to address the opening ceremony and I had a meeting with then-Gov. Mike Pence. Gov. Pence was a great supporter to such people-to-people intercultural exchanges," he said.

"It's certainly a benefit to both, people of both countries. And the local people, they were so enthusiastic about such cultural events," Cui said. "So why should we cut off all these ties, all these natural ties between the two peoples?"

He added that "we are open to American students, professors, journalists or scholars."

"But we are also aware there are some territorial disputes. And now we're ready to work with other countries to have negotiations to have a final solution to such disputes. We understand this will take a long time," he said. "But in the meantime, it is our intention to maintain stability there. That's why we are working on a code of conduct with the ASEAN countries."

"We're making good progress in this regard ... It means before we are able to solve the territorial disputes, we should work together to maintain stability, to try to engage in some joint development of resources there, to keep a good order in the region," he said.

"So I just hope that the United States will join our efforts, will be helpful, not try to disrupt the process towards peaceful negotiations," Cui added.