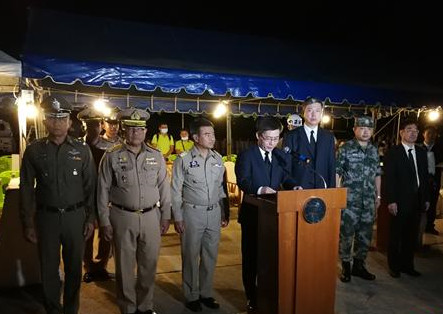 Chinese Ambassador to Thailand Lyu Jian speaks at a ceremony for the remains of Chinese nationals killed at a boat accident in Phuket on Sunday. (Photo: CRI)

Bangkok (People's Daily) - On Sunday, the Chinese Ambassador to Thailand Lyu Jian received the remains of the last victim recovered from the Phuket boat accident at the Phuket Deep Sea Port, Thailand.

Lyu, along with Bangkok embassy officials, attended an event at the port. Accompanied by Thai government officials, Lyu expressed his sincere gratitude to the Chinese and Thai employees and international volunteers who offered assistance during the accident.

Lyu said China and Thailand paid great attention to the accident and followed clear instructions while searching for the missing, treating the wounded, and dealing with the aftermath.

During the event Lyu highlighted two points. First, within 11 days, all remains of the victims in the tragedy were found. In the process, China and Thailand, along with volunteers from other countries, coordinated and conducted rescue and recovery work in a timely manner in face of unimaginable difficulties that included severe weather conditions.

Second, the treatment of the wounded and rehabilitation work was carried out in an orderly manner and went smoothly. The Chinese Embassy in Bangkok, along with the Chinese government joint working group and relevant local authorities, offered efficient services, including opening a 24-hour green passage and organizing volunteers to comfort involved families

Except for three, all of the remaining 134 family members returned to China. Insurance claims and pensions were completed in Thailand.

Lyu also appealed to the relevant parties in Thailand to speed up the accident investigation, thus producing an objective, fair and persuasive investigative report as soon as possible, to punish the people responsible for the accident and comfort the families of the victims.

With the strengthening of cooperation between China and Thailand, this accident should be treated with urgency towards the field of tourism security, so that the safety of Chinese tourists to Thailand can be effectively guaranteed, Lyu added.

The Phuket Governor Norraphat Plodthong showed his sincere gratitude to the Chinese side for its strong support during the accident.