WORLD Chinese Ambassador to Nepal: Work hand in hand to win the battle against COVID-19

Chinese Ambassador to Nepal: Work hand in hand to win the battle against COVID-19 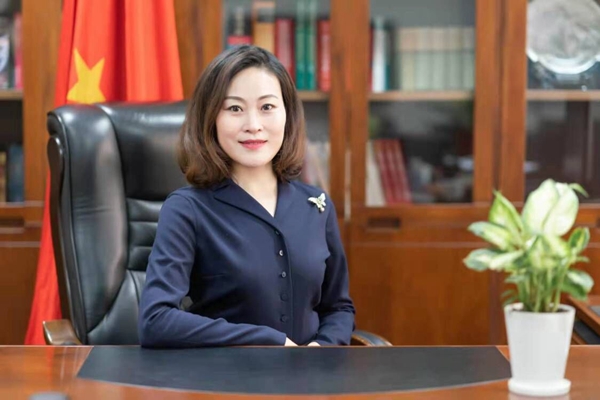 Hou Yanqi, the Chinese ambassador to Nepal, called on all countries across the globe to work together in the fight against the COVID-19 pandemic during a recent email interview with China.org.cn.

"Human beings are living in one global village and a community with a shared future," Hou said, stressing that all countries should "prioritize the safety of people's lives and health" and "work hand in hand" to win this battle.

The challenge of combatting the ongoing COVID-19 pandemic and its implications for the international community remain daunting, as the virus spreads rapidly around the world.

As of April 7, more than 1.4 million confirmed cases have been reported in 184 countries and regions worldwide, along with over 82,000 deaths, according to data from the Center for Systems Science and Engineering at Johns Hopkins University.

Against this backdrop, Hou explained that the Chinese government has managed to provide surgical and N95 masks, personal protective equipment, nucleic acid testing kits and other assistance to more than 120 countries and a number of international organizations.

Moreover, China has also been assisting many countries with their commercial procurement in China, and sharing its prevention and control experiences with the world, Hou said.

Since the outbreak of COVID-19 in China, Nepal has provided concrete support to China in its fight against the virus, including donating 100,000 surgical masks, which is a testament to the traditional friendship between the two countries.

"The international community, including Nepal, gave us valuable support and assistance during the most difficult period of China's fight against COVID-19. The Chinese nation is grateful and always reciprocates other's kindness," Hou said, adding that the Chinese people will never forget such goodwill.

"Since the epidemic spread to Nepal, China has been doing its utmost to provide help to the country," she said.

Hou mentioned that the Chinese Embassy in Nepal has formed a joint working group with relevant ministries in Nepal, and shared information and experiences in such areas as epidemic prevention and control, clinical treatment, and customs quarantine, by providing documents and conducting video calls.

Going forward, she emphasized that China will provide material assistance to Nepal, with both sides already in communication about how to do so. Meanwhile, some local governments and civil societies in China have been actively raising much-needed materials for Nepal.

However, Hou expressed concerns about the transportation of donated supplies. "The Chinese Embassy will continue to strengthen communication and coordination with all parties to ensure the smooth clearance of customs and transportation," she said.

China will continue to utilize video conferences with experts and other means to strengthen experience and technical exchanges, and to carry out joint prevention and control measures to help Nepal fight the outbreak, she said. 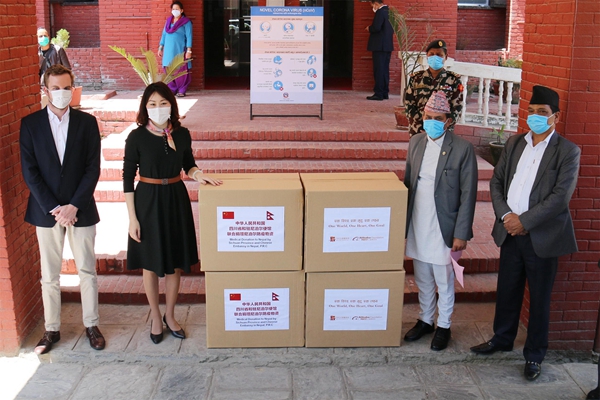 As of April 7, nine confirmed cases of COVID-19 have been reported in Nepal, with no deaths, according to data from Johns Hopkins University.

Hou pointed out that the general situation regarding epidemic prevention and control in Nepal is currently stable, however, the country is still facing challenges brought about by the global pandemic.

In response to such a health emergency, the Nepali government has taken a series of measures including providing up-to-date information on the epidemic, continuously improving its laboratory testing capacity, establishing a nationwide network of designated hospitals, as well as tracing those who have been in contact with confirmed patients and asking them to self-isolate.

Moreover, Nepal has conducted a nationwide lockdown in order to minimize the movement of people at home and from abroad. The country has also made extensive efforts to ensure the supply of daily essentials and provide relief packages to those in need.

"These measures have played a vitally important role in containing the epidemic," Hou said, adding that China understands and supports the Nepali government in taking action based on its own national conditions to contain the epidemic and protect its people's lives.

All countries in South Asia have now reported cases of COVID-19, with a total of more than 9,000 confirmed as of April 7, according to data from Johns Hopkins University.

China, which neighbors South Asia and provides mutual assistance and solidarity to the region, and has observer status in the South Asian Association for Regional Cooperation (SAARC), has continued to uphold the vision of a community with a shared future for mankind. It is also cooperating closely and sharing information on prevention and control with SAARC countries, Hou said.

Since the outbreak of the epidemic, "China has provided assistance to most South Asian countries, to the best of our abilities," she said.

As the pandemic continues to spread, South Asia, with its large population, is under huge pressure and all countries in the region have adopted strict prevention and control measures.

Given such circumstances, "China will continue to make full use of various resources and channels to stay in close cooperation with all member countries and the secretariat of the SAARC," explained Hou.

"We could jointly build a network of control and treatment at the regional level to enable a quicker response to public health emergencies and safeguard regional public health security," she said.

The bilateral practical cooperation between China and Nepal has been affected due to the COVID-19 pandemic.

Regarding this aspect, Hou pointed out that after the pandemic is contained, the two countries will continue to strengthen mutual cooperation in terms of infrastructure construction and areas regarding people's livelihoods.

"The pandemic has reminded us that the two countries should carry out more cooperation in terms of medical and health care, as well as e-commerce and logistics," Hou said.

"China and Nepal are long-term partners, and our bilateral cooperation and China's support and assistance for Nepal will never affected by any temporary incident," she concluded.