Washington (People's Daily) - Cui Tiankai, Chinese Ambassador to US, took a live interview on Thursday with CNN anchor Christiane Amanpour on China-US high-level strategic dialogue, China-US relations, Xinjiang-related issues and more. The interview was broadcast live on CNN and then on PBS on the evening of the same day.

Cui criticized CNN and other Western media for reporting on Xinjiang with deep prejudice and prejudice. Cui reiterated that our future lies in the joint efforts to build such a global community, not to divide the world into different camps. 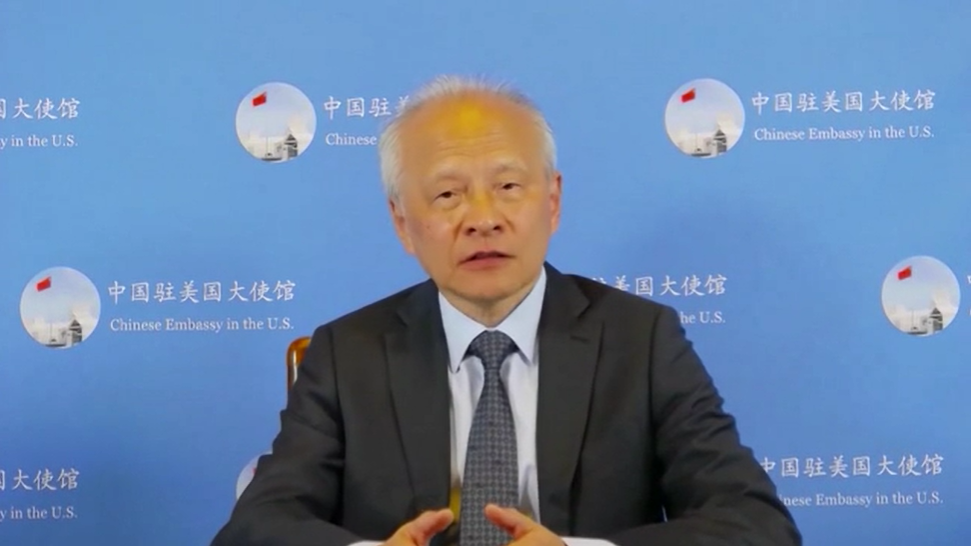 Ambassador Cui (Photo: Embassy of China in the US)

In terms of Sino-US relations, Cui said that the meeting in Anchorage was a timely one, and helpful. It certainly helped both sides to have a better understanding of the other. He hopes this will be the beginning of a long process of dialogue, communication and hopefully coordination between the two sides.

Cui said that China's development goal is to meet the growing aspirations of the Chinese people for a better life. “Our goal is not to compete with or replace any other country. This is never our national strategy. Hopefully, people could have a better understanding of this,” said the ambassador.

“We are certainly living in a very different and fast changing world…what today's world wants and what tomorrow's world would want is joint efforts by all countries to build a community of nations for a shared future…We believe our future lies in the joint efforts to build such a global community, not to divide the world into different camps ,” said Cui.

On Xinjiang-related issues, Cui pointed out there has been so much fabrication so far. It's immoral to take advantage of any particular family situation and manipulate it. “This is not true journalism. It's very unfortunate for CNN.” Cui reiterated that some people, including some journalists, start with very strong bias and prejudice. That's their problem. That's how they come to very different conclusions about the particular situation, very much against real facts.

Cui described the basic facts about Xinjiang. Cui has been to Xinjiang more than once in recent years. Until very recently, the big threat to Xinjiang, to people of all ethnic groups was terrorist attacks, thousands of them hurting and killing thousands of innocent people, people from all ethnic groups. It was a very serious threat. There was strong demand from the local people that the government had to do something to stop it.

“We did not use missiles or drones. We stepped up efforts for education and training, helping people to learn more about the law, to acquire good skills to improve their lives, find good jobs. All this has made a huge difference. There has been no single terrorist attack in the last few years. In terms of the population, the Uygur population has more than doubled in the last four decades. So how can people talk about the so-called genocide? ” said Cui.

Cui said that in the last few years, there have been more than 1,000 people, diplomats, journalists, from over 100 countries, many of them Muslim countries who have visited Xinjiang. What they have seen are real facts. “And also you're talking about media coverage, satellite pictures. I remember all these things happened over the years, for instance, in maybe more than a dozen years ago in Iraq, a few years in Syria, in Libya. I still remember you reporting the Iraq War some years ago. So, can people come out and repeat these same stories to the world? No. Because many of the stories were just based on falsehood, were just fabrication.”

In the interview, Ambassador Cui also paid attention to the discrimination against Asians in the US. “We take a very firm and strong position against such crimes. We're very concerned, very shocked by the hate crimes against Asians in the United States. We just hope the US government will do everything possible to protect these Asian people. Many of them are American citizens. They should enjoy the same rights as other American citizens. Hopefully, there will be serious efforts to confront such discrimination.”