WORLD Chinese ambassador urges US to stop its words, actions that escalate the tension on Taiwan issue

Chinese ambassador urges US to stop its words, actions that escalate the tension on Taiwan issue

Washington (People's Daily) - Qin Gang, Chinese Ambassador to US, took an interview in Washington DC on Tuesday from mainstream US media including Reuters, the Associated Press, Bloomberg, National Public Radio, the Washington Post, the Wall Street Journal, the New Yorker, the Hill, Politico, Axios and Defense One where he answered questions on US-China relations, the Taiwan question, Hong Kong and China's diplomacy. On the Taiwan question, Qin urged the US to stop pointing fingers at China and stop words and actions that escalated the tension. The ambassador's opening remarks were as follows: 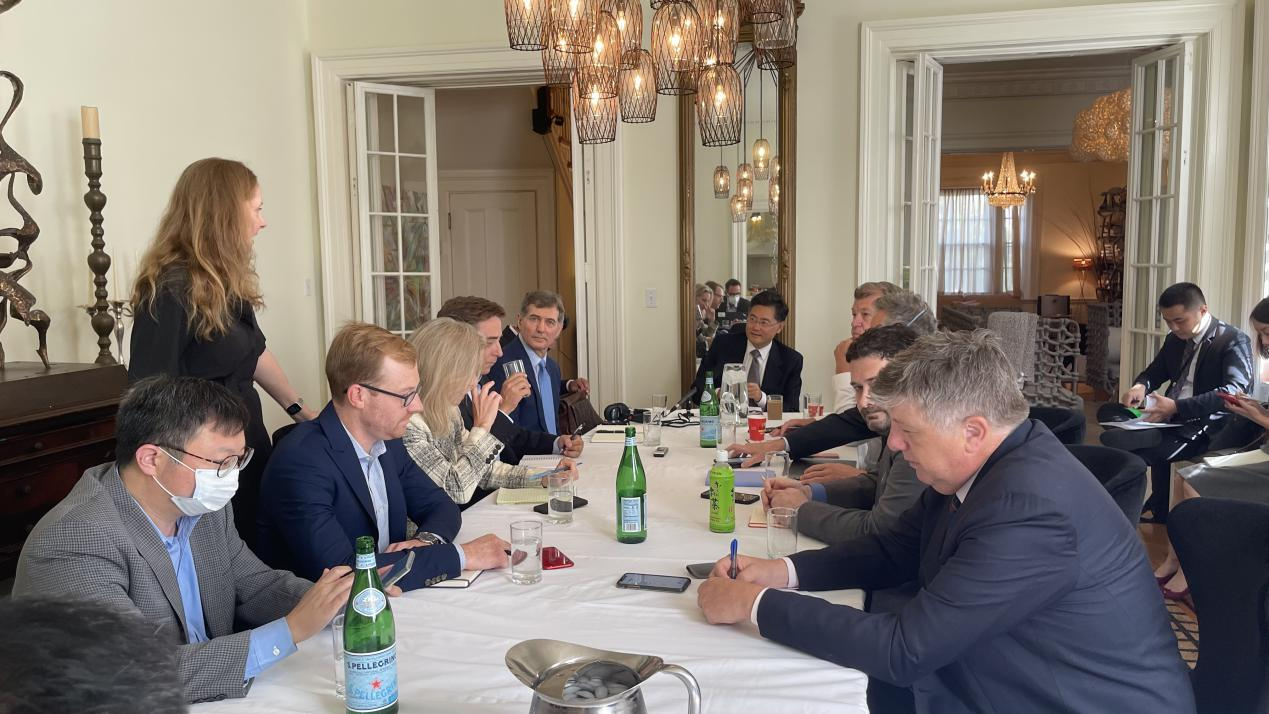 I’m sure you are here because you are very interested in one question. US House Speaker Nancy Pelosi visited China’s Taiwan Region despite China’s firm opposition and repeated representations. She went there with the connivance and arrangement of the US government. This has seriously violated the one-China principle, gravely infringed on China’s sovereignty, greatly interfered in China’s internal affairs, seriously violated the commitments made by the US, and severely undermined peace and stability across the Taiwan Strait. Facts have proved that this is an out-and-out political provocation and farce. China strongly condemns and firmly objects to it. We have fully expressed our position and taken countermeasures in response to it. However, some Americans do not recognize and correct their mistakes, but choose to confound black with white and reverse the narrative. So I feel it necessary to put things clearer here.

The US claims that China is escalating the situation, China is overreacting, and China is using Pelosi’s visit as a pretext to establish a “new normal”. But a basic fact is, the US side took the first step to provoke China on the Taiwan question. This has openly infringed on China’s sovereignty and territorial integrity. China had made the utmost efforts to prevent this crisis from being imposed on China. We had expressed firm opposition at various levels and through various channels. We had warned that if Pelosi made the visit, there would be very serious consequences. China would firmly and forcefully respond. To our regret, the United States chose not to listen.

China’s position is legitimate, reasonable and lawful. China’s measures are firm, forceful and proportionate. China’s military exercises are open, transparent and professional. They are in line with China’s domestic laws, international law and international practices. It’s natural, legitimate and lawful for China to defend its territorial integrity and resist division of its territory. We don’t need any excuse for that! The US should not feel surprised about this. If we needed an excuse, why had we worked so hard to prevent it from happening in the first place?

The US claims that China’s pursuit of reunification is a “threat” to Taiwan, and the Mainland is changing the “status quo”. But a basic fact is, Taiwan is an inseparable part of Chinese territory. The Taiwan question is China’s internal affair. The “status quo” of the Taiwan question is, there is only one China in the world. Both sides of the Taiwan Strait belong to one and the same China. Though the two sides have not been reunified, China’s sovereignty and territorial integrity have never been separated. The fact that the Mainland and Taiwan belong to one and the same China has never changed. Taiwan has never been a country. That Taiwan is part of China has been laid out in China’s constitution and other laws. The Cairo Declaration states that all territories Japan stole from the Chinese shall be restored to China. The Potsdam Proclamation reaffirmed that the terms of the Cairo Declaration would be carried out. UNGA Resolution 2758, passed in 1971, has resolved the issue of representation of the whole of China, including Taiwan, at the UN in political, legal and procedural terms once and for all.

Then who is changing the “status quo”? Not China, but “Taiwan independence” separatist forces and the US themselves. Tsai Ing-wen authorities are highly deceptive and misleading. They pursue “Taiwan independence” in an incremental way, with the help of the US. They reject the “1992 consensus”, and try to remove their Chinese identity. On the other hand, the US uses Taiwan to contain China. It keeps distorting, fudging and hollowing out the one-China principle. It put into its one-China policy some unilateral stuff, including the Taiwan Relations Act and the Six Assurances. It has put some unilateral stuff, such as Taiwan Relations Act, Six Assurances to Taiwan, into the one-China policy, which China has firmly objected to from the very beginning. It has also stepped up official interaction with Taiwan, sold arms to Taiwan many times, and even claimed “militarily defending” Taiwan. These acts have been emboldening “Taiwan independence” separatist forces.

The people of any country would hold the reunification, sovereignty and territorial integrity of their country dear to their hearts. These are also the most basic thing they would expect. The oath of allegiance of the US reads, “one nation under God, indivisible”. Then could China be divided? Would the 1.4 billion Chinese people accept that?

The one-China principle is the political foundation of China-US relations. It’s at the core of the three Sino-US joint communiques, and the premise and foundation for China and the US to establish and develop diplomatic relations. President Biden has said for many times, there is no change in America’s one-China policy, and the US does not support “Taiwan independence”. We expect the US to honor this commitment.

We are handling the serious fallout from Pelosi’s visit. I hope the US would draw lessons from it, earnestly abide by the one-China principle and the three Sino-US joint communiques, and not underestimate the strong resolve, determination and capability of the Chinese government and people to defend national sovereignty and territorial integrity. I hope the US would stop pointing fingers at China, stop its words and actions that escalate the tension, stop using Taiwan to contain China, and not allow “Taiwan independence” separatist forces to go further down the dangerous path.