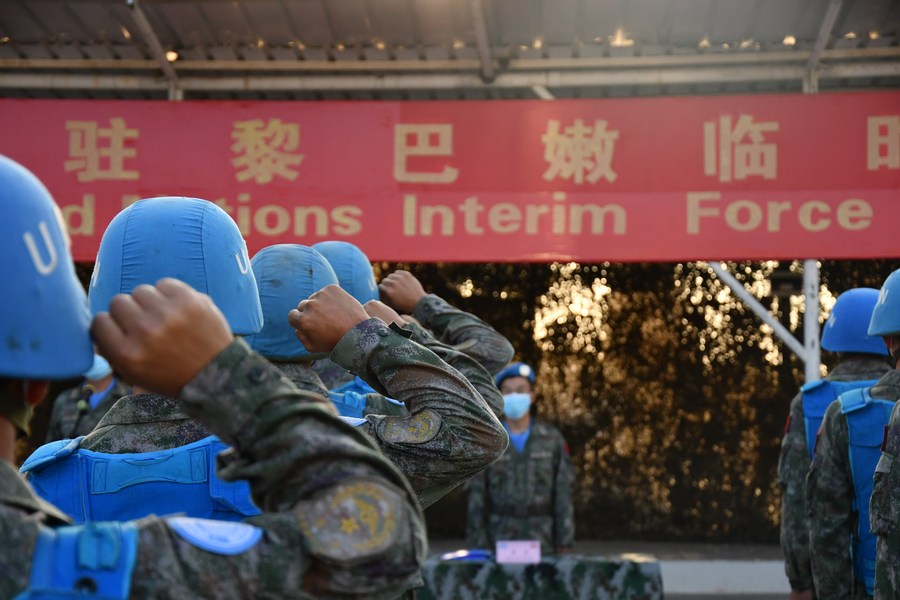 Chinese peacekeepers in Lebanon take an oath before heading to Beirut at the Chinese troops' camp in Hanniyah village in southern Lebanon, on Sept 26, 2020. (File photo: Xinhua)

BEIRUT, Oct. 2 (Xinhua) -- Jia Fei, soldier from 19th batch of Chinese peacekeeping forces to Lebanon, has not spent China's traditional Mid-Autumn Festival with his parents for nine years during his military service.

This year, Jia is farther away from his parents as it is the first time for him to go abroad for the peacekeeping mission as a guard squad leader.

"My son has been 14 months and 23 days. I only spent some time with him when he was born," said the man from east China's Shandong Province, as he fought back tears, adding that he really missed his son and wife.

The Mid-Autumn Festival overlaps with the National Day this year, which both fall on Oct. 1. However, Chinese peacekeepers are far away from their motherland and family members, performing the peacekeeping mission in a foreign country with danger risk.

"Dear, we are about to see our new baby. I am so excited but also sorry for my absence. Thanks for your contributions to our family," said Mao Pan in a phone conversation with his wife as he prepared to go to the minefield near the Blue Line, a border demarcation drawn in 2000 by the United Nations after Israel withdrew its forces from southern Lebanon.

Mao arrived in Lebanon in August as a mine-sweeping soldier for Chinese peacekeeping forces while his wife's expected delivery date is in October.

Cao Yijie, a mechanical operator who has been a new father, chatted with his wife in an online video call, staring at his 3-day-old daughter with a big smile.

"Although it is a pity that I cannot wait for the birth of my daughter, I should earnestly complete the peacekeeping mission and make my daughter proud of having a father who is a peacekeeping warrior," said Cao.

Chinese peacekeepers have improved the prevention and control of the COVID-19 pandemic as the UN Interim Force in Lebanon recently notified that officers and soldiers from several troop-contributing countries have contracted the virus.

Zhang He, the head nurse of the hospital of Chinese peacekeeping forces, has been busy at the pre-inspection and triage post all day long in sweat-soaked isolation gown.

"For everyone's safety, no matter how hard and tired I am, I have to make sure that there is no problem at the 'first checkpoint' of the prevention and control of the pandemic in the hospital," she told Xinhua.

Wang Jianbin, a doctor with experience in fighting against the coronavirus, disinfects the camp of the Chinese peacekeepers to Lebanon three times a day in a protective gear and with a load burden of 16 kg under the scorching sun.

It took half a day to finish the disinfection work but Wang refused other colleagues' help, saying that "the pandemic is severe and I have more experience. I should do this job alone."

The Chinese peacekeeping forces to Lebanon also organized evening parties and cultural activities in the camp to celebrate the National Day and the Mid-Autumn Festival.

Chef Li Jiesheng spent a week preparing hand-made mooncakes for peacekeepers with the taste of the hometown.

"I am here for the peacekeeping mission," the loud voices of the Chinese peacekeepers resounded through the camp, expressing their commitment to the mission to defend peace and stability.