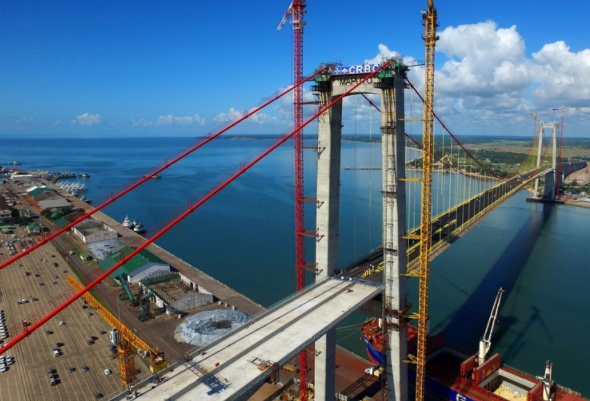 MAPUTO, Nov. 11 (Xinhua) -- Idelcia Mapure, a Mozambican architect in the southern African nation's capital Maputo, says the newly-inaugurated Maputo Bay Bridge will be the city's "postcard" that will identify itself on the African continent and around the world.

"Cities all around the world have their references, and the bridge will be Maputo's postcard because this bridge improves the landscape of Maputo," according to Mapure.

The longest twin-tower suspension bridge in Africa, which hovers across the Maputo Bay with a main span of 680 meters, was officially open to traffic on Saturday.

The bridge is part of the Maputo Bridge and Link Roads project built by the China Road and Bridge Corporation, with Chinese standards and financing support.

Speaking at the inauguration, President of Mozambique Filipe Jacinto Nyusi said that the project will greatly facilitate transport and connectivity between the country with other parts of the African continent.

Mapure, an architect and planner in the National Association of Mozambique Municipalities that represents the 53 municipalities of the country, said the bridge would also add value to the outlying urban district of Katembe at the other side of the Maputo Bay.

"Katembe is part of the Maputo city, but it was always forgotten as if it wasn't Maputo. The bridge will clear that and make Katembe into one potential area that represents the extension of Maputo city," said Mapure.

Aderito Chivurre, an accountant living in Maputo, shares the same point of view regarding the importance of the bridge to the country's economy and that of Maputo city in particular.

He praised the fact that the bridge would motivate people's interest to live in Katembe, which will make the district's development faster. "Moreover, transport by road between Mozambique and South Africa will also be much efficient during peak seasons such as Christmas and Easter, among others," he said.

Joao Matlombe, councilmen for transport in the Maputo Council, said that the bridge is strategic to the capital of Mozambique as it will bring benefits in terms of mobility and it will allow the city to grow southerly against the current tendency when it grows only toward the northern region such as the Marracuene district.

"We already have an urbanization plan for Katembe and it indicates that there will be more than 400,000 families that will be living in Katembe in the coming 15 to 20 years against the current 25,000. This is an added value that cannot be doubted." said Matlombe.

Matlombe revealed earlier that travel on the bridge takes roughly minutes compared to the traditional ferry service, which sometimes could take up to one hour.

There are also reportedly plans by both private and public entities to develop the district of Katembe, among them, there are the transfer the country's Assembly of the Republic to Katembe and the construction of parliament residences for MPs.

Moreover, there are embassies that had expressed interest to build their offices in Katembe and there is also a plan for the construction of 4,000 social housing units.

Another group of people hailing the Maputo Bay Bridge is the Association of Maputo Taxi Drivers (Taxima) who say that the bridge will contribute to increased profits because Katembe is a tourism destination.

"To reach Katembe used to be difficult, but the bridge will give opportunities to any taxi driver to accompany clients to the beaches at Ponta de Ouro and others," said Micas Cuna, Executive Secretary of Taxima.

Construction of the project started in June 2014. The contract amount is 785.8 million U.S. dollars, with 95 percent of the funding provided by China through preferential and buyers' loans.

The project, according to the contractor, has generated to date 3,788 jobs for the locals and provided skills training opportunities for thousands of local employess.