A Chinese consortium on Thursday signed an agreement with Brazil's northeast state of Bahia to build Latin America's longest cable-stayed sea bridge, linking the city of Salvador and the island of Itaparica. 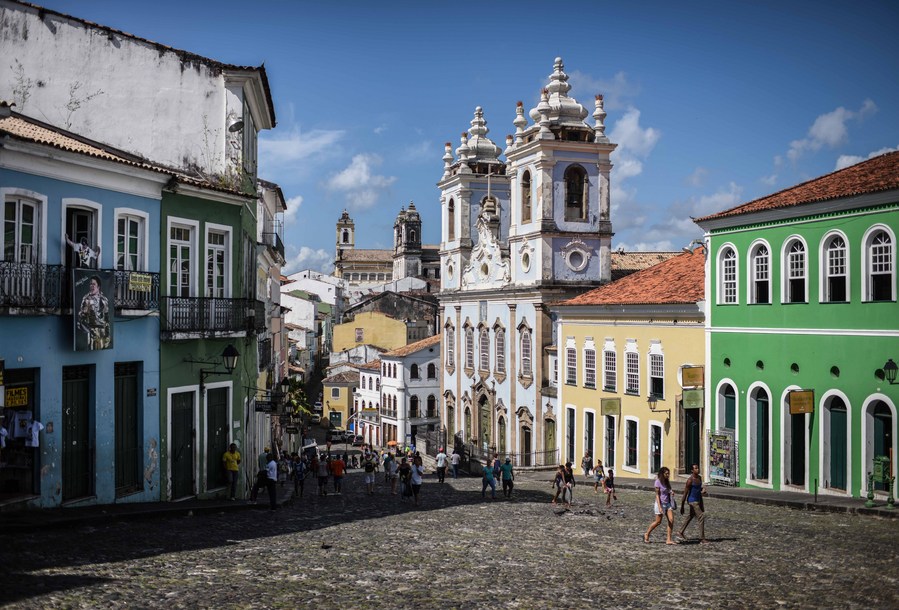 Tourists visit the old town of Salvador, in Salvador, Brazil, on Oct. 31, 2016. Salvador, the capital of the northeastern Brazilian state of Bahia, is the first colonial capital of Brazil and one of the oldest in the Americas. (Xinhua/Shen Hong)

The consortium is formed by the China Communications Construction Company (CCCC), CCCC South America Regional Company and China Railway 20 Bureau Group Corporation.
The 12.4 km-long cable-stayed sea bridge is considered key to the development of Bahia as vehicles will no longer have to go around the Bay of All Saints. It largely reduces the distance between the state capital Salvador and the south of the state by nearly an hour's drive.
The signing of the contract was scheduled for May, but was postponed till Nov. 12 due to the COVID-19 pandemic.
The companies will have one year to prepare the project and another four to execute it, generating some 7,000 jobs in the process.
"I know that a bridge between Salvador and the island of Itaparica has been the dream of the local population for many years. When it is inaugurated, this bridge will be the longest cable-stayed sea bridge in Latin America and will surely add new impetus to the economy, to employment and to the quality of life of the northeast region of Brazil," Chinese Ambassador to Brazil Yang Wanming said.
"With solidarity and cooperation, the Chinese people stand alongside the Brazilian people to face the complex challenges imposed by COVID-19. Due to its strategic location, the state of Bahia has enormous development potential and is a great promoter of China-Brazil cooperation. You can count on us in facing the health crisis and in economic recovery," Yang added.
Bahia's Secretary of Infrastructure Marcus Cavalcanti said the bridge "will be a challenge for engineering, since it will use engineering solutions that have never been used before in Brazil. Without a doubt, it will be an example so that we can train our future workforce."
CCCC Vice President Chen Zhong described the signing of the contract as "a historic moment in bilateral cooperation in logistics infrastructure."
According to Chen, the work represents "the crystallization of pragmatic cooperation between China and Brazil, which will be the work of the century of interconnection by sea."
"It will improve transport efficiency and reconfigure the region around the Bay of All Saints and the state of Bahia, by connecting the island of Itaparica to the mainland. The bridge will play a key role in the economic development of the state and in creating wealth in northeast Brazil," he added.