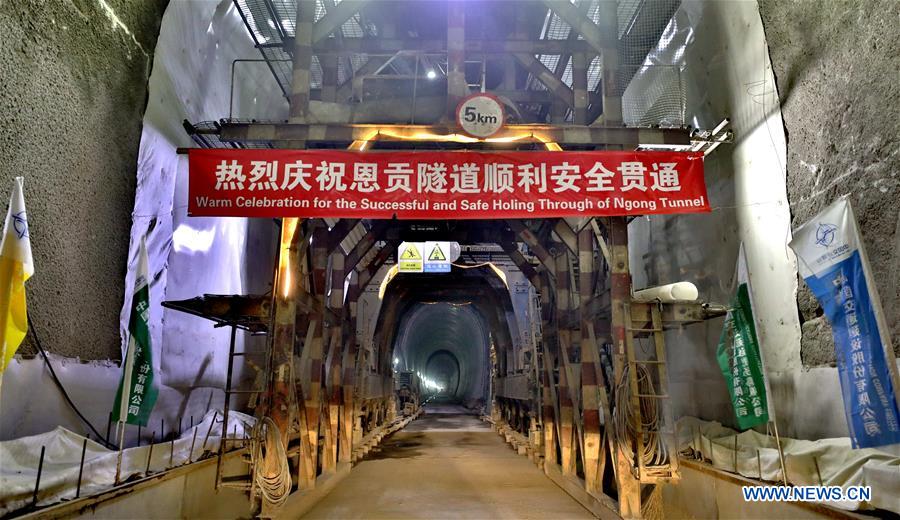 The tunnel is part of phase 2A of the Standard Gauge Railway (SGR) that runs from the Kenyan Capital city of Nairobi to Naivasha town. 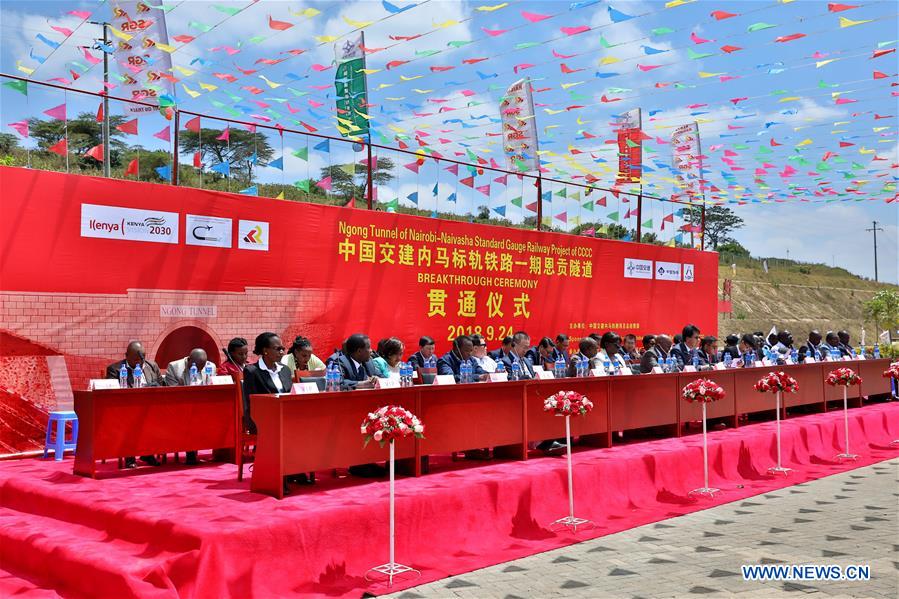 Photo taken on Sept. 24, 2018 shows a breakthrough ceremony of Ngong tunnel of the Standard Gauge Railway (SGR) in Nairobi, capital of Kenya.

"With a total length of 4.5 km, the Ngong tunnel is currently the longest tunnel in East Africa and the dominant work in SGR Phase 2A," An said during celebrations to mark the breakthrough of the Ngong tunnel. 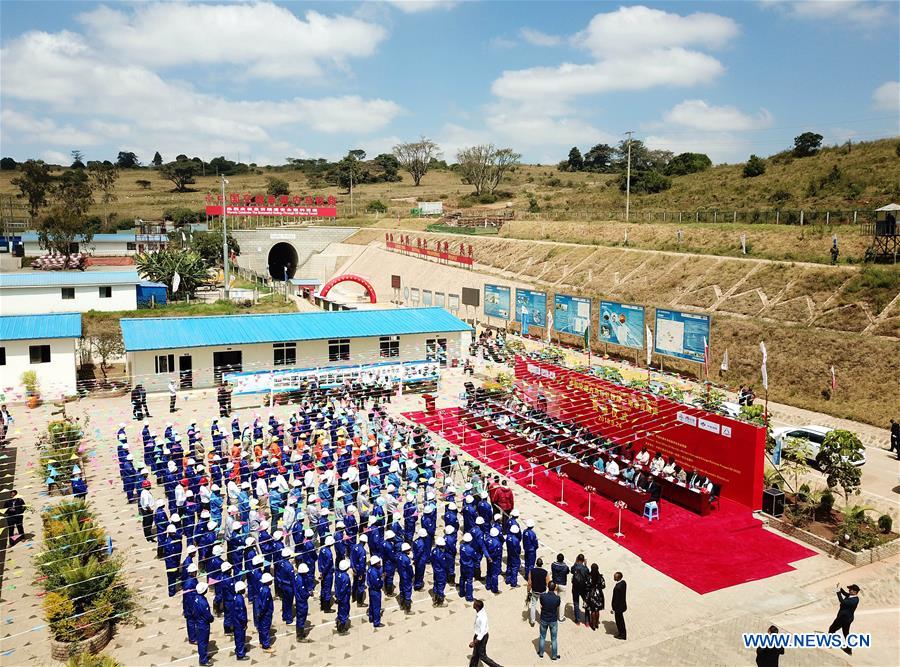 Photo taken on Sept. 24, 2018 shows the interior of the Ngong tunnel of the Standard Gauge Railway (SGR) in Nairobi, capital of Kenya.

The Phase 2A which extends for about 120 km is set to be completed in 2019. The 4.5 km Ngong tunnel has been designed as a single-track railway tunnel with a clearance height of nine meters and a width of seven meters.

CCCC engineers used the New Austrian Tunneling Method (NATM) of drilling and blasting to build the tunnel and it is the first time that such a method has been used on such a large scale in Kenya. 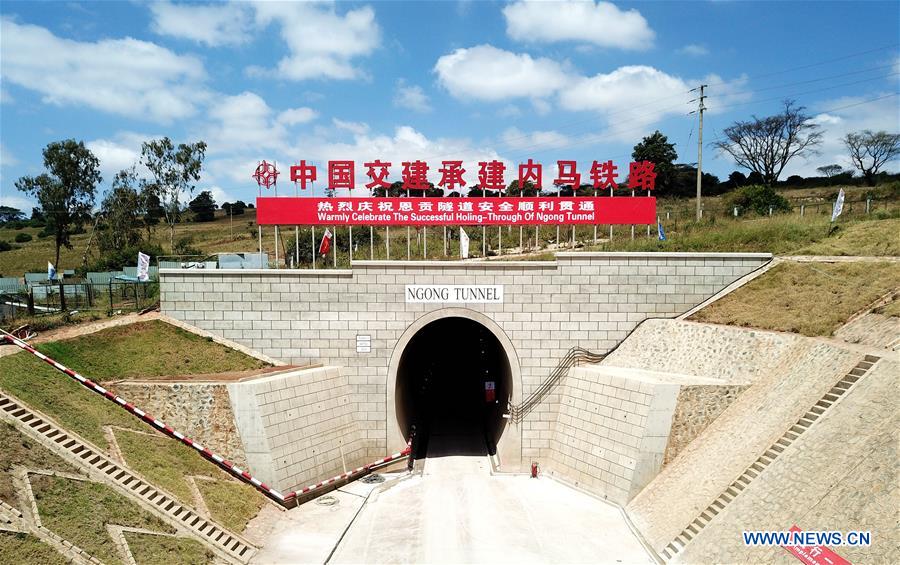 Photo taken on Sept. 24, 2018 shows the entrance of the Ngong tunnel of the Standard Gauge Railway (SGR) in Nairobi, capital of Kenya.

The tunneling method is economical, efficient and has strong adaptability for different geological and groundwater conditions. The method is preferred because it controls surface collapse effectively, and enhances the working environment during construction.

An said the construction team addressed the technical difficulty in designing and constructing in the Great Rift Valley to ensure a safe breakthrough of the tunnel and this means that the SGR Phase 2A has entered a new stage, laying a solid foundation for inauguration next year.

The general manager said that with quality as a foundation and safety as a lifeline, they shall maintain an all-round quality control system in the source, process, methodology and management, and enforce strict safety management at all procedures.

"We will continue to protect the environment, implement local contents, and participate in social welfare, bringing real benefits to the local communities," he added.

"Together with all our Kenyan partners, and building on what has been achieved at the FOCAC (Forum on China-Africa Cooperation) Summit in Beijing, we shall construct a time-honored railway that will stand the test of time and operations, achieving greater success in a new era between our two nations," he added.

According to Steve Zhao, the CCCC Kenya SGR Project Spokesperson, 146 refuge holes of different sizes have been built within the tunnel to allow maintenance workers to take cover as the train approaches.

A 533-meter wide emergency rescue channel has also been built within the tunnel, to allow for vehicle access in case of emergencies.

"We have reserved space to install fans within the tunnel. Six jet fans can be installed to ensure air ventilation once the tunnel is operational," added Zhao.

He revealed that about 600 workers and engineers worked tirelessly overcoming all odds for 24 months to accomplish the engineering marvel.

Michael Waweru, chairman of board at the Kenya Railways, said the SGR is one of the most important transformational projects for the railway and entire transport sector in the region. 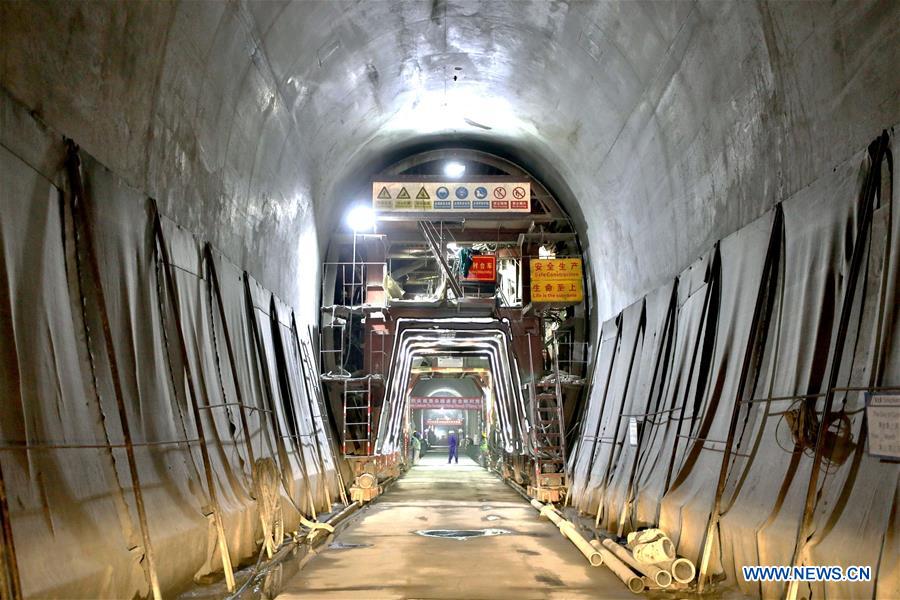 Photo taken on Sept. 24, 2018 shows the interior of the Ngong tunnel of the Standard Gauge Railway (SGR) in Nairobi, capital of Kenya.

"It is an ambitious undertaking by the government of Kenya envisioned to revolutionize the social economic development of the country," Waweru said.

The chairman said it is expected that as a result of construction of the SGR line, it will lead to an upsurge in development in the towns along the corridor, ease transportation of their resources and foster sustainable development patterns.