KATHMANDU, Sept. 27 (Xinhua) -- A special Chinese cultural show Splendid Hunan was staged in Nepal on Thursday to celebrate the 70th anniversary of the founding of the People's Republic of China (PRC). 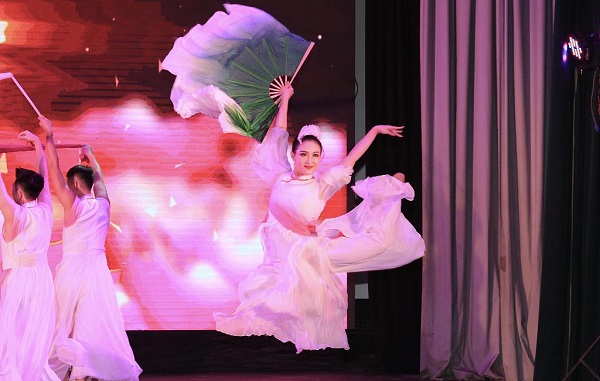 Dozens of Chinese artists gave a spectacular show of ethnic and modern dances, singing, acrobatics, puppet show and face-changing art that thrilled the audiences in the hall of the Army Club in Kathmandu.

The event, hosted by the China Cultural Center in Nepal and the Hunan Provincial Department of Culture and Tourism, was inaugurated by Secretary of the Nepali Ministry of Culture, Tourism and Civil Aviation Kedar Bahadur Adhikari and Chinese Ambassador to Nepal Hou Yanqi.

Addressing the event, the Nepali secretary appreciated China's efforts in preserving civilization and the rich art and culture. "Such events are important to strengthen people to people relations between Nepal and China."

Saying that Hunan is rich in history, innovations and cultural diversity, the Chinese ambassador hoped that the program will help the Nepali people to better understand China and its diverse culture.

The cultural show featured a dozen performances by the artists of the Hunan Province Song and Dance Theater Co., Ltd and Hunan Puppet and Shadow Art Protection and Inheritance Center.

The acrobatics entitled Ultimate Football amazed the audiences by the mind-blowing skills of two players, who also engaged with the audiences through the game.

"Among all, acrobatics is my favorite, I had never seen such amazing performance in my whole life. My eyes were wide open throughout the event," a school teacher, Samjhana Thapa, shared with Xinhua after the event.

Among others, Chinese artist Qiu Taowu's performance of a popular Nepali folk song also won the heart of the audiences. He also impressed them by his soulful singing of the song Sky Road.

Besides, the face-changing art known as Bianlian by Li Zhong won the non-stop applauses of audiences for his unique way to portray different faces.