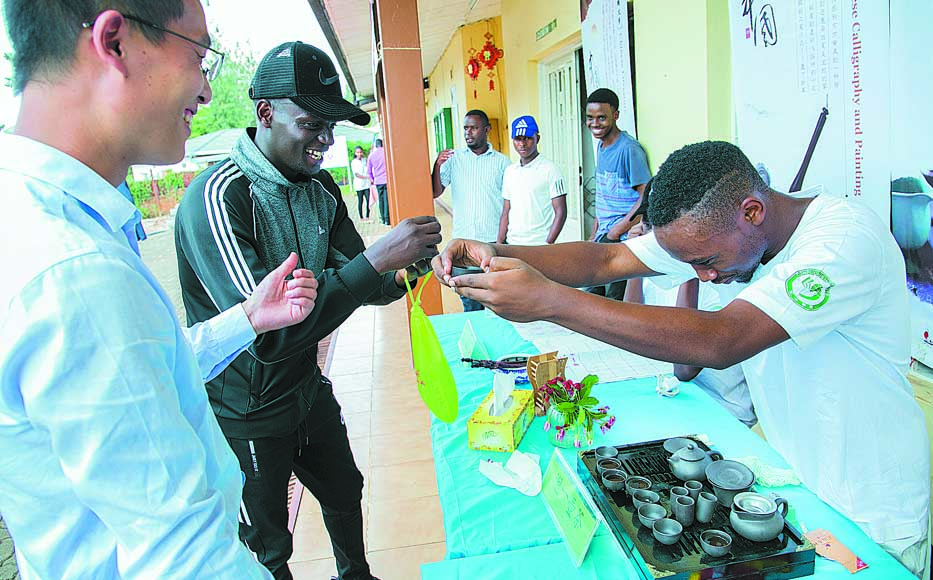 Chinese tea is served to visitors of a Chinese cultural event organized by the Confucius Institute at the University of Rwanda in Kigali, Rwanda, on Friday. （Photo：XINHUA）

KIGALI — Under the scorching sun in the Rwandan capital Kigali on Friday, a crowd mostly made up of young people braved the heat and were treated to an exciting exhibition of Chinese culture at the University of Rwanda.

The afternoon began with a rousing display of kung fu, with the performers wowing the crowd with skillful and energetic moves.

The event, organized by the Confucius Institute at the university, drew in visitors from the community as well as university and secondary school students.

Not far from the kung fu performance, a crowd gathered around a Chinese traditional costume display, one of the more popular booths.

Didacienne Mugwaneza, a third-year food science and technology student at the University of Rwanda, said Chinese costumes are "particularly beautiful". Marie Reine Nyinawabera, a crop science student, said she was impressed by the kung fu performance.

The public health student started taking Chinese language lessons in 2018, but these were interrupted by the COVID-19 pandemic.

China's Ambassador to Rwanda Wang Xuekun said during the event that Rwanda is an open and dynamic society ready to explore a foreign culture.

"Chinese culture is a treasure trove that is worth exploring, and today's event is a good chance for us all," Wang said.

"As long as the two peoples enjoy affinity, future China-Rwanda relations are sure to develop."

Citing patriotism and unity in diversity, Wang said that Chinese and Rwandan cultures are similar.

Zeng Guangyu, director of the Confucius Institute at the University of Rwanda, said language and culture sometimes move together.

"We invited the community around to participate so that they can see and touch and feel the experiences," he said. "Secondary school students, for example, taking Chinese language lessons, learn it from textbooks, but the exhibition gives them the opportunity to see the culture."