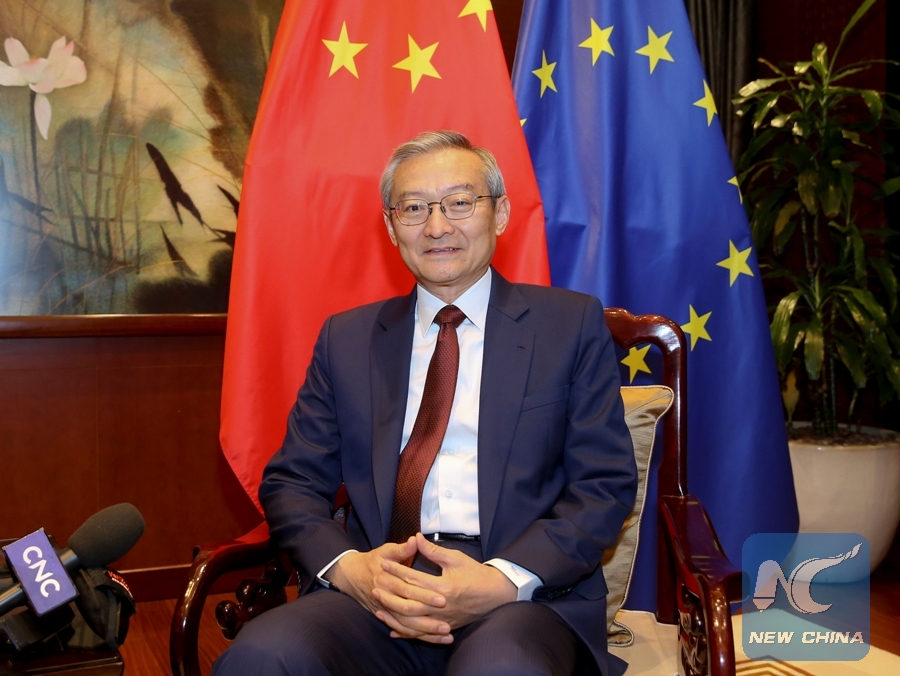 Ambassador Zhang Ming, head of the Chinese Mission to the European Union, is in an exclusive interview with Xinhua on Dec 27, 2018. (Photo: Xinhua)

China's top diplomat to the European Union on Wednesday slammed US Secretary of State Mike Pompeo for his disinformation campaign against China and Chinese telecom company Huawei.

In an op-ed published on the Politico website on Monday, Pompeo, a former CIA chief, accused Huawei of maintaining links to China's People's Liberation Army, engaging in espionage and posing a security threat, without providing any specific evidence.

Zhang Ming, head of the China Mission to the EU, said that Pompeo was "trying to win hearts and minds of the Europeans with his long list of fake news".

"It is the latest example that the top US diplomat has been upping the ante to sling the mud on China," he wrote in a letter to the editor published in Politico on Wednesday. Pompeo has made multiple trips to Europe this year to pressure and threaten European leaders not to include Huawei in their 5G networks.

Zhang described Pompeo's arguments against Huawei as "a far cry from the truth".

"Despite all the witch hunt and media hype, not a single country or individual has come up with solid evidence to prove that Huawei poses a security threat," he said.

He cited German daily newspaper Der Tagespiegel's report in May that after years of review, the UK government, Germany's Federal Office for Information Security and the European Commission all failed to find any backdoor in Huawei.

Zhang argued that if Pompeo's logic stands, even a bottle of wine produced in a country with a different political system could be poisonous.

Zhang reminded Pompeo of the notorious PRISM program and US wiretapping of its close European allies. PRISM is a code name for a mass surveillance program conducted by the US National Security Agency. It was exposed by former NSA agent Edward Snowden in 2013. The German newspaper also reported in 2013 that the NSA wiretapped German Chancellor Angela Merkel's phone for at least 10 years since 2002.

The Chinese diplomat said that security is of paramount importance as new technologies mushroom, and that there are now ongoing efforts worldwide to enhance the security of 5G technology.

"To build a safe, open, transparent and healthy 5G ecosystem, only cooperation works in a spirit of mutual trust," Zhang said, adding that decoupling would lead to nowhere.

He said that Europe takes pride in multilateralism and upholds open markets. "It is my hope and belief that the Europeans will keep to the principles of fairness, justice and non-discrimination," he said.

Hua dismissed Pompeo's claim that China's National Intelligence Law makes clear that the CPC can force any 5G supplier headquartered in China to turn over data in secret.

"But it also provides that 'national intelligence work shall be conducted in accordance with the law, respect and safeguard human rights, and protect the lawful rights and interests of individuals and organizations'."

Hua said that China has never asked and will never ask any company or individual to break local laws and install backdoors to gather data, information or intelligence stored in foreign countries for the Chinese government or to provide it with such information.

German officials recently pointed out that China's laws demand nothing more from companies than the US CLOUD Act (Clarifying Lawful Overseas Use of Data Act) signed into law last year by President Donald Trump and the US Patriot Act signed into law in 2001 by President George W. Bush.