WORLD Chinese doctor saves people on the streets of Paris

Chinese doctor saves people on the streets of Paris

An old man suddenly fell on the street near the Opera House in Paris on Wednesday afternoon. Li Wentao, deputy director of neurosurgery at the First Affiliated Hospital of Xi'an Jiaotong University, who was visiting nearby, rushed to the scene. After about ten minutes, the old man recovered and his heart rate and breathing also returned to normal.

The video recording Li Wentao's rescue process was widely spread on the internet and triggered a lot of praise from internet users. Li was called "representative Chinese doctor".

Li and his family and friends spent their holiday in Paris. When they arrived near the Paris Opera, they found someone lying down on the street. "Because of professional instinct, I immediately rushed over." Li recalled that there were many people around the man who fell to the ground at the time, but they didn’t know what to do. Then Li told them in English that he was  a Chinese doctor and asked them to cooperate. 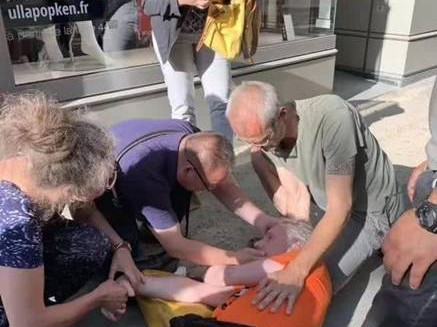 “He was foaming at the mouth and had dilated pupils, which I judged to be a seizure." Li said that the ambulance had not arrived. He first let the old man lie on his side to avoid airway obstruction. After a few minutes, the man gradually recovered and his heart rate and breathing returned to normal.

Li didn’t expect the video to be posted on the internet and cause so much attention. Saving people is the responsibility of doctors. Li said this is not his first time to face such a situation, nor will it be the last. He will step up every time.