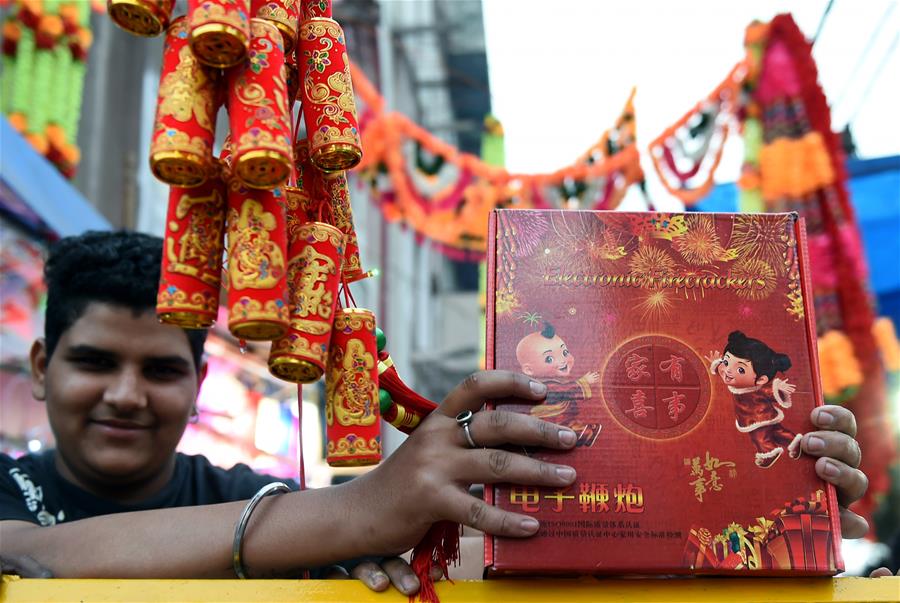 A vendor presents Chinese e-crackers at a market in New Delhi, India, on Nov. 3, 2018. Following Indian apex court's recent order banning the polluting fire-crackers, the Made-in-China electronic crackers, or e-crackers, have indeed created a buzz in the markets in Indian capital. TO GO WITH Roundup: Chinese e-crackers a solution to Delhi's air pollution ahead of Diwali festival. (Photo: Xinhua)

The Chinese e-crackers are as per the norms set by the court, as they do not emit smoke and also produce light and sound, thereby suitably dubbed as environment-friendly.

Bursting fire-crackers is an integral part of celebrations during the festival of lights or Diwali, one of the major festivals celebrated across India with much pump and show.

Over the past couple of weeks, the air quality in Delhi has been getting worse with each passing day, even a thick blanket of smoke has engulfed Delhi and its surrounding areas. One of the major causes of Delhi's polluted air is the burning of crops-residue (stubble) by farmers in the neighbouring states of Punjab and Haryana.

In the prevailing circumstances, the China-made e-crackers being sold in Delhi's Chandichowk area, which has a traditional wholesale market of fire-crackers, has caught everyone's attention. The crackers are ignited by a remote control, and create sounds below the standards set by the government.

Raju, one of the sellers of such e-crackers at the "Lala Lajpat Rai Market" in Chandnichowk area, right opposite the historic Red Fort, told Xinhua that it was a new trend among the youths who are more environment friendly. And, also there is a clear direction from the Supreme Court banning the polluting fire-crackers and allowing only the green non-polluting crackers.

The apex court also set the timing of bursting green-crackers, between 20:00 and 22:00 on the Diwali night.

"These e-crackers are absolutely non-polluting and operated with a remote by plugging into an electric circuit. They produce light and sound, thereby perfectly suiting the festival of Diwali. As the festival of lights is approaching, the demand for such Chinese e-crackers is rising. Also these crackers are the only option for people as the real crackers which emitted a lot of smoke have been banned by the apex court," added the seller.

On the other hand, the sellers of the traditional crackers are unhappy as they averred that the Supreme Court order had adversely affected their business this year, to the extent of 30 percent.

"For the past several decades, my family has been into the business of selling fire-crackers throughout the year. But this year we are suffering huge losses due to the sudden Supreme Court order. Though we respect the apex court's order, but we had already bought huge stocks of fire-crackers for selling during the Diwali festival, and now all the stocks have gone waste in the wake of the ban," a fire-crackers seller in Chandnichowk area was quoted as saying by a local TV channel.

The court order is seen as a serious attempt to curb the air pollution in Delhi and its surrounding areas. As per the data of the Central Pollution Control Board (CPCB), the overall air quality index (AQI) of Delhi was recently recorded at 370, which falls in the "very poor" category.

On Friday, the PM2.5 level was recorded at 210. Fine particulates can be a matter of more serious health concern than PM10. As per data issued by the state-owned System of Air Quality and Weather Forecasting And Research (SAFAR), the PM10 level in Delhi stood at 334.

In a bid to check air pollution, the Central Pollution Control Board (CPCB) has laid a special focus on the regions recording "severe" air quality, and deployed dedicated teams to monitor violations, especially at the sites where garbage or industrial waste is normally burnt.