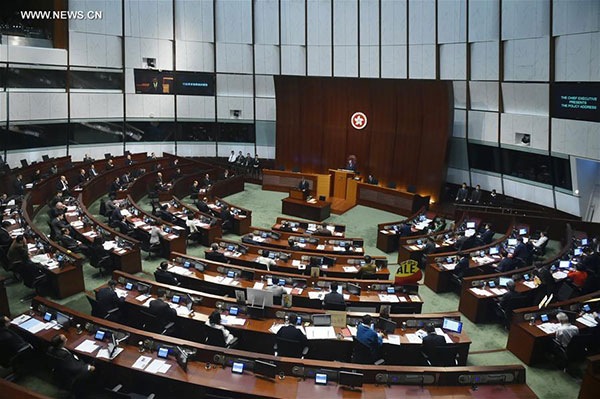 Washington (People's Daily) - Spokesperson of the Chinese Embassy in the United States on Friday criticized a statement by the "Five Eyes" intelligence alliance over China's decision to disqualify certain Hong Kong Legislative Council (LegCo) members. The embassy urged “Five Eyes” countries, including the US, to stop interfering in Hong Kong affairs and China’s internal affairs.

The spokesperson’s remarks are as follows:

The Foreign Ministers of Australia, Canada, New Zealand and the United Kingdom, and the Secretary of State of the United States issued a joint statement on Hong Kong, making irresponsible comments about the decision of the Standing Committee of China’s National People’s Congress on the eligibility of the Legislative Council members of Hong Kong Special Administrative Region. Their statement has openly breached international law and basic norms governing international relations and grossly interfered in Hong Kong affairs and China’s internal affairs. The Chinese side is strongly concerned about and firmly opposed to it.

The NPC Standing Committee’s decision on this matter, made in accordance with China’s Constitution, Hong Kong SAR’s Basic Law and national security law, is a necessary move to uphold and safeguard the principle of “One Country Two Systems” as well as rule of law and the constitutional order of Hong Kong SAR. It is fully legitimate, justified and in strict keeping with the Constitution and other laws. People in public office must uphold their country's constitutional laws and honor the pledge of allegiance to their country. This is something plain and simple. No place in the world, not the United States, will turn a blind eye if they violate such allegiances and betray their country. It is the same for Hong Kong as part of China.

Meanwhile, since Hong Kong’s return to China, the legal basis of the Chinese government’s administration of Hong Kong SAR has been China’s Constitution and the Basic Law, not the Sino-British Joint Declaration. The Joint Declaration has never conferred any power on the United Kingdom or any other country to assume any responsibility over Hong Kong after its return. There is no legal basis or position for the Five Eyes Alliance to point fingers about Hong Kong affairs.

If one’s heart is blind, you do not expect his/her eyes to be bright. The Five Eyes Alliance countries, including the United States, should reflect on the racial superiority complex deep in their hearts, give up their pride and prejudice inherited from Hong Kong’s colonial rule and shed their illusion of using Hong Kong to contain China’s development and prosperity. We urge them to drop their hypocrisy and double standards, stop interfering in Hong Kong affairs and China’s internal affairs, and turn their eyes to their own governance issues that urgently need addressing. In today’s world, no attempt to pressure China or damage China’s sovereignty, security and development interests will ever prevail.