The Chinese embassy in the United Kingdom said it is "shocking" and "concerning" that some British politicians are spreading disinformation about China's handling of the novel coronavirus outbreak, asserting that the country's efforts and contribution should not be distorted. 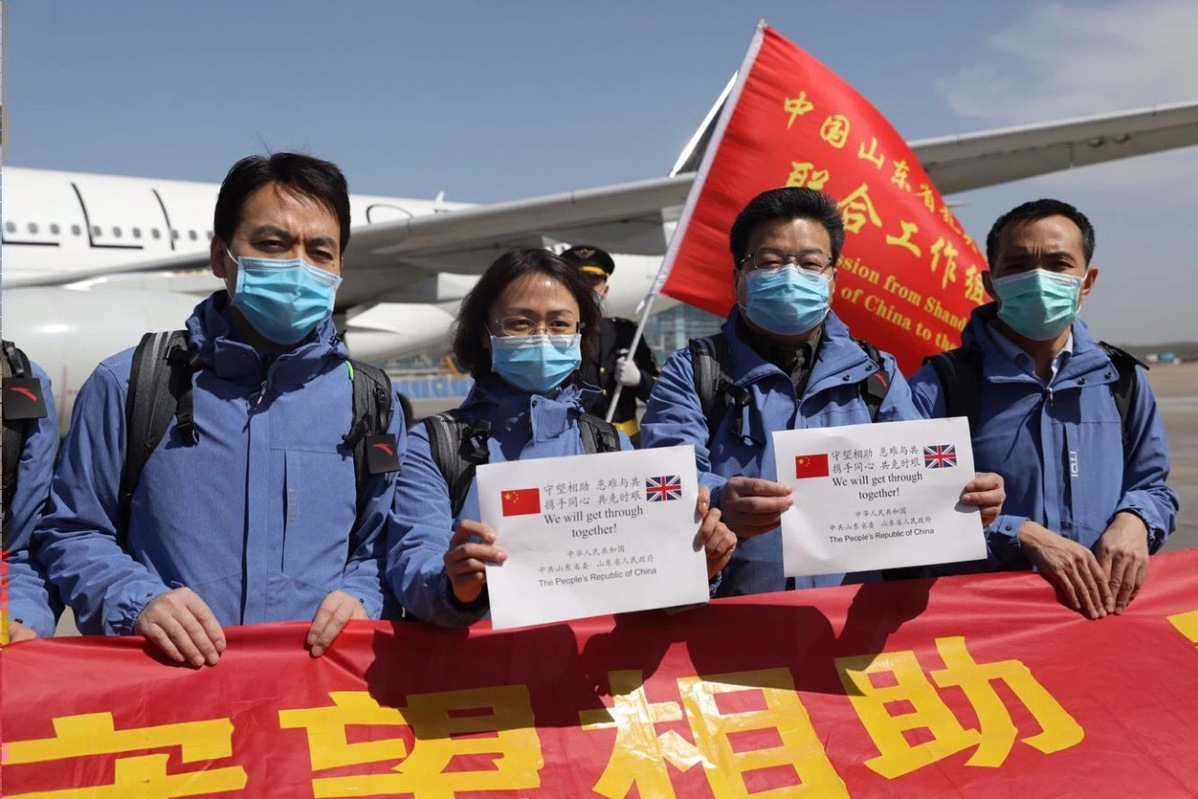 Members of a joint mission team dispatched by Shandong province to the United Kingdom held posters bearing "We will get through together" at Jinan Yaoqiang International Airport on Saturday. [Photo by Zhao Ruixue for chinadaily.com.cn]

On Monday, a report by the Commons Foreign Affairs Committee said: China's "deliberate misleading of the World Health Organization and scientists in other countries obscured analysis in the critical early stages of the pandemic."

A spokesperson for the embassy said: "Such reports completely disregard the tremendous efforts and huge sacrifice made by China and its people in its battle against COVID-19, and deny China's significant contribution to global public health and safety. We are shocked and deeply concerned.

"After the outbreak of COVID-19, China wasted no time in identifying the pathogen of the virus, sharing the genetic sequence with the World Health Organisation, taking the most effective, strict and comprehensive measures to contain the spread of the disease, sharing experience with other countries in need, and providing assistance to more than 120 countries, including the UK, and to four international organizations," the spokesperson added.

China's concerted effort to contain the virus has won repeated praise from the WHO. Tedros Adhanom Ghebreyesus, director-general of the WHO, has noted that China's measures not only protected its own people, but those of the entire world, and that China had, in fact, "bought time" for other nations.

The spokesperson emphasized that the virus respects no borders, does not distinguish between races, and said that: "it is a common enemy of mankind, and could only be defeated through a concerted effort from the international community. Prejudice, vilification and discrediting would only undermine the global response."

The spokesperson urged relevant British media and politicians to abandon their "arrogance and prejudice", and instead take an objective view of China's efforts and achievements in combating COVID-19, and contribute positive energy toward global public health and safety.

Christopher Bovis, a professor of International Business Law at University of Hull, said: "Reports which erroneously place blame on China for the spread of COVID-19 are undermining the efforts of the Chinese government and the sacrifices of the Chinese nation to combat the pandemic.

"This development goes against goodwill, at a time when international and cross-border collaboration is of vital importance.

"China has shown demonstrable commitment and willingness in collaborating on COVID-19 related research, vaccine development, and medical equipment provision, encouraging openness and data sharing to help ensure diagnostics, vaccines and prevention measures are developed rapidly for the benefit of every nation," he said.

Bovis said collective action and joint research and development will beat the pandemic, and China is playing a significant role.