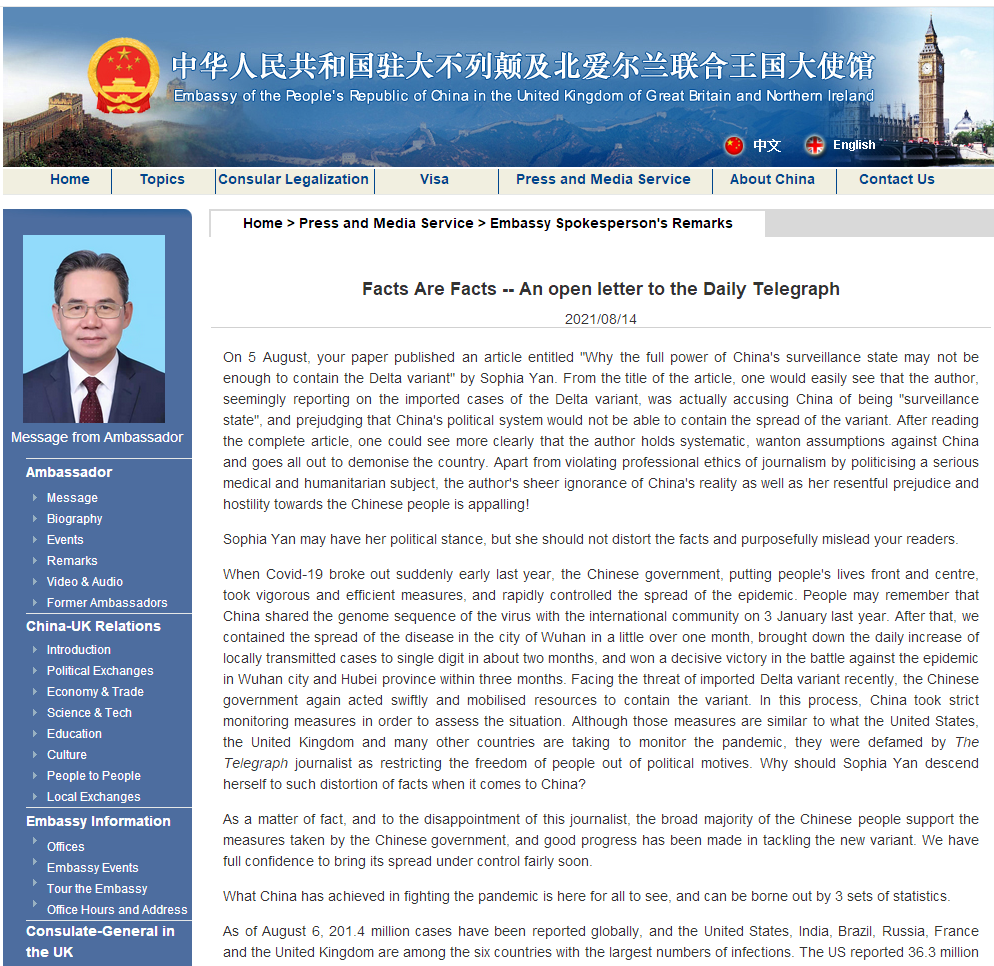 The Chinese Embassy in the UK published an open letter to the Daily Telegraph on Saturday entitled Facts Are Facts to refute a baseless article distorting China’s measures to contain the virus.

The Daily Telegraph published on August 5 an article entitled "Why the full power of China's surveillance state may not be enough to contain the Delta variant" by its journalist Sophia Yan that accuses China of being "surveillance state" and denies China's political system is containing the spread of the variant.

The Daily Telegraph article is full of baseless and wanton accusations against China by distorting the facts and purposefully misleading readers, violating the professional ethics of journalism, the letter said.

The full text of the letter is as follows:

On 5 August, your paper published an article entitled "Why the full power of China's surveillance state may not be enough to contain the Delta variant" by Sophia Yan. From the title of the article, one would easily see that the author, seemingly reporting on the imported cases of the Delta variant, was actually accusing China of being a "surveillance state" and prejudging that China's political system would not be able to contain the spread of the variant. After reading the complete article, one could see more clearly that the author holds systematic, wanton assumptions against China and goes all out to demonize the country. Apart from violating the professional ethics of journalism by politicizing a serious medical and humanitarian subject, the author's sheer ignorance of China's reality as well as her resentful prejudice and hostility towards the Chinese people is appalling!

Sophia Yan may have her political stance, but she should not distort the facts and purposefully mislead your readers.

When Covid-19 broke out suddenly early last year, the Chinese government, putting people's lives front and center, took vigorous and efficient measures, and rapidly controlled the spread of the epidemic. People may remember that China shared the genome sequence of the virus with the international community on 3 January last year. After that, we contained the spread of the disease in the city of Wuhan in a little over one month, brought down the daily increase of locally transmitted cases to single digit in about two months, and won a decisive victory in the battle against the epidemic in Wuhan city and Hubei Province within three months. Facing the threat of imported Delta variant recently, the Chinese government again acted swiftly and mobilized resources to contain the variant. In this process, China took strict monitoring measures in order to assess the situation. Although those measures are similar to what the United States, the United Kingdom and many other countries are taking to monitor the pandemic, they were defamed by The Telegraph journalist as restricting the freedom of people out of political motives. Why should Sophia Yan descend herself to such distortion of facts when it comes to China?

As a matter of fact, and to the disappointment of this journalist, the broad majority of the Chinese people support the measures taken by the Chinese government, and good progress has been made in tackling the new variant. We have full confidence to bring its spread under control fairly soon.

What China has achieved in fighting the pandemic is here for all to see, and can be borne out by 3 sets of statistics.

As of August 6, 201.4 million cases have been reported globally, and the United States, India, Brazil, Russia, France and the United Kingdom are among the six countries with the largest numbers of infections. The US reported 36.3 million cases and the UK 6.01 million. In China, the number is 93,605.

It is painful to see people, whatever their nationalities, suffer from Covid and our heart goes out to the victims and their families. But we cannot stand by while Sophia Yan and her kind chose to ignore the basic facts and made baseless accusations against China. Such behavior has crossed the line of conscience and represents a blatant insult to the 1.4 billion plus Chinese people!

In addition to controlling the spread of the virus at home, China has been doing its best to support the global endeavor against the pandemic in an effort to put into practice the vision of a community with a shared future for mankind. To begin with, China has shared the information of the virus and its experience in fighting the epidemic in a timely manner. Moreover, China has provided more than 200 countries and regions with large numbers of medical supplies, including 224.2 billion face masks, 2.31 billion protective suits, 2.92 billion pairs of surgical gloves and 271,000 respirators. In addition, China has already provided 750 million doses of COVID-19 vaccine to the world. And recently, President Xi Jinping announced that China will, by the end of this year, strive to supply 2 billion doses of vaccine to other countries and donate $100 million to COVAX for vaccine distribution to developing countries. Has any other country in the world done as much as China did in contribution to the global fight against the pandemic?

Whenever writing about China, The Telegraph journalist tends to upload criticisms about China's human rights situation. But the fact is, the human rights conditions in China have never been better since modern times. From day one of its founding, the Communist Party of China has regarded as its mission to pursue happiness for the people and rejuvenation for the nation. China's GDP has increased by 174 times and average life expectancy has risen from 35 to 77 since the founding of New China. In the past 40 plus years, 770 million rural residents have been lifted out of poverty according to the current poverty standards. In Xinjiang over the past 60 plus years, Uygur population has increased from less than 4 million to close to 12 million and average life expectancy has increased from a little over 30 to 72. In Xizang during the same period, the population of the Zang ethnic minority has increased from 1.15 million to over 3 million and average life expectancy has increased from 35 to 70. Despite this "hard evidence," some Western politicians and journalists are rattling on about "human rights violations in China," calling counter-terrorism, de-radicalization and solidarity efforts in China's Xinjiang "genocide" and "forced labor;" and labeling anti-separatism and social stability measures in China's Xizang as "restriction on freedom of religious belief." This is out and out disinformation against China!

Once a semi-feudal, semi-colonial, impoverished, weak and backward nation at the mercy of others 100 years ago, China is now the world's second largest economy, largest industrial country and largest trading nation with the biggest foreign exchange reserve. The fundamental reason behind these changes is that the Chinese people, under the leadership of the Communist Party of China, have found a development path that suits the country's national conditions, and this path is Socialism With Chinese Characteristics. Thanks to this political system, the enormous potential and initiative of the over 1.4 billion Chinese people have been brought into full play, which has enabled them to achieve two miracles rarely seen in the world, that is, rapid economic growth and sustained social stability. The Chinese people have strong confidence in our own path, theory, system and culture, and will remain committed to the path of our own choice and will surely continue to achieve greater success. The journalist of The Telegraph will never be able to comprehend this if she insists on seeing things through tinted glasses and with ideological bias.

What matters now is that we cannot sit by while Sophia Yan and her like continue spreading disinformation against China. Their problematic reports are preventing the British public and the international community from seeing the real China, disrupting global solidarity and cooperation in addressing urgent challenges, and undermining the goodwill between the Chinese people and people of the world, including the UK. Enough is enough! It is time to unveil their hypocrisy and stop them from vending lies.

We strongly urge The Telegraph to show courage to uphold the ethics of fair, objective and balanced reporting, shoulder its social responsibility, and live up to the promise of high-quality journalism since its first issue over 160 years ago.

(Compiled by Lyu Xingke; edited by He Jieqiong)