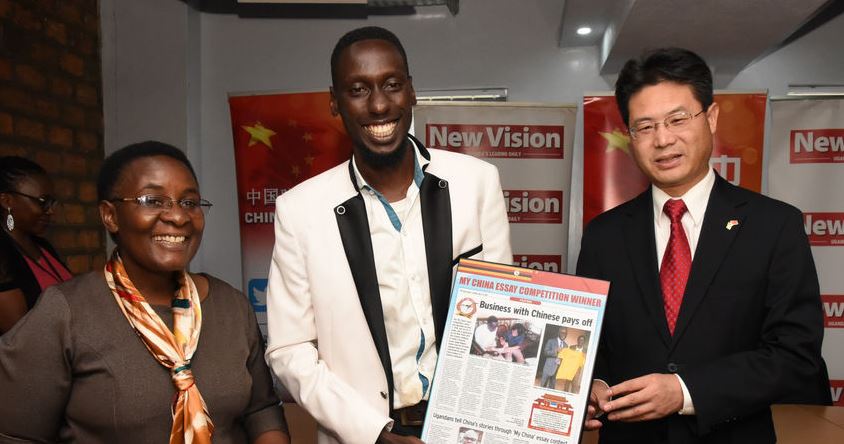 About 40 Ugandans who wrote stories that promote the relationship between China and Uganda were on Wednesday recognized by the Chinese embassy in Uganda.

The stories which have been running in the local daily, New Vision, since April this year had initially attracted 1,720 entries in a competition dubbed "My China Story" under the sponsorship of the Chinese Embassy in Uganda.

Among the stories written were those of university students who have been sponsored for different courses in China, business people who have benefited from Chinese counterparts and employees whose lives have been changed after earning salaries from Chinese employers.

Other stories were told by sports personalities who hailed the Chinese embassy for sponsoring them for international tournaments.

"I wouldn't have dreamt of playing on the international scene had it not been for the Chinese embassy in Uganda," she said.

"We would like to thank our Chinese friends for the great support they have extended to us. Apart from My China story, they are also sponsoring our Pakasa project where the best youth farmers in the country will be recognized and rewarded," she said.

She added that the embassy had also bought modern cameras for the company's television section.

She said that the stories had helped the audience to learn the Chinese culture, understand Chinese people and promote the relationship between the Asian country and Africa.

Chu Maoming, the Charge d'Affaires at the Chinese Embassy in Uganda, said the top five winners will be sponsored to travel to China in November to learn more about the development and people of China. The other winners were given goodies such as smartphones among others.

"Now China and Africa are building a comprehensive strategic and cooperative partnership. To forge this partnership, we must carry forward our traditional friendship and translate the strengths into driving forces to boost solidarity, cooperation and development," Chu said at a function held in Kampala.

He also announced that the embassy had already finalized the processing of visas for the Ugandan delegation that will be travelling to China to attend the Forum on China-Africa Cooperation (FOCAC).

"Chinese and African leaders will exchange in-depth views on the development of China-Africa relations and international and regional issues of common concern," Chu added.