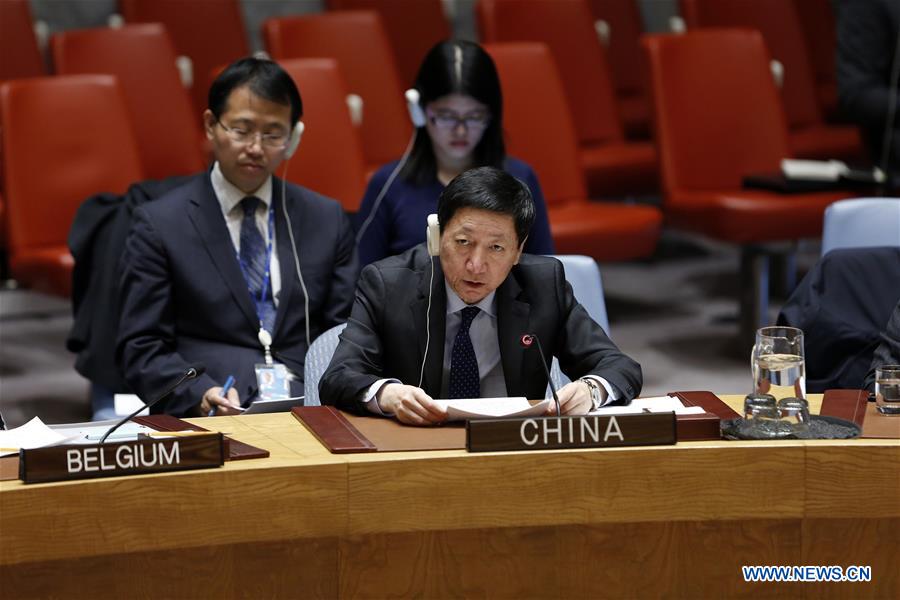 Wu Haitao (front), China's deputy permanent representative to the United Nations, addresses a Security Council meeting on the situation in the Middle East (Syria) at the UN headquarters in New York, March 27, 2019. Wu Haitao on Wednesday called on the international community to continue pushing for the political process in Syria. (Photo: Xinhua)

UNITED NATIONS, March 27 (Xinhua) - A Chinese envoy on Wednesday called on the international community to continue pushing for the political process in Syria.

"Years of conflict in Syria have brought untold misery to Syria and its people. The Syrian people yearn for an early peace so that they can return, rebuild, and resume a life in tranquility," said Wu Haitao, China's deputy permanent representative to the United Nations, in a Security Council meeting.

The UN should enhance its coordination with the Syrian government to facilitate the early formation of a constitutional committee that is representative and acceptable to the parties concerned, Wu said.

At the same time, it is necessary to take into account the legitimate concerns of the relevant parties in a balanced manner, including that of the Syrian government, with a view to set in motion of viable political process that can be sustained, he added.

The Chinese envoy also asked the international community to strengthen counter-terrorism cooperation in Syria, to adopt unified standard to fight all Security Council-listed terrorist organizations so as to prevent their return.

"In Idlib, there are signs pointing to the resurface of the terrorist organizations threatening security and the stability of Syria. This is the matter that must not be overlooked," said the Chinese envoy.

He also called on the international community to actively support the reconstruction in Syria, and to create conditions for the return of refugees and internally displaced people (IDPs).

A fundamental improvement of the humanitarian situation in Syria requires the international community to support the Syrian government and people in their economic and social reconstruction, so as to create conditions for the return of refugees and IDPs and help Syrian people rebuild their confidence and resume a normal life, said Wu.

Furthermore, Wu called on the international community to enhance its assistance to Syria in line with the humanitarian needs on the ground.

Around 11.7 million people require humanitarian assistance and protection inside the country in 2019 and more than 5.6 million Syrians live as refugees across the region, according to UN statistics.

"The sovereignty, independence, unity, and territorial integrity of Syria must be respected throughout all this process," said Wu, noting that China has all along supported a political solution to the Syrian issue, and China is ready to continue to play a positive and constructive role in moving forward the political process.