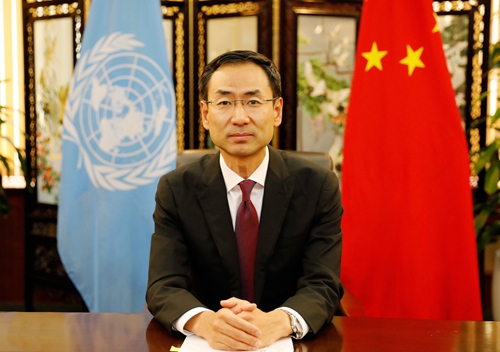 UNITED NATIONS, May 10 (Xinhua) -- A Chinese envoy on Monday asked a UN team investigating Islamic State (IS) crimes in Iraq to hand over evidence it collected to the Iraqi government so that the perpetrators can be brought to justice.

The UN Investigative Team to Promote Accountability for Crimes Committed by Da'esh/Islamic State (UNITAD) has collected a large amount of evidence. Only a timely transfer of the evidence to the Iraqi government can lead to tangible results of holding terrorists accountable, thereby achieving the intended objectives of UN Security Council Resolution 2379, said Geng Shuang, China's deputy permanent representative to the United Nations.

"We hope UNITAD will hand over evidence to the Iraqi side in a timely and complete manner in accordance with relevant Security Council resolutions," he told the council.

Terrorism is the common enemy of humanity. The international community should continue to support Iraq in its fight against terrorism, bring terrorists to justice, and consolidate hard-won counterterrorism gains. At the same time, the international community should also earnestly respect Iraq's sovereignty and jurisdiction over crimes committed on its soil, and support Iraq in its pursuit of accountability against terrorists in accordance with domestic laws, he said. "We appreciate Iraq's active effort to take forward its domestic legislation to hold former IS terrorists accountable."

All the parties concerned and the United Nations should also support Iraq in dealing with foreign terrorist fighters within Iraqi territory, he added.

In its report, UNITAD put forward some preliminary ideas about a "completion strategy." China encourages the investigative team to fully communicate and coordinate with the government of Iraq in this regard. The Security Council should also conduct a study and discuss the relevant issues in due course, he said.