The Chinese permanent representative to the United Nations, Zhang Jun, in his capacity as president of the Security Council for the month of March, attended a virtual joint briefing by the UN principal organs to member states on COVID-19 response. 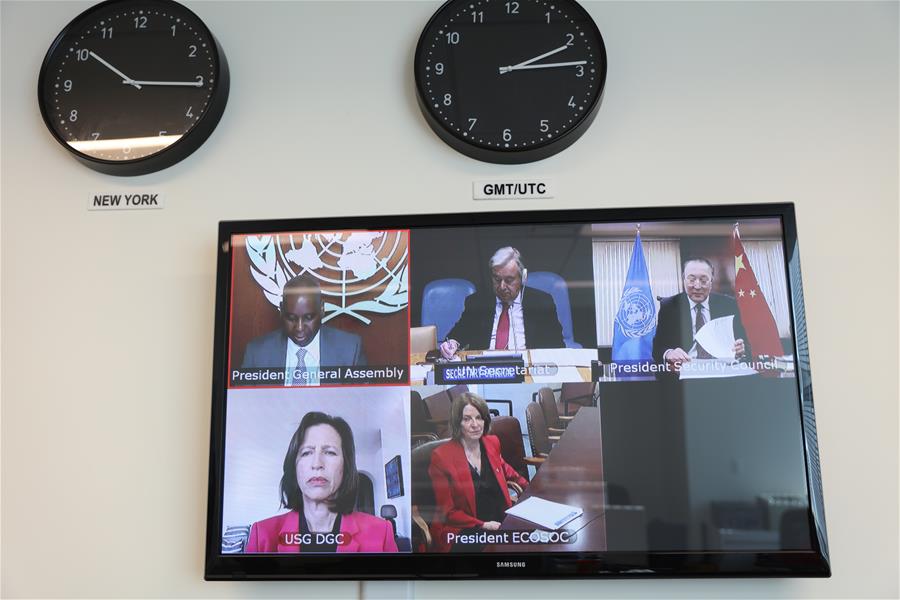 COVID-19 is posing huge challenges to the operation of UN organs, including the Security Council, which has primary responsibility for the maintenance of international peace and security, said Zhang.

As president of the Security Council for March, China attaches great importance to the work of the council and has been working closely with other council members in addressing the challenges brought by the pandemic and discharging the council's responsibilities under the UN Charter, he said.

The council has adjusted its work plan in a timely manner so as to proactively prevent and control risks of the virus. As the outbreak worsened in New York City and in view of the relevant arrangements by UN Headquarters, the council postponed its meetings in the third week of March, and adjusted its meetings this week, with the use of new methods of discussions, said Zhang.

The council is actively exploring new working methods as the pandemic has made physical meetings at UN Headquarters more difficult, he said.

Council members, with the support of the technical department of the UN Secretariat, set up a video teleconference (VTC) system and the first VTC meeting was held on Tuesday, followed by another one on Thursday.

The Security Council is working hard to carry out its duties by responding timely to hot-spot issues and, at the same time, to keep the transparency of its work, he said.

Due to the adjustment of working methods, there are more uncertainties about the work program of the council at this moment. Council members fully understand the importance of information access and transparency, he said.

In this context, council members have tried their best to provide press elements after VTC discussions. With the further improvement of methods, UN member states will have more information access to the work of the Security Council, he said.

Zhang emphasized that the council is in action and does not relax in its duties for even a moment. While addressing the challenges of the pandemic, council members will do whatever they can to fulfill the responsibility for maintaining international peace and security.

President of the General Assembly Tijjani Muhammad-Bande, Secretary-General Antonio Guterres, President of the Economic and Social Council Mona Juul, together with several senior officials of the UN Secretariat attended the joint briefing. UN member states participated and raised questions via the Internet.