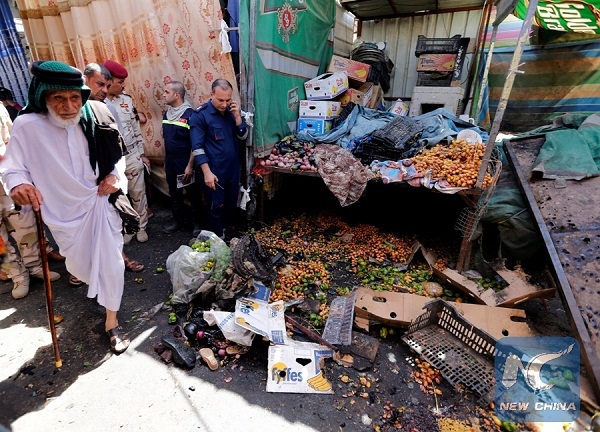 A man walks at a crowded market where a bomb went off in Baghdad's Sadr City district, Iraq Aug. 14, 2018. (Photo: Xinhua)

At a Security Council meeting on Iraq, China's permanent representative to the United Nations Ma Zhaoxu said the Iraqi government should speed up its national reconstruction process, give full play to its advantage in resources, promote its economic development, enhance its capacity in providing public services, and improve people's livelihood.

The international community should continue to provide support and assistance to Iraq, ease its humanitarian situation, assist Iraq in its economic recovery, and create a favorable environment for its national reconstruction, he added.

The Chinese diplomat pledged that China supports any effort conducive to the political settlement of the Iraqi issue and fight against terrorism, adding "China will as always participate in the economic reconstruction of Iraq and continue to provide assistance to the best of its ability."

Ma also called for continuous support for combatting terrorism in Iraq. "Relevant parties should strengthen counter-terrorism cooperation, unify standards and fight all Council-listed terrorist organizations and resolutely contain terrorist forces, curb the return of their activities as well as the momentum of their spread."

At Tuesday's council meeting, the UN top envoy for Iraq Jan Kubis also called on the international community to support Iraq in rebuilding the country.

Kubis, the special representative of the United Nations secretary-general for Iraq, said the new government of Iraq intends to start rebuilding immediately, particularly on the delivery of services and jobs, on reforming and energizing the economy, fighting corruption and administrative red tape.

The Iraqi parliament elected Barham Salih as the country's new president and confirmed Adel Abdul-Mahdi as prime minister in October, and 14 cabinet ministers were endorsed.

While the government formation process has not been without controversy, "competition and differences have been largely political and not sectarian, and in this way, a break from the past," said Kubis.

Kubis said the government's program outlines specific plans for reforms, investment, and for transitioning Iraq from a crisis context to sustainable development, and it recommends steps to tackle corruption across all sectors, and sets out a framework to guide the planning and work of each ministry.