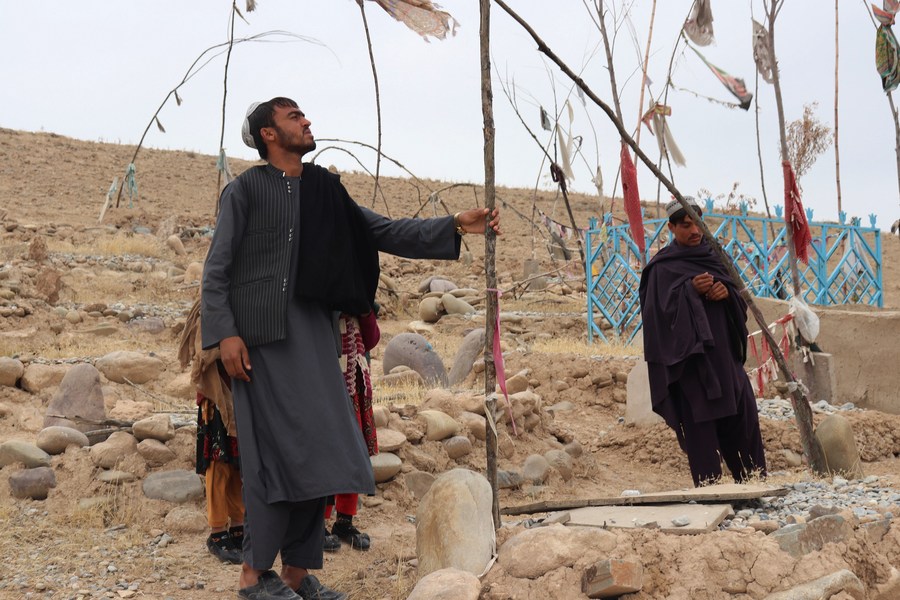 The relatives of victims killed by Australian troops during their mission mourn at a tomb in Tirinkot, capital of Uruzgan, Afghanistan, Nov. 22, 2020. (File photo: Xinhua)

Although important progress has been made in international counter-terrorism cooperation, the current world situation on this front remains complex and severe with terrorism and violent extremism intertwined, said Dai Bing, the charge d'affaires at the Chinese Permanent Mission to the United Nations.

In the first half of this year, the Islamic State has regrouped in places such as Iraq and Syria and has further infiltrated the African region. COVID-19 has posed economic and social challenges, which may bring a new wave of terrorism, he told the Security Council.

"The international community needs to attach great importance to this matter and adopt comprehensive measures to jointly respond to the threat of terrorism," said Dai.

In fighting terrorism, emphasis should be placed on the prevention and elimination of its root causes. Counter-terrorism measures should focus on long-term solutions by addressing both symptoms and root causes, he said.

It is important to adopt comprehensive political, economic, judicial, and social means and stick to peaceful solutions to hot-spot issues through political means. It is important to assist member states in eradicating poverty, strengthening capacity-building, promoting sustainable economic and social development, and advocating mutual respect and harmonious coexistence among different civilizations, religions, and ethnic groups, he said.

Young people are susceptible to extreme ideologies. Therefore, special attention should be paid to strengthen youth education and employment in order to provide a favorable environment for their growth. Countries should carry out exchanges and cooperation on terrorism prevention and de-radicalization, such as vocational training and community correctional measures so as to help vulnerable countries strengthen their counter-terrorism capacity-building, he noted.

In fighting terrorism, it is important to focus on key issues while taking into consideration new development, he said. "We must be highly vigilant against terrorist forces using COVID-19 to instigate terrorist activities, and we must strive to solve outstanding problems, such as the abuse of the internet and emerging technologies by terrorists, diversification of terrorist financing channels, and the confluence of organized crimes."

China will continue to actively work with counter-terrorism platforms like the United Nations, the Shanghai Cooperation Organization, and the Global Counter-terrorism Forum, and to strengthen exchanges and cooperation with all sides in a joint effort to respond to terrorist threats and maintain world peace and stability, he said.