Chinese envoy calls for int'l consensus on fight against terrorism

UNITED NATIONS, Aug. 23 (Xinhua) -- A Chinese envoy to the United Nations on Thursday called for international consensus in the fight against terrorism. 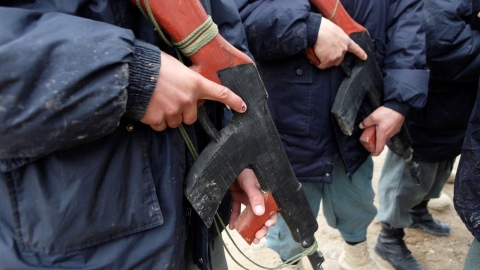 The international community should adhere to unified standards, and adopt a zero-tolerance and nondiscriminatory attitude in resolutely combatting terrorism, said Wu Haitao, China's deputy permanent representative to the United Nations.

Wu asked for joint efforts to address the root causes of terrorism.

The international community should push for political settlement of global issues, assist member states in achieving economic and social development and reduce poverty, refrain from linking terrorism with specific ethnic groups and religions, and promote dialog on an equal footing among civilizations and religions to create a harmonious coexistence, all in an endeavor to build a new type of international relations, he said.

He asked the international community to stem the cross-border flow of terrorists.

Terrorist organizations have suffered heavy losses in Iraq and Syria recently. But the movement and return of terrorist fighters still pose a serious threat to the security and stability of countries of origin, transit and destination.

The countries concerned should strengthen cross-border control and law enforcement cooperation, share intelligence resources, and strengthen their capacity to jointly curb the flow of terrorist fighters.

Wu raised the issue of combatting terrorist activities on the Internet.

In the past few years, China has been deeply involved in multilateral bodies such as the United Nations and the Shanghai Cooperation Organization, he said.

China will continue to participate in and promote multilateral and bilateral cooperation against terrorism and provide assistance to developing countries. China is ready to work with other countries to jointly address the threat of terrorism and violent extremism in order to maintain world peace and tranquillity, he said.

Terrorism is a common enemy of mankind and knows no national borders. It is hard for any country to respond to it alone, he said.

The international community should effectively implement relevant Security Council resolutions and strengthen cooperation to jointly respond to the threats of terrorism, he said. Enditem