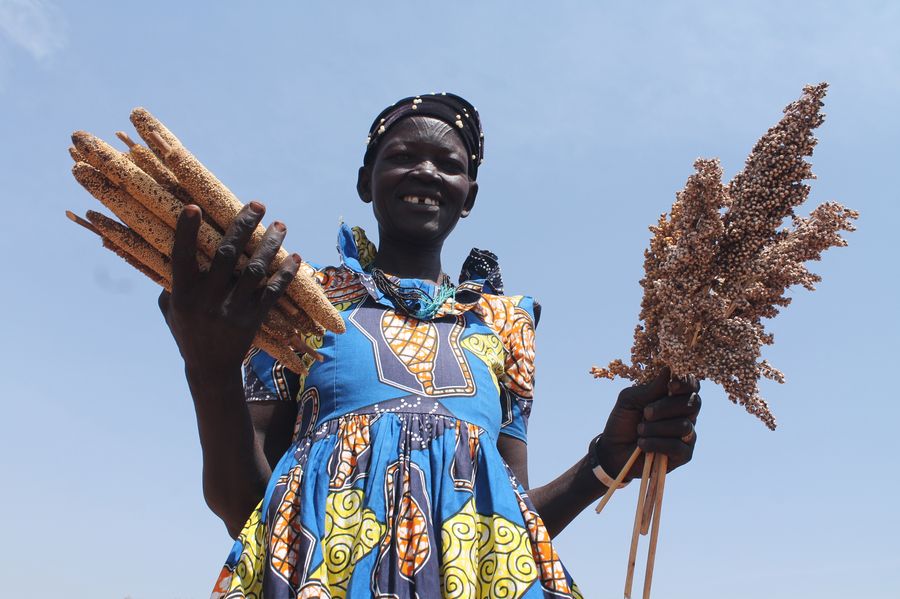 A South Sudanese farmer displays some of the produce she cultivated from a farm in Panker village, Eastern Lakes State, South Sudan, Jan 21, 2020. (File Photo: Xinhua)

"Next month, South Sudan will celebrate its 10th anniversary of independence. We should seize this as a new starting point to redouble our efforts to achieve the peaceful development of South Sudan. The international community should continue to provide constructive support," said Dai Bing, China's deputy permanent representative to the United Nations.

Recently, South Sudan's transitional government has overcome numerous difficulties and completed the restructuring of the transitional national legislative assembly, improved the local governance structure, and started constitution-making, among other achievements, he told the Security Council.

He asked all parties in South Sudan to work to build on the achievements, and called on the opposition coalition to reach a peace agreement with the South Sudanese government as soon as possible.

The issue of South Sudan is complex, and the implementation of the Revitalized Agreement cannot be achieved overnight. The international community should fully consider the national conditions of South Sudan, fully respect its leadership in handling its own affairs, support regional organizations in playing an active role, provide targeted assistance instead of only exerting pressure, said Dai.

The Security Council should respond to the appeal of the African Union as soon as possible and lift the sanctions against South Sudan, sending a positive message, he said.

The cease-fire in South Sudan is generally maintained while the security situation remains fragile. Intercommunal conflicts, armed violence, competition for land resources and other issues still exist. China calls on the parties concerned to honor their cease-fire commitments and actively commit themselves to the peace process, he said.

Intercommunal conflict is an old problem. Efforts should be made to strengthen early warning, adopt preventive actions, promote intercommunal reconciliation to eliminate the root causes. The international community should strengthen capacity building of the government of South Sudan and enhance its ability to protect civilians, he said.

China has sent more than 3,000 tons of food and other humanitarian aid, over 10 batches of supplies in fighting the pandemic, and dispatched medical expert teams. At the same time, China has maintained its support in infrastructure, construction, education, health care and other fields to South Sudan, said Dai.