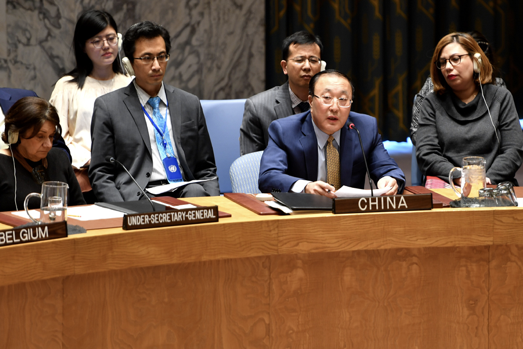 A Chinese envoy on Friday called for multilateralism on the 75th anniversary of the end of World War II in Europe.

"Multilateralism is a collective choice made by humanity at the cost of a world war. Thanks to multilateralism, mankind has enjoyed 75 years of peace and development. No country can make itself great in isolation," said Zhang Jun, China's permanent representative to the United Nations.

"The United Nations is a product of World War II. We need to uphold the UN-centered international system, maintain international order based on international law, and safeguard the purposes and principles of the UN Charter," he told an Arria Formula virtual meeting of the Security Council.

He asked for adherence to a path of peaceful development.

The world is undergoing major development, transformation and readjustment, but peace and development remains the call of the times. It is the shared expectation and in the interests of all peoples. The international community should work for a new type of international relations featuring mutual respect, fairness, justice and win-win cooperation, Zhang said.

"We need to adopt a people-centered approach in development, facilitate the implementation of the 2030 Agenda, and promote lasting peace through sustainable development," he said.

He advocated the settlement of disputes through peaceful means.

The world today is an interconnected community. All countries should prioritize dialogue and consultation, build trust and promote cooperation, so as to resolve differences and disputes peacefully, he said. "We must oppose willful use or threat of use of force, power politics and all forms of hegemony and bullying practice."

The world is facing a war against COVID-19. The virus is a common enemy, and solidarity and multilateral cooperation is the most powerful weapon, said Zhang.

"To win this war, we must stand in solidarity, support the United Nations and the World Health Organization in playing a leading and central role, and form synergy in our efforts. Governments of all countries should shoulder responsibilities, put people first, respect science, and take all necessary measures to protect lives and health. We must firmly oppose politicizing the pandemic, spreading misinformation and lies, or shrugging off one's own responsibilities for political gains," he said.

Stronger and better multilateral cooperation is key to winning the war against COVID-19, said Zhang. "Now more than ever, it is a lesson that we cannot afford to ignore."