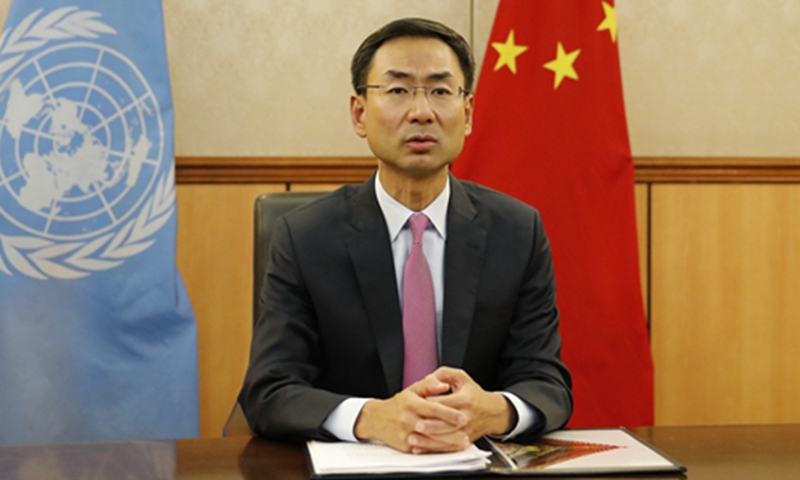 China supports the United Nations and the EU in carrying out cooperation in accordance with the purposes and principles of the UN Charter, and in jointly upholding and practicing genuine multilateralism, said Geng Shuang, China's deputy permanent representative to the United Nations.

The COVID-19 pandemic has once again demonstrated that all countries in the world are a collection of intertwined interests with a shared future. No country can stay out of harm's way by looking after its own interests only, nor can any country fight alone, he told a Security Council meeting on UN-EU cooperation.

Strengthened cooperation between the United Nations and regional and sub-regional organizations helps strengthen the international collective security mechanisms, maintain international peace and security, contribute to the response to global challenges, and promote the common development of all countries, he said.

"The times we live in and the challenges we are facing make multilateralism imperative. The EU itself is a product of multilateral response to common challenges. As an important force on the world stage and an active advocate of multilateralism, the EU should take the lead in respecting international law and the universally accepted basic norms governing international relations, holding fast to the principles of mutual respect, treating each other as equals and working together for mutually beneficial outcomes, renouncing double standards, avoiding bloc politics, and opposing division and confrontation," he said.

China hopes that the EU, in its external engagement, will pursue the policy of non-interference in other states' internal affairs. China would like to see an EU that champions genuine multilateralism and plays a greater, more positive and constructive role in international affairs, said Geng.

For a long time, the EU has done a great deal of useful work to help neutralize the tensions and bridge differences between various parties, resolve some regional hot-spot issues, and implement Security Council resolutions, he said.

China acknowledges the EU's efforts to pursue a return to compliance with the Iran nuclear deal and hopes that the EU will continue to play its coordinating role and work with all parties concerned to help bring about an expeditious political solution to the Iranian nuclear issue. China looks forward to the EU continuing to contribute to the maintenance of peace and stability on the African continent, and in particular, to lend stronger support to African-owned peace operations. China commends the EU for its long-standing assistance in improving the humanitarian situation in the occupied Palestinian territory, and hopes the EU will continue to play a constructive role in promoting a comprehensive, just, and lasting solution to the Palestinian issue, he said.