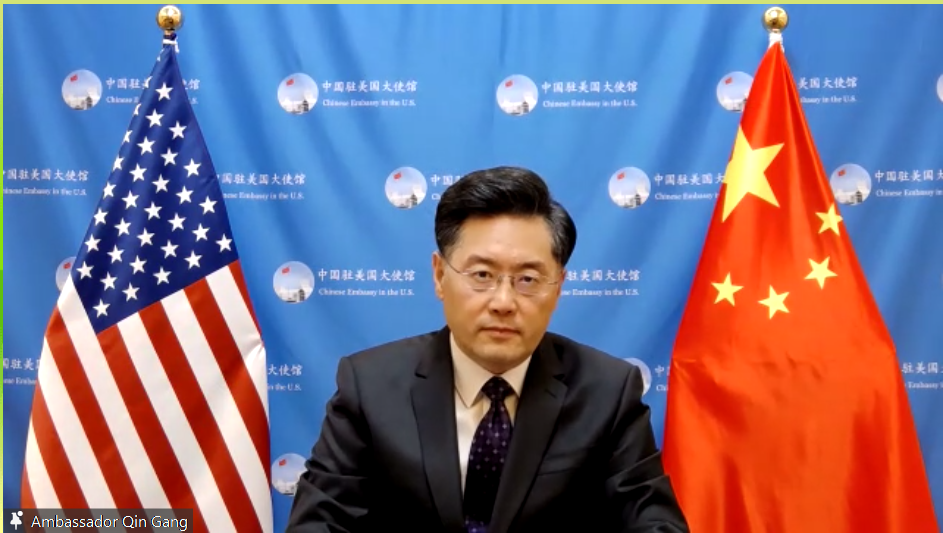 Chinese Ambassador to the US Qin Gang. (Photo provided to chinadaily.com.cn)

Beijing's top envoy in Washington has rejected charges that China has used a "debt trap" to secure influence in Africa, a continent that he said should be a venue for international cooperation rather than competition for geopolitical gains.

"China's investment and financing assistance to Africa is not a trap, it's a benefit," Ambassador Qin Gang said at a Semafor news event ahead of the US-Africa Summit scheduled to open Tuesday in Washington.

Semafor is a global news outlet that debuted last month.

China's Foreign Ministry has called talk of a Chinese "debt trap" a narrative trap that the US and some other Western countries use to defame and smear China and disrupt China's cooperation with other developing countries.

"Obviously, there's no such trap. It's not a plot; it's transparent. It's sincere," he said.

The report said that interest rates on private loans are almost double those on Chinese loans, while the most indebted countries are less likely to have their debt dominated by China.

"China is not the biggest creditor of African debts," Qin said. "The debt owned by China is only a small amount."

China has participated in the Debt Service Suspension Initiative of the Group of 20 and has suspended the most service payments among G20 members, according to Qin.

"We call on all other creditors, multinational internet institutions and the private lenders to take active actions to reduce the debt burden of African countries," he said.

Qin said he hoped that the US-Africa Summit will produce more concrete and workable measures to help Africa.

"We believe that Africa should be a place for international cooperation, not for major powers competition for geopolitical gains," he said. "We welcome all other members of the international community, including the United States, to join us in their global efforts to help Africa."

There are many areas and projects where China and the United States can work together, and the world expects the two countries to cooperate, bearing in mind their important responsibilities for the benefit of the world, he said.

In 2015, the two nations helped African countries like Liberia fight the Ebola virus. They also have joined local partners to build several economic projects, which are still operational, according to the ambassador.

For example, a textile industry park in Ethiopia, jointly sponsored, built and operated by China, the United States and Ethiopia, has become very productive and exported garments to Europe and North America markets.

"So that's very successful, so we can work with the United States on the peace, security and prosperity in Africa," he said.

There have been calls for China and the US to ramp up cooperation in agriculture and infrastructure to help alleviate hunger and poverty in some parts of Africa.

A report released by the US Heartland China Association and the Carter Center in September noted that 39 countries, mostly in Africa and South Asia, have alarming levels of hunger.

"The US and China are in the position to lead the effort in combating global hunger by increasing agricultural productivity and by promoting economic development in Africa and South Asia," the report noted.

Monica Medina, assistant secretary of state, Bureau of Oceans and International Environmental and Scientific Affairs, on Monday said there are 821 million people in Asia and Africa who face food insecurity.

Kenneth M. Quinn, president emeritus of The World Food Prize Foundation in Des Moines, Iowa, said a Sino-American collaboration could help meet the greatest challenge humanity has ever faced: to sustainably and nutritiously feed the 9 to 10 billion people who will be alive on planet in 2049.

For example, the two largest economies could work together to upgrade the rural road infrastructure across the Africa continent, Quinn told China Daily in an earlier interview.

"In doing so, China and the United States would be assisting African institutions by literally providing a 'road out of poverty', while also helping meet what is arguably the 'greatest global challenge in human history'," he said.