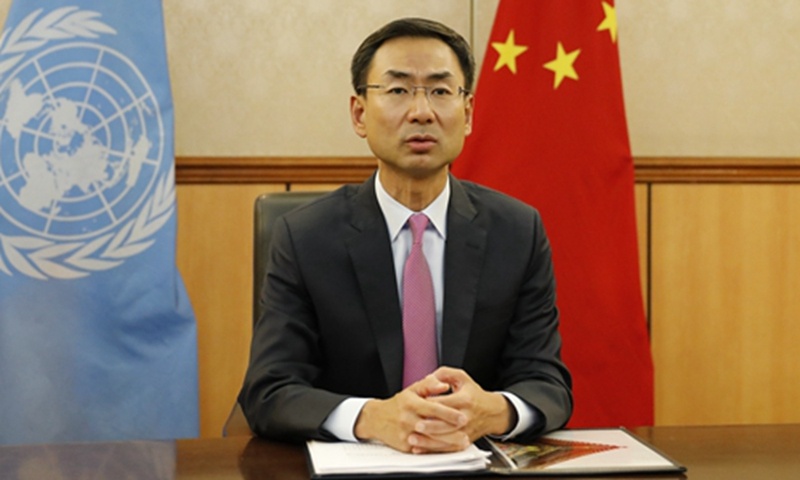 The COVID-19 pandemic and existing threats, such as regional hot-spot issues, ethnic conflicts and terrorism, affect and exacerbate each other, bringing new impacts to international peace and security. In this context, the role and significance of UN peacekeeping operations have become more prominent, said Geng Shuang, China's deputy permanent representative to the UN.

The UN peacekeeping operations should prioritize the fight against the pandemic, the most urgent task of the international community, and provide security and logistical assistance to the host countries within their mandates, he told a plenary meeting of the UN Special Committee on Peacekeeping Operations.

Host countries are often the weak links in achieving universal COVID-19 vaccine distribution, where the UN peacekeeping operations should provide support in the supply, transportation, and administration of vaccines. Meanwhile, peacekeepers should be prioritized in vaccination, he said

The host country bears the primary responsibility of protecting civilians, promote human rights, and empowering women. Peacekeeping operations could provide constructive assistance at its request in these regards, but cannot replace the host country's efforts nor erode the mandate of other UN agencies, said Geng.

He asked for efforts to strengthen the safety and security of peacekeepers with a greater sense of urgency as their operating environment has become more complex and dangerous.

Calling for strong partnerships among stakeholders, Geng said the UN General Assembly, the Security Council, the UN Secretariat, the host countries, the donor countries, the troop-contributing countries should all perform their respective duties, coordinate their actions, and share the responsibility for improving peacekeeping performance.

China will continue to work closely with the international community to promote the effectiveness and efficiency of UN peacekeeping operations, and play a bigger role in maintaining international peace and security, the envoy said.