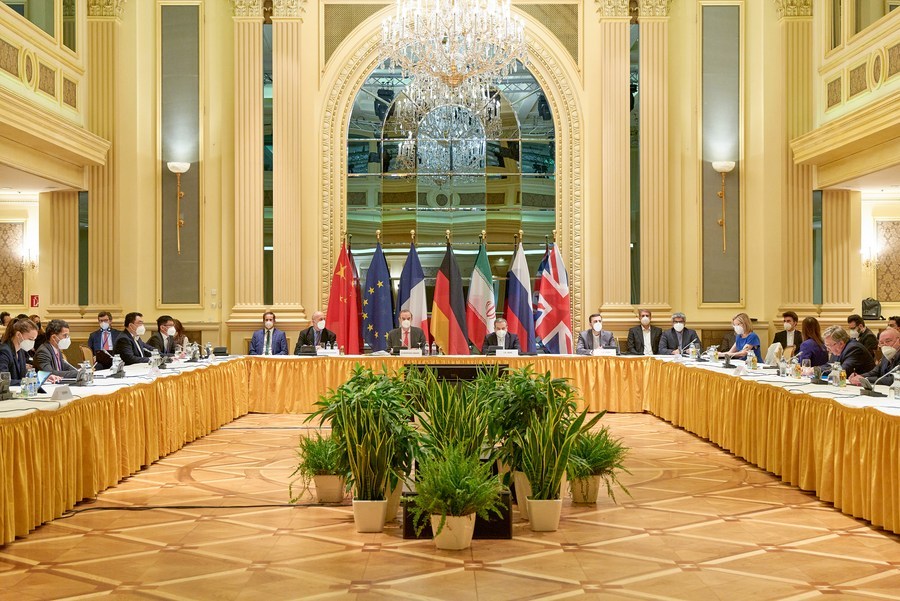 Photo taken on April 20, 2021 shows a meeting of the Joint Commission of the Joint Comprehensive Plan of Action (JCPOA) in Vienna, Austria. (Photo: EU Delegation Vienna/Handout via Xinhua)

The sequence in which the United States and Iran return to compliance with the 2015 Iran nuclear deal, or the Joint Comprehensive Plan of Action (JCPOA), is first and foremost a matter of "sense of justice," said Wang Qun, Chinese envoy to the United Nations and other international organizations in Vienna, on Tuesday.

Wang made the remarks after attending the latest meeting of the JCPOA Joint Commission. The meeting was chaired by Enrique Mora, the deputy secretary general and political director of the European External Action Service (EEAS) and attended by representatives of China, France, Germany, Russia, the United Kingdom and Iran.

The Joint Commission's negotiations on getting the United States and Iran to resume compliance with the JCPOA have entered the fourth week, said Wang, stressing that "it will be a very important week."

The negotiations have made some important progress, whereas some significant differences are yet to be ironed out, Wang noted.

"China believes that the issue of the sequence in which the United States and Iran resume the implementation of the JCPOA is first and foremost a matter of sense of justice," Wang said. "The cart shouldn't be put before the horse." 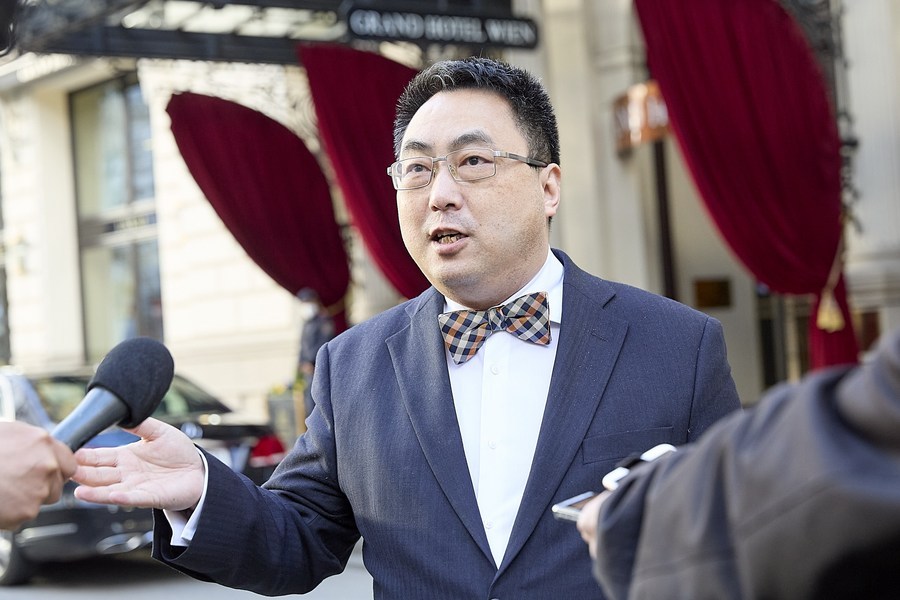 Wang Qun, Chinese envoy to the United Nations and other international organizations in Vienna, receives interview after a meeting of the Joint Commission of the Joint Comprehensive Plan of Action (JCPOA) in Vienna, Austria, April 6, 2021. (Photo: Xinhua)

"The current Iranian nuclear crisis was caused by the former U.S. government, which unilaterally withdrew from the JCPOA and exerted extreme pressure on Iran," Wang said. "Therefore, the United States should first remove all illegal unilateral sanctions on Iran and third parties. This is the key to the success of the negotiations."

"All parties must continue to focus on and resolve this core issue first. At the same time, the Joint Commission should also consider how to verify the U.S. lifting of sanctions," Wang added.

"China hopes that all parties concerned will maintain the current momentum of negotiations, stick to the right direction and the existing consensus, and work tirelessly to achieve the overall goal of the negotiations," Wang said.

Before the talks, Wang, together with Iranian Deputy Foreign Minister Abbas Araqchi and Russia's Permanent Representative to the United Nations (Vienna) Mikhail Ivanovich Ulyanov, held a trilateral meeting, fully exchanging views on key issues concerning the United States and Iran returning to compliance with the JCPOA.

Also on Tuesday, the Chinese envoy met with Mora from EEAS and exchanged views on pushing forward the current negotiations. Wang stressed that China supports the European Union in playing an active role as the coordinator in the negotiations.