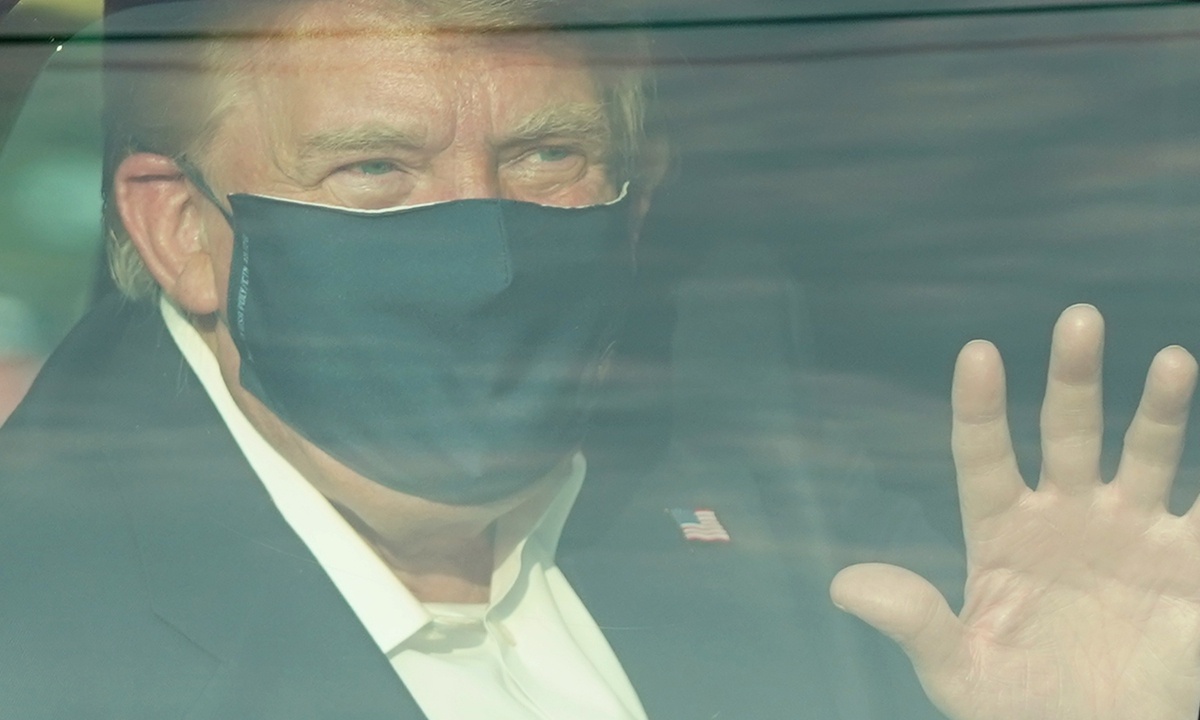 Chinese frontline medical experts believe that US President Donald Trump is likely in a more serious condition from COVID-19 than the rosy image being painted by Trump's medical team, as Chinese netizens closely follow updates online, and express concern over the health risks of his joyride out of the hospital on Sunday night.

However, Trump's brief ride-by has sparked criticism, and observers believe that Trump's attempt to project strength and rally support for his election amid his illness could backfire because he ignored standard COVID-19 treatment procedures, and put people around him at risk.

Trump's medical team's optimistic assessment of his condition has also come under fire. The public is also confused by the timeline of Trump's infection and his treatment, after mixed messages from the White House.

The statement conflicted with the rosy picture of Trump's condition his medical team painted just minutes earlier. His team said Trump had been fever-free for 24 hours, kept oxygen levels at a healthy 96 percent, with other symptoms subsiding. The medical team dodged questions around whether Trump had ever received supplemental oxygen, and his temperature readings.

"Trump is 74, male and heavy, placing him in the most vulnerable group for COVID-19. He has been given steroids dexamethasone normally reserved for severely ill coronavirus patients, which shows that his symptoms are far more severe than reported," Yang Zhanqiu, deputy director of the pathogen biology department at Wuhan University, told the Global Times on Monday. "If we remember the treatment to the epidemic in Wuhan, critical patients were given dexamethasone. It is effective for severe patients, who are also given supplemental oxygen, or put on a ventilator. It is not advisable for those with mild symptoms because it contains many hormones."

The White House's withholding of key information has led to suspicions that the president is not in a good condition, said Yang.

Public doubts were also raised after watching his message from the Walter Reed Medical Center on Saturday night, where some film editors noticed a glitch to hide Trump's cough when he saying the word "therapeutics." "Clearly a cut here. Hard to imagine any rationale other than persuading the American public that he is healthier than he actually is," a Twitter user said.

Trump was taken to Walter Reed Friday, but a few US news outlets reported Saturday that Trump had trouble breathing Friday, and was given supplemental oxygen to maintain his oxygen level during his journey to Walter Reed.

"If he only had mild symptoms, he would have been quarantined rather than hospitalized, given America's lax measures and standards on the outbreak. He is unlikely to be released from the hospital until nucleic acid tests are negative, and the possibility of leaving on Monday looks slim."

But another Beijing-based immunologist who requested anonymity believes that small doses of dexamethasone are commonly used for general drip, or for mild symptoms. "It depends on what dose is given to the president."

It is also important to pay attention to Trump's previous underlying conditions and complications, particularly his experience with bacterial infections, which can damage his immunity, the expert said.

There is insufficient information and evidence to suggest a severe condition for Trump so far. At least he was able to talk properly, and get outside temporarily."

Trump's Sunday night outside surprised and worried many, as he waved to his supporters inside an SUV outside the hospital.

His brief trip alarmed Secret Service agents and medical professionals, including a doctor affiliated with the hospital, who said others in the vehicle risked their lives for "political theater," Washington Post reported.

It also raised the concerns of Chinese netizens, who are closely following Trump's status during the National Day holiday. The image of Trump's leaving hospital became a popular hashtag on Chinese Twitter-like Sina Weibo, with many calling on stricter precautions and concern for others.

"It's dangerous to ride with the infected president in the same car! Poor protective equipment, no garments, enclosed space…it is obvious that he [Trump] put others in the car at great risk. It seems that he still ignores the seriousness of such a super contagious and deadly virus, which is a pity for Americans," a Weibo user said.