SYDNEY, Sept. 7 (Xinhua) -- A Chinese-built firefighting robot has stood out as a highlight of a fire and emergency management conference which concluded on Friday in Perth, Western Australia (WA). The three-day Australasian Fire and Emergency Services Authorities Council (AFAC) conference, the largest of its kind in Australasia, aims to bring together the latest in emergency response knowledge and research for organizations from around Australia and the world.

"This conference is a great opportunity for emergency management professionals to come together to share their knowledge and skills and lessons learnt from recent emergencies," WA emergency services minister Francis Logan said.

One of the stars of this year's conference was a robot created by Chinese company, CITIC Heavy Industries, which drew a lot of attention from attendees in what was its first public appearance in Australia. 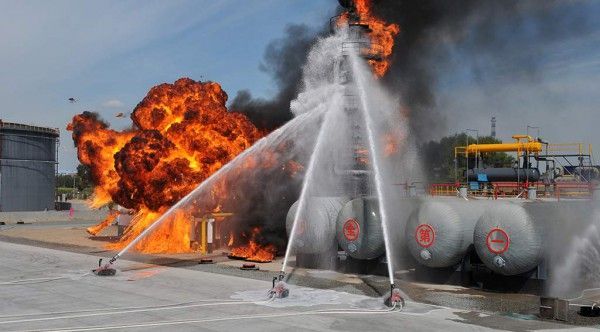 The RXR-MC80JD, which resembles a small, ultra-modern tank, is a firefighting robot designed to enter situations deemed too dangerous for humans in order to suppress fires and conduct reconnaissance.

Wang said that he hopes the robot will be implemented in Australian fire and rescue as he believes it can help local personnel conduct their operations more effectively and safely.

According to Wang, the caliber of technology at the conference overall was impressive, as well as the way in which fire and emergency response groups are benefiting from advancement in that area.

"It's good to see a lot of technology being shown this year in Perth with drones, with specific technology, and a lot of robots," Wang said.

"It certainly gives us a lot of ways and a lot of paths that we didn't think were possible before."