OWERRI, Nigeria, Oct. 13 (Xinhua) -- A leading Chinese green industry enterprise Elion Resources Group on Saturday signed a Memorandum of Understanding (MoU) in Nigeria as part of its exploration of investment opportunities in the country, particularly in desertification control, agriculture and development of new energy resources. 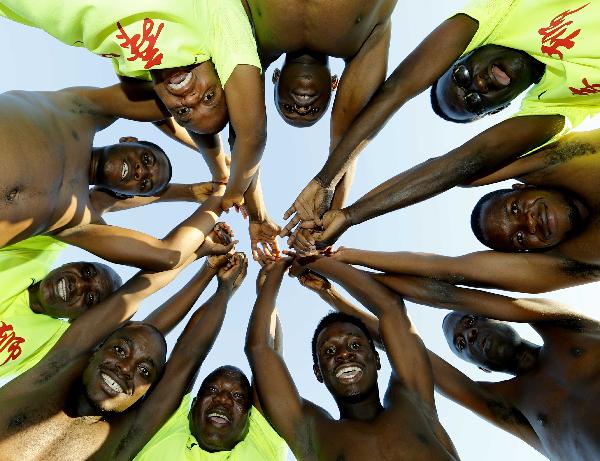 A delegation of the group led by Wang Wenbiao, its president, met and signed the MoU with the government of Imo State in the country's southern region, with the two parties expressing their readiness to unlock and harness the potential of natural gas resources to increase domestic and industrial power supply, raise people's living standard and support sustainable economic growth and diversification.

Imo, with an estimated population of 5 million, is the fifth largest Nigerian state by gross domestic product and one of the states with high reserves of natural gas.

Elion Resources Group, which was founded in 1988 in Kubiqi, one of China's deserts, aims to restore eco-environment and broaden its business to other environmentally-related areas, as well as realize the aim of using 100 percent renewable energy by 2030.

Wang said the investment exploration in Nigeria followed the success of the Forum on China-Africa Cooperation (FOCAC) summit in Beijing last month, in which China proposed green development as part of eight new initiatives to strengthen and broaden cooperation with Africa.

He said Elion Resources Group and the Imo State government was considering forest restoration, clean energy, electricity, and power based on clean energy as likely areas of cooperation within the shortest possible time.

"I think coming to Nigeria will help in boosting the economy, education and poverty alleviation," said Wang, who earlier met President Muhammadu Buhari to discuss the Chinese firm's intention on the sidelines of the Beijing summit of FOCAC.

Speaking on the partnership, Governor Rochas Okorocha of Imo said the desire of Elion Resources Group to invest in the state would go a long way to solve its power generation challenges.

"Elion can develop the power sector of our economy. All our problems have been that of power, and gas is power. We have been waiting for this long to see who can move our gas into power so that the economic life of the people can change," Okorocha said.

According to the governor, the investment move will also shore up the economy of Imo State and create employment in a geometric progression.

He said a technical committee has been set up to design a proper framework of cooperation between the two partners within a period of two months after which a commercial agreement will be signed.