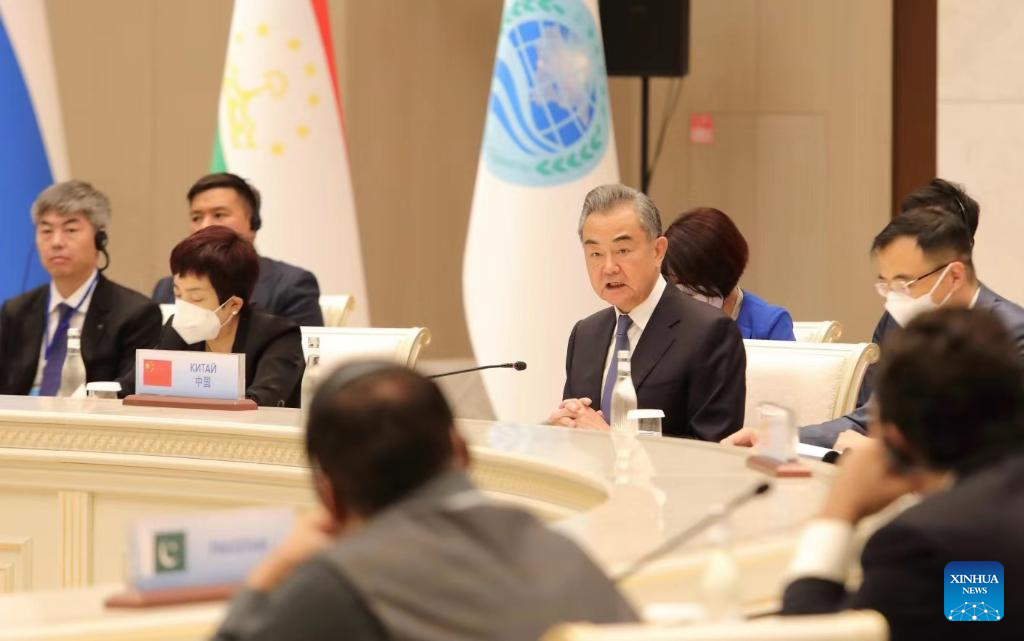 During the meeting, Wang said that the world today is entering a new period of turbulence and transformation, profound changes unseen in a century are resonating with the most serious pandemic in 100 years, and international and regional hotspot issues keep cropping up.

Chinese President Xi Jinping has grasped the pulse of historical development and echoed the voices of people from all over the world. He proposed the Global Development Initiative and the Global Security Initiative, contributing Chinese wisdom and public goods to solving the problems of the times, which has received positive responses from the international community, including the SCO member states, Wang said.

Faced with the arduous task of development and stability, we must uphold the Shanghai Spirit, work together and help each other to build a closer SCO community with a shared future, the Chinese top diplomat said, who also put forward a five-point proposal.

Wang stressed that China will take the hosting of the SCO prime ministers' meeting in November this year as an opportunity to promote the coordinated and efficient development of the regional economy.

China has always regarded the SCO as a priority in its diplomacy, and will use its own development to help the development of countries in the region, and inject more positive energy into the security of all countries and the well-being of the people, he said.

The foreign ministers who participated in the meeting fully affirmed the important role played by the SCO in consolidating the strategic mutual trust among member states, promoting regional development and prosperity, and deepening people-to-people bonds. They believed that solidarity and coordination should be further strengthened, and multilateralism should be activated, so as to adapt to the rapidly changing international situation.

They agreed to expand mutually beneficial cooperation, improve the level of regional connectivity, and believed that the SCO will play a greater role in promoting the stability of international production and supply chains.

They also pledged to make good use of the rich cultural resources of countries in the region and strengthen people-to-people and cultural exchanges and cooperation. They discussed the establishment of the SCO Development Bank and agreed to advance the SCO membership expansion process in an orderly manner.

All parties spoke highly of the work of Uzbekistan which holds the SCO's rotating presidency, and supported the SCO Secretariat and regional anti-terrorist agencies to strengthen their own construction and provide stronger guarantees for the organization's cooperation in various fields.

The meeting made comprehensive preparations for the SCO summit in the city of Samarkand to be held this autumn, and also adopted draft documents that will be submitted to the summit for deliberation.