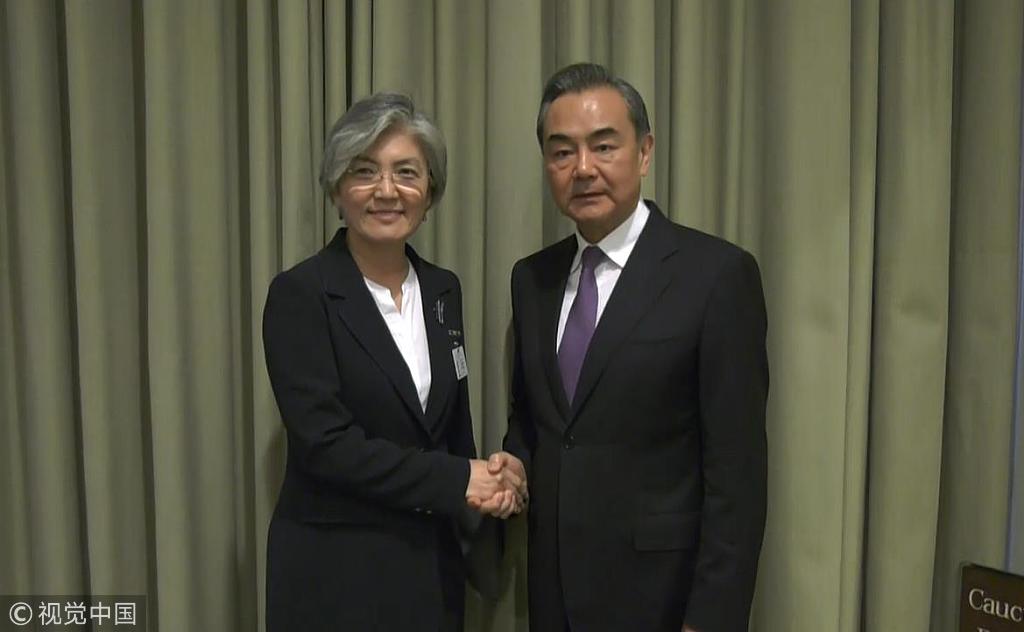 Speaking at a United Nations Security Council meeting on the Korean Peninsula issue, Wang said that the situation on the peninsula has witnessed important positive developments so far this year, with the nuclear issue returning to the track of dialogue and negotiation.

The Democratic People's Republic of Korea (DPRK) and South Korea have seen an all-round improvement of their relations, he said.

China applauds the political decisiveness and courage demonstrated by DPRK and South Korean leaders and firmly supports the two countries to turn their leaders' consensus into concrete actions, said Wang, adding that China also supports the DPRK and the United States to maintain their dialogue and meet each other halfway so as to obtain more tangible results.

Noting that China has made unremitting efforts and invested great energy in this cause, Wang said the recent positive developments on the peninsula are exactly what China has been working for over the years.

At this juncture, the Security Council has the responsibility and necessity to send a united and clear signal to accelerate the political settlement of the peninsula issue, he said, calling on all parties to work together for a peaceful and stable Korean Peninsula.

The peninsula issue is essentially one about security. To realize peace on the peninsula, the key is to address the legitimate security concerns of all parties in an appropriate and balanced manner, he said.

The DPRK should suspend its nuclear and missile tests and gradually dismantle related facilities, and the United States and South Korea should suspend their military exercises. On this basis, a timely release of a war-ending declaration will help build basic trust among concerned parties, further facilitate denuclearization and put in place the conditions needed for a final peace accord, he added.

All related parties should make joint efforts to build a completely denuclearized peninsula, Wang added, noting that denuclearization is an important prerequisite to lasting peace on the peninsula.

China believes that the most effective way is to promote denuclearization in parallel with the building of a peace mechanism on the peninsula, so that the two can be settled together. The main players in this process are the DPRK and the United States, but all stakeholders are obligated to make their respective efforts, said Wang.

The six-party talks remain as an indispensable multilateral platform. The UN Security Council should also form consensus in a timely manner to facilitate and support this process, he said.

Wang also emphasized the importance of making joint efforts to build a peninsula featuring win-win cooperation, since the denuclearization is ultimately aimed at bringing the people on the peninsula and in the region a safe, tranquil and happy life.

The international community should welcome the DPRK's important decision to shift its national strategy to economic development, Wang said. "We hope that the day when denuclearization is achieved is also when development and rejuvenation prevail on the peninsula."

Wang stressed that the Security Council's resolutions related to the DPRK must continue to be implemented fully, completely and accurately.

China firmly believes that exerting pressure is not an end. The Security Council resolutions demand both implementing sanctions and promoting political settlement. The two must be advanced in parallel, not in a partial or selective way, he said.

Given the positive developments in the inter-Korean and the DPRK-US relations, China believes that the Security Council needs to consider invoking, in due course, reversible provisions to encourage the DPRK and other relevant parties to make bigger strides toward denuclearization, said Wang.

This year marks the 65th anniversary of the Korean War Armistice Agreement, Wang said, adding that to realize a complete denuclearization and build a peace mechanism on the peninsula has always been China's stance and become a shared international consensus.

China calls on all related parties to demonstrate political courage, advance dialogue and negotiation, and together work for durable peace on the peninsula. China will continue to make its due contributions, said Wang.