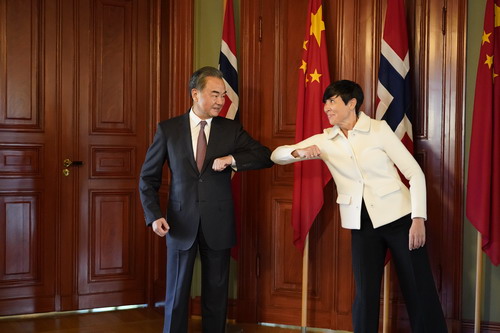 Photo via the website of the Chinese Foreign Ministry

Wang made the remarks while meeting the press with Norway's Foreign Minister Ine Marie Eriksen Soreide.

Calling his talks with Soreide "fruitful", Wang said bilateral relations in the next stage need to act out three principles in order to help speed up global economic recovery and improve global governance.

First, China and Norway should continue to pursue a health and stable development of their ties.

Although China and Norway are far away from each other and have different national conditions, bilateral relations can maintain steady and sustained growth with stronger political foundation as long as the two countries continue to respect each other, treat each other as equals and effectively accommodate each other's core interests and major concerns, Wang said.

Wang called on both sides to speed up FTA negotiations and reach an agreement as soon as possible, which, in the face of the pandemic, will be vital to promoting economic and trade cooperation between the two countries and maintaining an open and interconnective global supply chain.

China attaches importance to the issue of Norwegian seafood exports to China and is willing to establish communication channels with Norway to provide more facilitation while ensuring food safety, Wang added.

Moreover, China and Norway will work toward establishing a mechanism for maritime cooperation and dialogue and discuss the signing of Blue Partnership agreements, Wang said, adding that the two sides should also sign an inter-government cultural cooperation MoU and tax treaties as early as they can, and strengthen cooperation in winter sports.

Highlighting Norway's unique role in international affairs, Wang noted that China and Norway are both the beneficiaries and supporters of globalization, multilateralism and free trade, and have always been opposed to unilateralism and protectionism.

China congratulates Norway on its election as a non-permanent member of the United Nations Security Council for 2021-2022, and stands ready to establish consultation mechanisms with Norway for multilateral policy matters, Wang said.

China is willing to have closer cooperation with Norway within multilateral frameworks such as the United Nations and the World Trade Organization, as well as on issues such as peace mediation and development assistance, Wang said.

Norway is the third leg after Italy and the Netherlands in Wang's first foreign tour as the COVID-19 epidemic eases. The official visit in Europe from Aug. 25 to Sept. 1 will also take him to France and Germany.