WORLD Chinese FM expounds on right way for China, US to develop relations in new era

Chinese FM expounds on right way for China, US to develop relations in new era 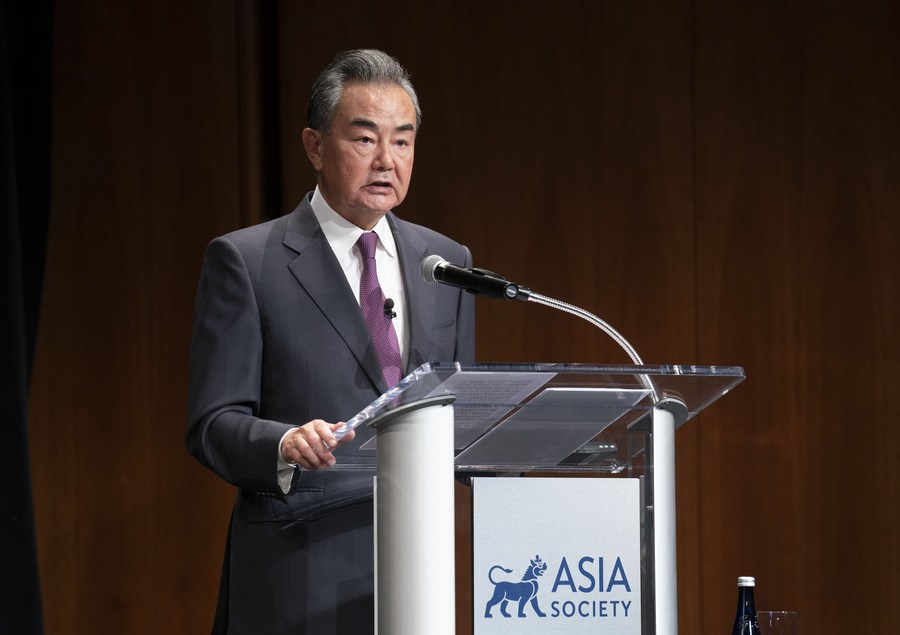 Chinese State Councilor and Foreign Minister Wang Yi expounds on the right way for China and the United States to develop relations in the new era while making a keynote speech at the headquarters of Asia Society in New York, the United States, Sept. 22, 2022. (Photo: Xinhua)

NEW YORK, Sept. 23 (Xinhua) -- Chinese State Councilor and Foreign Minister Wang Yi, making a keynote speech here on Thursday at the headquarters of Asia Society, expounded on the right way for China and the United States to develop relations in the new era.

Following his speech, Wang also answered questions at the headquarters regarding the role of the head-of-state diplomacy in stabilizing China-U.S. relations, as well as on the status quo of the Taiwan question.

Wang said in his speech that the implications of the China-U.S. relations have gone far beyond the bilateral level to have global influence. It is the common expectation of the international community that China and the United States play a leading role in international affairs, shoulder the responsibility undertaken by major countries, stabilize the bilateral ties and promote global cooperation.

The heads of state of the two countries shared the view that efforts should be made only to improve rather than sabotage the bilateral relations, that China and the United States should not engage in conflicts or confrontation, and that the two sides should enhance communication and cooperation, Wang said.

He said that the United States repeatedly provokes China when it comes to issues related to China's core interests as well as its development rights and interests, all the while proposing that stability of the bilateral relations be maintained, that conflicts and confrontation between them be avoided.

Such acts are contradictory both logically and practically, he said.

The root cause for this inconsistency is the misperception of the United States about China, the world and itself, Wang said, adding that be it inciting "all-out confrontation" with China or agitating "strategic competition" with China, they all deviate from the right track of China-U.S. relations.

As for the right way for the two countries to get along with each other, Chinese President Xi Jinping has already presented a clear answer, that is Beijing and Washington should respect each other, coexist peacefully and forge win-win cooperation, he noted.

Without respect, there is no trust, and without trust, there is no way to avoid conflicts or to carry out real cooperation, Wang said, calling it important experience gained from China-U.S. exchanges and a basic prerequisite for China-U.S. relations to return to the right track.

China will not become another United States, Wang said, adding neither is the United States able to change China based on its own likes and dislikes.

Since neither China nor the United States can knock the other over, they should respect each other's choices, he said.

China is glad to see an open, confident, developing and progressive United States, and so should the United States respect the development path chosen by the Chinese people, which is socialism with Chinese characteristics, Wang said.

China will unswervingly follow the path and the direction it has chosen independently, and will march forward more steadily and make greater progress, he said.

On peaceful coexistence, Wang said whether China and the United States are partners or adversaries, and whether they should cooperate or confront with each other -- these are fundamental issues in China-U.S. relations on which disruptive mistakes must not be made.

Wang made it clear that China chooses peace, sticks to peaceful development, and regards peaceful coexistence as its most essential expectation for China-U.S. relations.

In order to realize peaceful coexistence, China and the United States should abide by the rules agreed by both sides, which, on a bilateral level, are the three Sino-U.S. joint communiques and the important consensuses reached between the two leaders, rather than domestic laws imposed upon one another, and which, on a global level, are the basic norms governing international relations based on the purposes and principles of the UN Charter, Wang said.

On win-win cooperation, Wang said that no cooperation can be based on a "You-lose-I-win" scenario, and that win-win cooperation is not only possible, but also a must, which is the reality the two sides experienced over the past half-century, and also the common goal they should continue to strive for.

China does not deny that there are competitions between the two countries in such areas as economy and trade, and neither is China afraid of such competitions, Wang said.

Wang said the Chinese side is willing to forge more beneficial cooperation with the United States under the premise of equality and respect.

Win-win cooperation is inseparable from the necessary conditions and atmosphere, he said, noting that the U.S. side cannot be on the one hand harming China's core interests and on the other requiring China for unconditional cooperation.

In the Q-and-A session after the keynote speech, Wang stressed that the head-of-state diplomacy plays an irreplaceable strategic leading role in China-U.S. relations.

U.S. President Joe Biden has made the commitments that the United States does not seek a new Cold War with China; it does not aim to change China's system; the revitalization of its alliance is not targeted at China; the United States does not support "Taiwan independence" and it has no intention to seek a conflict with China, which, apparently, have not been honored by Biden's governing team in either its detailed policies or its actions toward China, Wang said.

In his speech, Wang also elaborated on the Taiwan question, which he said is the core of China's core interests.

The Taiwan question has been posing ever bigger risks in China-U.S. relations, and it would very likely cause disruptive impacts on bilateral relations if handled improperly, he said.

From the Shanghai Communique in 1972, to the China-U.S. Joint Communique on the Establishment of Diplomatic Relations in 1978, and to the August 17 Communique in 1982, the United States has put a clear commitment down in black and white that there is but one China in the world, that Taiwan is part of China, and that the Government of the People's Republic of China is the sole legal government of China, Wang said.

Successive U.S. governments have all made it clear to abide by the one-China policy, and many U.S. presidents have stated their positions against "Taiwan independence," all of which have been put on record, he noted.

The Taiwan question arose as a result of weakness and chaos in the Chinese nation, and will surely be resolved as China realizes national rejuvenation, Wang said, adding that this meets the trend of history and reflects the aspiration of the people.

The United States should stand on the right side of history, he stressed.

The Chinese foreign minister said in the Q-and-A session after his speech that China has been clear in its policy on the Taiwan question, that is, it will strive for peaceful reunification with all-out efforts and utmost sincerity.

This policy has maintained continuity and stability, he added.