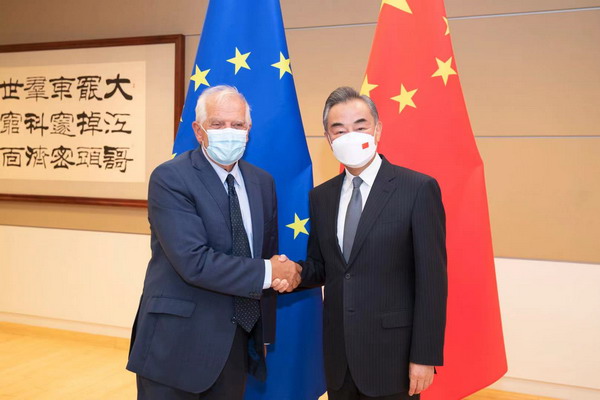 As the world enters a period of turbulent evolution, China and the EU, as two major forces in a multi-polar world, should shoulder their due responsibilities, stick to the basic position of being strategic partner each other, and maintain the sound momentum of dialogue and communication, Wang said, expressing belief that the EU will maintain strategic autonomy and work with China to promote the steady and sustained growth of bilateral relations.

The two sides should also seek common ground while shelving differences, refrain from treating each other as rivals, and refrain from reducing cooperation because of competition, he added.

The two sides should hold a new round of high-level strategic dialogue at an early date, and strive to launch high-level dialogues on economy and trade, green development, digital as well as people-to-people and cultural exchanges within this year, Wang said. 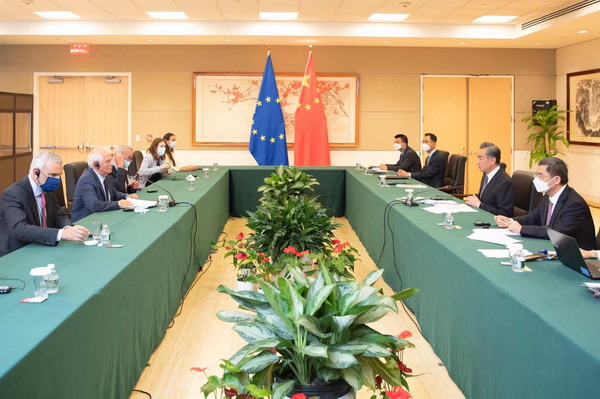 The two sides should also step up dialogue and cooperation in the fields of macro-economy, finance, supply chain, energy and climate change to jointly address global challenges, he added.

Noting that today, the world is out of order and Europe faces challenges to stability, Borrell said that the EU attaches great importance to China's status and role as a major country, which is indispensable to addressing global challenges and safeguarding the postwar order.

The EU is willing to continue to maintain strategic communication with China and give full play to the role of high-level dialogue mechanisms in various fields, Borrell said.

The EU is deeply concerned about the possibility of nuclear proliferation and hopes that China will exert its important influence to jointly find a way out of the problem, he said.

Wang said that at the moment, the Ukraine situation is showing a trend of prolongation and expansion, and that its negative spillover effects are becoming more severe, which China does not want to see. He noted that at present the most pressing task is to bring the conflict to an end.

China will neither stand by nor add fuel to the fire, but will continue to play its role in its own way, Wang said, adding that China supports the EU and major European countries to continue to actively mediate and make every effort to strive for peace.