NEW YORK, Sept. 24 (Xinhua) -- Chinese State Councilor and Foreign Minister Wang Yi said on Monday that healthy and stable development of China-US relations is critical to both countries as well as both peoples and is also indispensable for international peace, stability and development. 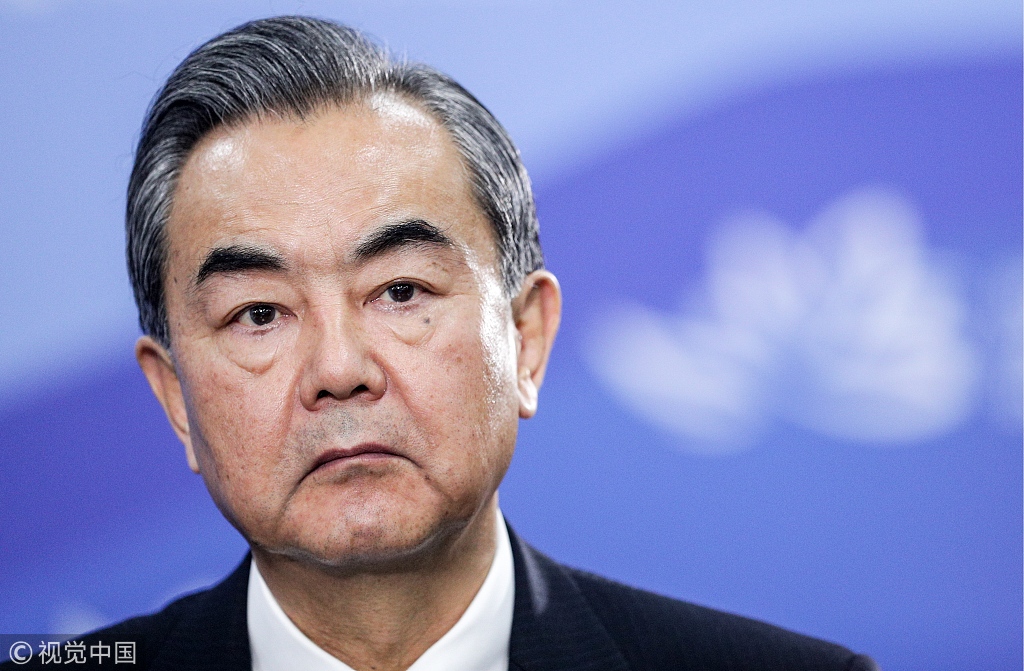 Wang made the remarks at a meeting here with representatives from the National Committee on US-China Relations and the US-China Business Council, during which they exchanged views on such issues as China-US relations and bilateral economic and trade cooperation.

Wang said that China and the United States are the world's largest developing country and developed country respectively; the two nations are also top two economies around the globe and both are permanent members of the UN Security Council.

Noting the two countries are going to usher in the 40th anniversary of the establishment of diplomatic relations, Wang said the most important experience gained by the two sides in the past 40 years is that only through cooperation can a win-win situation be attained, and confrontation will certainly lead to a lose-lose scenario.

The two sides must unswervingly move towards in the direction of cooperation, especially when encountering problems and disturbance, said Wang.

Wang pointed out that recently, negative postures of the US policy on China are on the rise. Some forces have repeatedly and groundlessly blamed China in such fields as economy, trade and security, creating sentiments of opposition and poisoning the relationship atmosphere.

The accusations toward China are not true and irresponsible; if left unchecked, they will destroy the achievements of China-US relations in the past 40 years, which is unfavorable for the two countries as well as the international community, said Wang.

China always advocates that any problem between China and the United States can be resolved through equal and frank dialogue, he said.

Wang said that the Chinese and the US economies are highly integrated, and bilateral economic and trade cooperation has brought huge benefits to industries and customers of both sides.

To cut off the economic relationship between China and the United States, which has been claimed by some people, is unrealistic and harmful, he said.

China and the United States are the largest emerging market and the biggest mature market respectively, said Wang, adding that the Chinese market is related to the livelihood of every US family.

If the two sides can cooperate with each other actively, the US economy can attain lasting vitality from the Chinese market, and China can promote its development through the US market, Wang said.

As for questions about China's market access, China's reform and opening-up as well as structural adjustment of its economy, Wang stressed that China will firmly deepen reforms and expand opening-up to the outside world.

After its entry into the World Trade Organization, China reduced the average tariff level to 9.8 percent, over-fulfilling its tariff reduction commitments. And the tariff level is below the average of developing countries, Wang noted.

The number of sub-sectors opened by China in service trade market has reached 100, far exceeding the average number of 54 of developing countries and approaching the level of developed nations, he said.

Wang said currently, China is seeking development of high quality, and deepening structural reform is part of the endeavor.

Chinese President Xi Jinping has stressed many times that China's door of opening-up will only become wider, and a series of new measures have been and will be continuously launched, Wang noted.

Yet China is still a developing country and it needs to advance the process of reforms based on its national conditions in an orderly and self-determined manner, he added.

Wang pointed out that China has no intention of seeking a trade surplus and is willing to resolve trade imbalances through consultations.

However, dialogue should be built on equality and integrity and cannot be carried out under threats or pressure, Wang said.

The US side launched a larger scale of unilateral tariff-slapping action in the run-up to a new round of dialogue, which indicates that the United States has no sincerity to solve the problem, he said.

Wang thanked members of the National Committee on US-China Relations and the US-China Business Council for making long-term efforts in promoting cooperation between the two countries.

He also expressed his hope that they can play a positive role in healthy development of China-US relations and win-win cooperation between the two sides.

Representatives from the National Committee on US-China Relations and the US-China Business Council said good relations between the United States and China are in the fundamental interests of both sides.

Over the past 40 years, both the United States and China have benefited greatly from bilateral relations and cooperation between the two sides, said the representatives.

Most people from US business circle do not agree to solve the current problem by slapping tariffs, and the rhetoric and actions to try to regard China as a hostile force is wrong, said the representatives.

The United States and China need to strengthen dialogue, particularly at this moment, enhance mutual understanding and solve problems in development of bilateral relations through consultations, they said.

In the long run, the two sides need to transcend specific issues such as trade, and conduct strategic communication on the long-term development of bilateral relations, they added.

The US side said that the US-China economic and trade cooperation has been a stabilizing force for bilateral relations for a long time, and the US business circle has been a firm supporter for US-China relations.

The US business circle sincerely hopes to resolve structural problems in bilateral economic and trade relations through pragmatic dialogue and constructive ways including promoting discussion and signing of bilateral investment agreements, said the US side.

The National Committee on US-China Relations and the US-China Business Council are willing to continuously play a role in promoting the development of bilateral relations on a right track, the US side added.