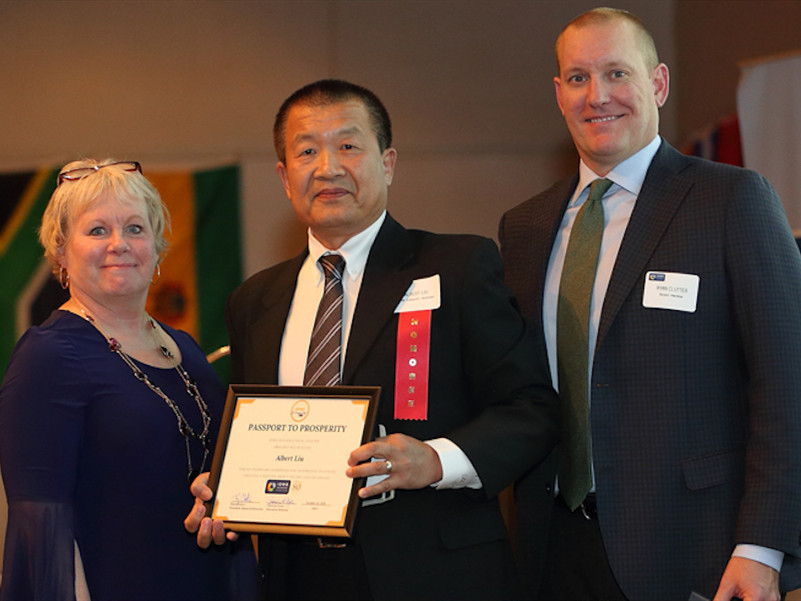 CHICAGO, Nov. 7 (Xinhua) -- An American Chinese entrepreneur has been awarded with special honor for his contribution to US-China friendship, promoting cultural exchange in the US midwestern state of Iowa.

"Albert has been a brilliant and critical resource for Iowans across the state. He is informed and sincere, which has added so much to the way Iowans and Chinese are able to appreciate each other's cultures." the nomination letter for Liu said.

One of Liu's major contributions includes his role in orchestrating the sister city relationship between Iowa's Muscatine and China's Zhengding.

Liu worked as the director of Asian sales for Musco Lighting from 2010 to early 2018 and visited Muscatine often. Eventually he met Sarah Lande, who helped him get involved in the Muscatine community, particularly in volunteering to develop the relationship with China.

In 2012, Liu organized and led a delegation of five members from Muscatine including Mayor Hopkins and Sarah Lande to visit four cities in China to start the sister city relationship with Zhengding. For these efforts, he was also awarded with a Gold Key to the City of Muscatine by Mayor Hopkins and the Muscatine City Council.

Liu came to live in Iowa in 1994 as an immigrant from China. During that time, he became involved with the IIC when he volunteered for one of their programs to welcome and give orientation to new international students.

Since then he has served with state and local boards, committees, and businesses dedicated to building a strong relationship between Iowa and China.

Based in Des Moines, capital of Iowa, IIC is a non-profit organization, providing personal and professional opportunities linking Iowans with peoples from around the world.