BEIJING, March 6 (Xinhua) -- The All-China Journalists Association Friday issued a statement voicing strong condemnation and firm opposition to a demand made by the U.S. State Department to cap the number of U.S.-based Chinese journalists. 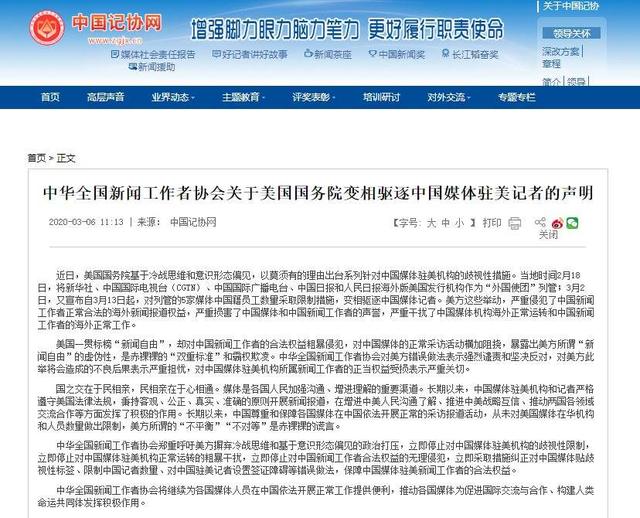 While priding itself on freedom of the press, the United States now grossly infringes upon the legitimate rights and interests of Chinese journalists and obstructs the Chinese media from their normal reporting tasks. "Such two-faced behavior exposed its hypocrisy in so-called freedom of the press, nothing short of double standards and hegemonic bullying," the association said in the statement.

Chinese journalists stationed in the United States have been strictly abiding by U.S. laws and regulations and carrying out news reporting under the principle of objectivity, fairness, truthfulness and accuracy, playing a positive role in enhancing communication and understanding between the Chinese and U.S. people, promoting strategic mutual trust between China and the United States, and enhancing exchanges and cooperation in various fields between the two countries, the statement said.

China has respected and guaranteed the media of various countries to carry out normal reporting activities in the country in accordance with the law, and has never imposed any restriction on the number of U.S. media organizations or personnel in China, it added.

The association called on the United States to abandon its Cold War mentality and political oppression based on ideological prejudice.