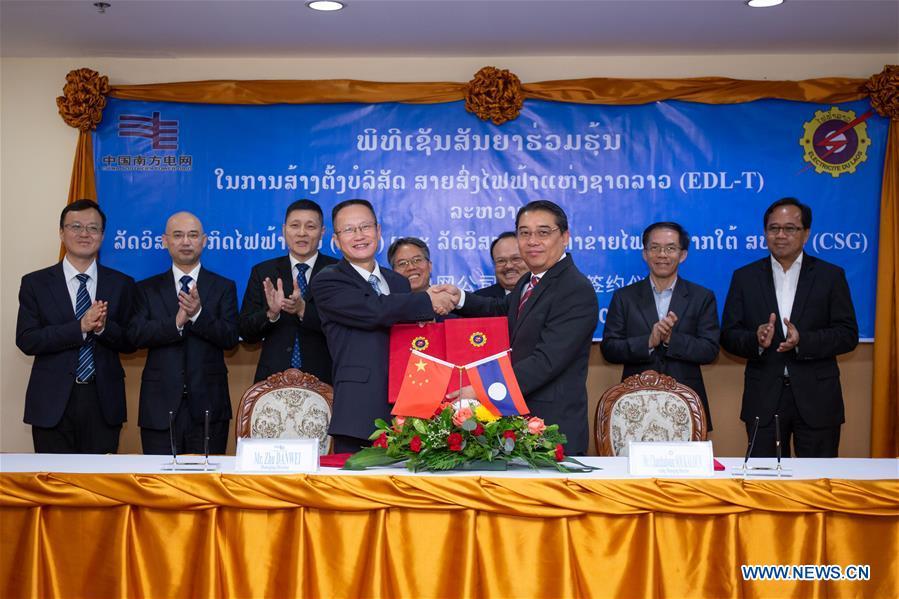 The signing of the agreement on Tuesday marks a significant progress in enhancing win-win cooperation between Laos and China in the power industry, CSG officials told Xinhua on Wednesday.

Founding EDLT is an important step in building the China-Laos community with a shared future, and is also the latest achievement of the third Lancang-Mekong Cooperation leaders' meeting held in late August, according to the CSG.

Khammany Inthirath, Lao minister for energy and mines, said that the EDLT, a key project in the industrialization process in Laos, will help provide self-sufficient and stable power supply to support the country's development, as well as reinforce the infrastructure connectivity with neighboring countries.

The Lao minister believed that with CSG's advantages in experience, technology and human resources, the EDLT will bring a fresh outlook to the Lao power industry.

Jiang Zaidong, the Chinese ambassador to Laos, said during the signing ceremony that the founding of the EDLT takes the first step to implement the important consensus reached on the third Lancang-Mekong Cooperation leaders' meeting, which calls for strengthening the power connectivity in Lancang-Mekong countries.

He said the two companies should enhance cooperation to serve the national strategies of Laos, to improve Lao people's livelihoods, and to achieve mutual benefit and win-win results.

The Chinese ambassador also highlighted the importance to follow market principles and make its operating mechanisms market-based for the high-level development of the EDLT.

According to the Shareholders' Agreement, the EDLT will operate under the regulation of the Lao government, taking advantage of CSG's financial strength and mature experiences in power grid construction, operation and management to move forward the construction of the national backbone power grids in Laos.

The EDLT will provide power transmission service to the EDL with safety, reliability, efficiency, accessibility and sustainability.

The EDLT will enable Laos to strengthen power grid connectivity with its neighboring countries for transforming its water resource into economic benefits, so as to support Laos' effort to build itself as the "battery of clean energy" in Southeast Asia.